Browse: Home / 2015 / May / 25 / Analysis: Coinciding Maxima Of Three Natural Cycles Ends…Cooling Ahead As They Turn Negative!

In Natural Cycles In A Random World Are Unmistakable…Future Holds Nothing To Fear, we showed plots of simulated temperature generated in Excel using the sum of three cycles and a random number generator. 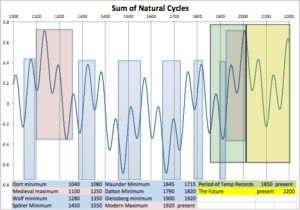 Figure 1 is the sum of the three natural cycles, the 62, 204, and 1040-year cycles. The green rectangle outlines the historical temperature record, from 1850 to 2015. The blue rectangles highlight cold periods, the red rectangles the warm periods. The numbers are the beginning and end years for each period. Yellow highlights the future.

Note that in figure 1, the cycles in the green rectangle follow the known temperature record. See figure 2, below. The rest of the plot, before the known period, reflects what we know generally about the Medieval Warm  Period and the Little Ice Age. I leave it to the reader to interpret the future. 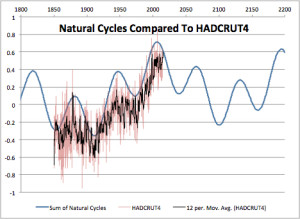 Figure 2 plots the natural cycles from figure 1 and the HADCRUT4 global anomaly index. The vertical offset is due to the HADCRUT4 baseline choice.

The three natural cycles are not, of course, as fixed in frequency or amplitude as in these Excel plots. As we go back in time, the climate that actually occurred will drift from these calculations. But we know that the Roman warm period occurred about a thousand years before the Medieval warm period, and that it happened with about a 200 year cycle imposed on it.

There are several papers that discuss 1470 ±500 year cycles. Those that occurred during the last ice age are labeled Dansgaard-Oeschger events. In the Holocene, they are called Bond events. The Bond events tend to happen at 1000 year intervals, thus the ±500 year error margin. Solar scientists refer to a thousand year plus Hallstaat Cycle that looks like the thousand-year cycle used here. Bond events and the Hallstaat Cycle appear to be the same thing.

During the last ice age there were also deeper periods of cold known as Heinrich events. These occur at approximately 10,000 year intervals. During the last ice age, these events tended not to be sine-wave in shape, but punctuated cold intervals. Bond events in the Holocene such as the 5.4 and 8.2 kilo-year events also appear as abrupt cooling followed by equally abrupt warming. Figure 3 is a plot of Bond events from Bond et al. data here. The last column “stacked” data was used for this plot. It is a combination of several proxies. The resolution is 70 years between points, so only the longer cycles are resolved. Both scales have been reversed to match figure 1. 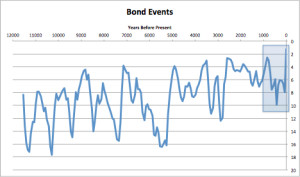 Figure 3 is a plot of Bond events in the Holocene. The outlined area is the time covered by figure 1 up to the present. Down is cold, up is warm. The 70-year resolution captures only the longest of the warm and cold periods in the last one thousand years, the Medieval Warm Period, and the Wolf, Spörer and Maunder cold periods. 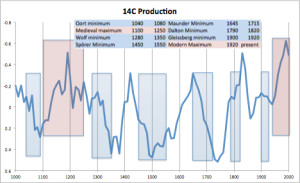 Figure 4 is a plot of carbon-14 production at the top of the atmosphere. This plot is also from Bond et al. from the same source as above. The cold and warm periods are highlighted as in figure 1.

The 200 year cycles appear solar-based. The resolution in figure 4 is 10 years. Cold periods happen when 14C production is declining, warm periods when it is increasing. As 14C is produced by cosmic rays at the top of the atmosphere, there is a delay before it appears as captured carbon in living things.

If past temperatures are related to known solar and ocean cycles with increasing precision in the modern era, then future temperatures will also be related. The present warming is simply a Bond warming event just like more than a dozen similar and even more dramatic warming events in the last 10,000 years. The recent warming is simply climate following natural cycles. We are now at the peak of the sum of three cycles, each cycle also at a peak, a grand maximum. What follows will be cooling as all those cycles go negative.

22 responses to “Analysis: Coinciding Maxima Of Three Natural Cycles Ends…Cooling Ahead As They Turn Negative!”