Browse: Home / 2015 / May / 14 / Natural Cycles In A Random World Are Unmistakable…Future Holds Nothing To Fear

Recently, Roy Spencer posted a graph that appeared to be a data record of some kind for the last 100 years. Then he revealed that it was generated in Excel with a simple random number function. The graph showed details that resembled things like El Niño’s and La Niña’s, pauses, and sudden warming and cooling.

I decided to repeat his graph introducing cycles into the mix. We know that the climate follows ~60 (AMO ocean cycle), ~210 (de Vries or Suess solar cycle), and ~1000 year (un-named) cycles (approximately). The following is a graphic of what happens if these cycles are introduced into the random number generator. The graph extends to 1014 simulated years by month. The random number generator is constrained to + and – 0.5, and each month adds 0.9 of the value of the previous month. The cycles use the sine function (SIN()) with input from the fractional year value, multiplied by 0.1 to produce a 62 year cycle, 0.029 to produce a 215 year cycle, and 0.006 to produce a cycle just over 1000 years. For this last cycle the COS function was used to shift the cycle phase by 90 degrees. Each month, 1/40th of each cycle value is added along with the 0.9 of the previous month. This produces a graph that roughly resembles earth’s climate over the last 1014 years with extension to the next 200. 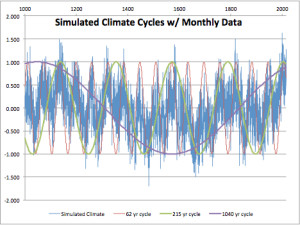 Figure 1 is a simulation of the last 1014 years, with the applied climate cycles shown. 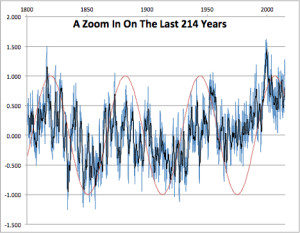 Figure 2 is a magnification of the last 214 years from Figure 1. Blue is monthly data, black is the annual average, the red trace is the simulated AMO 62-year cycle.

In figure 1, we see a Medieval Warming period and two periods of Little Ice Age. A minimum is seen that resembles the Dalton Minimum of the early 1800s, and the cool 1910s and 1970s appear. Even the cool Maunder Minimum appears in the correct place. Most of this result is not coincidence because the 62-year cycle is timed to match the real AMO, and the 204-year and 1000-year cycles roughly match real solar activity.

In this simulation, two successive warming periods very like the actual twentieth century warming periods, can occur from natural cycles alone, no extra “forcing” from CO2 is required.

So, what will the future bring? Now that we have this model, that reflects the past, as we know it, with general accuracy, can we project that into the future? Sure…this is just an Excel spreadsheet after all. I pasted on 200 more years. As I did so, Excel of course recalculated the whole table. So here is a second example of the last 214 years that it came up with, in case someone accuses me of “cherry-picking”. Note that we get much the same pattern of warming and cooling, with a couple of El Niño’s in approximately the right place in the last 20 years. 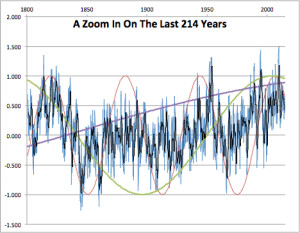 Figure 3 is another calculation of the same period as in figure 2. The black trace is an annual average of the monthly data. All three cycles are shown.

Note the resemblance between figures 2 and 3. Each is a different calculation using different random numbers, yet the small addition of non-random sine wave cycles pushes the output into shapes that resemble the climate that happened in this period. 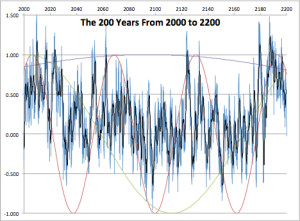 Figure 4 is the future, as projected by our model. The black trace is an annual average of the blue monthly data. All three cycles are shown.

As you can see, the future holds nothing to fear. There will be a few El Niño’s in the next ten years, then a moderate cooling as we come off the peak of the 62 and 204 year cycles. There will be more of those in mid-century, as the AMO rises again, then more cooling for a period at the end of the century as both of those cycles bottom out. No extensive warm periods will appear until late in the twenty-second century, as both peak again.

This model is not new. On the side-bar of this blog, an illustration from Nicola Scafetta’s model is similar, with the addition of some shorter cycles. An earlier post on this blog from a paper by Prof. H. Luedecke and C.O. Weiss (cited above) also used a similar model. The chief addition is random “weather”.

No CO2 molecules were harmed in the generation of these graphs. Nor, for that matter, were they considered.

For those with Excel expertise, I have posted the file to Dropbox here.