Share this…FacebookTwitterStefan Rahmstorf: No pause, anywhere! By Michael Krueger [Translated by P. Gosselin) “No pause, anywhere!” announced Stefan Rahmstorf in his latest article at KlimaLounge. And he added: “As our long-term readers know, there’s been a steady global warming since the 1970s, though it has been superimposed by the usual short-term fluctuations, it has not […] 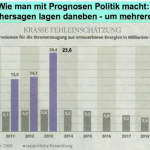 Share this…FacebookTwitterThe Germany-based European Institute for Climate and Energy (EIKE) held another conference on climate and renewable energy last March. One of the speakers was Prof. Dr. Dieter Ameling, an expert in heavy industry. EIKE has posted his presentation. In the presentation Ameling calls Germany’s Energiewende (transition to renewable energies) a real threat to industry, […]

Share this…FacebookTwitterSpiegel science journalist Axel Bojanowski interviews Oliver Geden, climate expert at the Berlin-based German Institute for International and Security Affairs – SWP. He is also an advisor to the German government. 2°C target “an illusion” In the interview Geden calls the 2°C limit target “an illusion that has been fed by politicians and scientists“. […]

Share this…FacebookTwitterTornadoes are normally associated with the famous Tornado Alley of the US Midwest. But they also occur from time to time in Germany. Nowadays the drama-seeking media are quick to report on any tornado event that gets recorded, and so often there’s the mistaken perception that their frequency is rising (of course due to man-made […]

Share this…FacebookTwitterGerman online finanztreff.de here reports on the opinion recently expressed by Prof. Hans-Werner Sinn, Director of the renowned Munich-based ifo-Institute for Economic Research, regarding Germany’s attempted move into renewable energies, primarily solar and wind power. Currently about 25% of Germany’s energy supply is “green”. At a conference of experts in Berlin Sinn is quoted […] 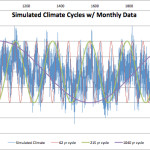 Share this…FacebookTwitterBy Ed Caryl Recently, Roy Spencer posted a graph that appeared to be a data record of some kind for the last 100 years. Then he revealed that it was generated in Excel with a simple random number function. The graph showed details that resembled things like El Niño’s and La Niña’s, pauses, and […]

Share this…FacebookTwitterNo warming in Antarctica. Southern Ocean Cooling Down By Dr. Sebastian Lüning and Prof. Fritz Vahrenholt [Translated by P Gosselin] In Antarctica if a single piece of ice breaks off, the media worldwide go into a frenzy: How could it happen? That’s got to be climate change. Yes, global warming is striking Antarctica with […]

Share this…FacebookTwitterScience-ethically dubious: Stefan Rahmstorf silent on large body of dissenting Gulf Stream results in newspaper interview By Dr. Sebastian Lüning and Prof. Fritz Vahrenholt [Translated, edited by P Gosselin] There was an interview with Stefan Rahmstorf in the German daily Märkischen Allgemeine Zeitung (MAZ) on March 23, 2015: A tipping element on which the […]

New Paper On Atolls: “There Has Been A 7.3% Increase In Net Island Area Over The Past Century”!

Share this…FacebookTwitterWhat else can be said about all the doom and gloom nonsense from UN scientists surrounding the atolls and sea level? A new paper that is just out should make them red with embarrassment. This new paper tells us that the atolls are doing just fine and are gaining in area! Read the paper’s abstract […] 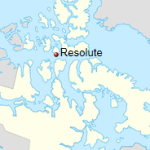 Share this…FacebookTwitterOn the folly scale, the following story is right up there with the Antarctic Ship of Fools. Unfortunately this one ended in a terrible tragedy. Global warming researchers Marc Cornelissen and Philip de Roo believed to have perished in the Arctic. Photo Twitter. The online Spiegel here reports that two Dutch researchers, Marc Cornelissen, 46, and […]

Share this…FacebookTwitterThe Sun in April By Frank Bosse and Prof. Fritz Vahrenholt [Translated, edited by P Gosselin] The sole real source of energy for our planet also was also below normal in April: The sunspot number (SSN) was 54.4. Taking the average of the previous 23 cycles, that is only 70% of what is average […] 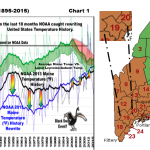 Share this…FacebookTwitterResponse to NOAA’s claim adjustments are improvements By Mike Brakey The email from NOAA’s Derek Arndt confirms that they conducted a massive rewrite of U.S. data in 2014. He also confirmed that the 1913 Maine climate data was indeed lowered a whopping 40F as noted in my article, Black Swan Climate Theory. My response […]