The Germany-based European Institute for Climate and Energy (EIKE) held another conference on climate and renewable energy last March. One of the speakers was Prof. Dr. Dieter Ameling, an expert in heavy industry. EIKE has posted his presentation.

In the presentation Ameling calls Germany’s Energiewende (transition to renewable energies) a real threat to industry, warning that the country faces a de-industrialization.

Already, Ameling reminds us, every day the Energiewende in Germany is progressing and that the damage already done is getting even worse and that “foremost it will soon be irreparable“.

At the 5:15 mark he calls the German government’s 2022 targets for renewables “economic nonsense” and will result in “electricity getting continuously more expensive“.

His following chart shows a comparison of the German government’s projected green energy subsidies compared to that of reality: 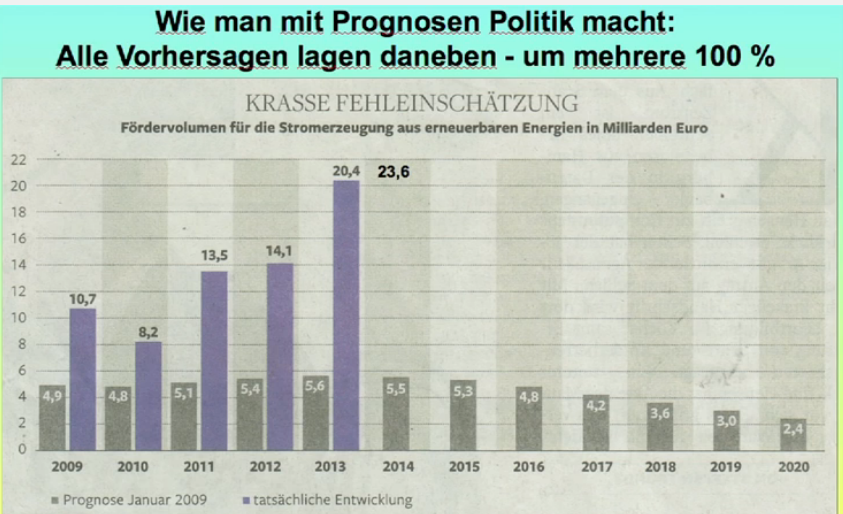 The big problem, Ameling emphasizes, is the huge supply-volatility in wind and sun, which are totally weather-dependent. At the 9:35 mark the retired professor calls the German state of Bavaria’s energy-mix plan for 2022 as something that “cannot function“…”is unaffordable“, and “is absolute imbecility“.

The chart at the 11:20 mark shows how Germany has one of the highest electricity prices worldwide, more than double the rate found in USA, Canada, or Russia. 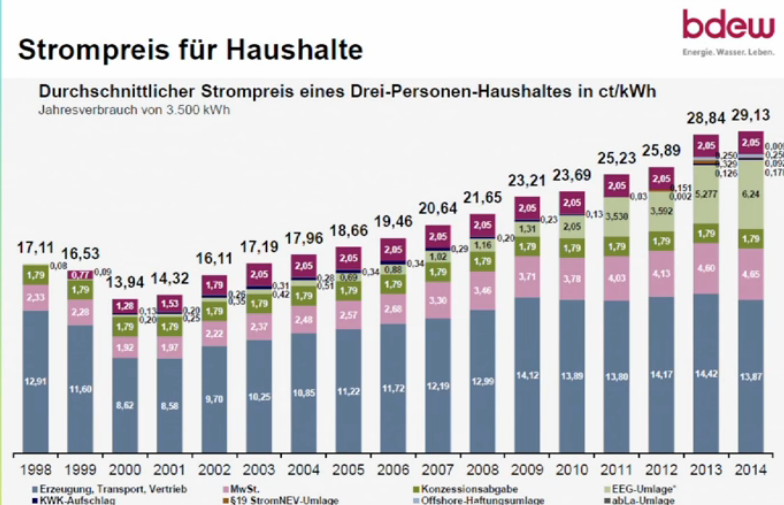 Since 2000 the price of electricity in euro-cents/kwh in Germany has more than doubled! Currently a 4-person household is paying over 366 euros a year just for the green energy feed-in tariffs alone. Ameling warns that figure will continue to rise rapidly.

Later in the presentation Ameling shows how the energy-intensive industries such as cement, glass, steel, chemicals etc. are being hit hard by the skyrocketing energy costs. In Germany alone 3.5 million jobs depend on the steel industry. At the 19:03 mark Ameling warns that the exodus of industry “has already begun” with heavyweight companies such as ThyssenKrupp, Norsk Hydro, BASF, SGL Carbon and Voest moving operations abroad.

How much is Germany’s Energiewende projected to cost? In 2013 former Environment Minister Peter Altmaier told the Frankfurter Allgemeine Zeitung it would cost Germans 1 trillion euros! 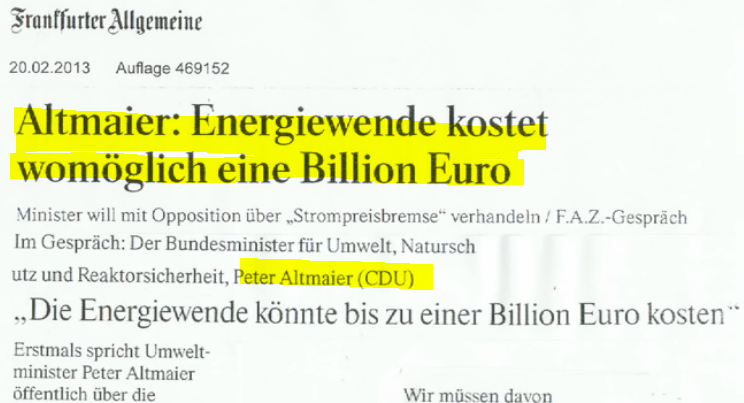 At the end Ameling summarizes, announcing that the “Energiewende has failed” because it is simply too expensive and too volatile. The infrastructure that is needed to handle it is not even in place. Unless Germany radically alters the current direction of its Energiewende, Ameling says it will be “bye bye Germany“.

He ends the presentation with the following Friends of Science image, reminding us that CO2 is not even the driver of climate.