Browse: Home / 2015 / May / 09 / Energy Physicist Implores NOAA To Return To Credibility… “Get Out Of Adjusting Business”!

Response to NOAA’s claim adjustments are improvements
By Mike Brakey

The email from NOAA’s Derek Arndt confirms that they conducted a massive rewrite of U.S. data in 2014. He also confirmed that the 1913 Maine climate data was indeed lowered a whopping 40F as noted in my article, Black Swan Climate Theory.

My response is based on actual unadjusted temperature data from the Lewiston-Auburn area of Maine, which I secured from a local source and provided in prior emails. (I have attached that data and links to the websites the data was extracted from).  As shown in Chart 1, between 1895 and 1937, the Lewiston-Auburn region (Zone 19 in Chart 2) was typically ¾0F warmer than Maine’s overall state average, based on NOAA data I downloaded in 2013.

This data is the black line on Chart 1. I would expect the Lewiston-Auburn area to be slightly warmer than Maine as a whole because it is in southern Maine. Based on the 2013 data, Maine’s average temperatures were about ¾0F colder or less than those for Lewiston-Auburn during the period from 1904 to 1939, and again from 2008 through the present.

The green shaded area shows what the NOAA data would have looked like if that ¾0F difference had remained constant through 2015.  Looking at the year 1913, I might agree with Mr. Arndt that they had an error and I would understand a temperature correction of approximately  ¾0F, but not 40F.

I am suspicious of the NOAA data, both the original from 2013 and the revised, between 1940 and 2008 because the Maine average temperatures are so significantly less than those for the Lewiston-Auburn region. The other oddity is that there was a downward trend in temperatures for Lewiston-Auburn starting in 1998. However, both sets of NOAA data show temperatures rising for the state of Maine during that same time period.

In conclusion, I implore NOAA to return credibility to its website, by getting out of the statistical smoothing and adjusting business and by just providing the scientific community with the basic unfiltered temperature data at all of its site locales. Let’s stay away from all the havoc created between Charts 3 and 4. 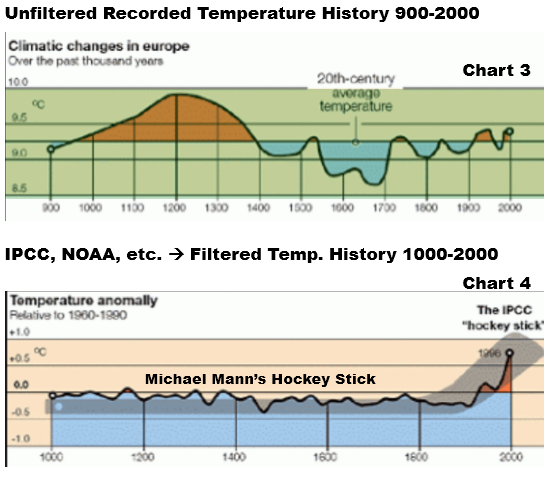 Watch the entire series of YouTube videos on how I found the NOAA adjustments.

14 responses to “Energy Physicist Implores NOAA To Return To Credibility… “Get Out Of Adjusting Business”!”