Browse: Home / 2015 / May / 10 / Global Warming Scientists Perish In The Arctic …A Lethal Publicity Stunt In Servitude Of Sensationalist Science?

On the folly scale, the following story is right up there with the Antarctic Ship of Fools.

Unfortunately this one ended in a terrible tragedy.

The online Spiegel here reports that two Dutch researchers, Marc Cornelissen, 46, and Philip de Roo, 30, are assumed to have died in the Arctic. “They wanted to collect data about the melting ice cover.”

According to Cornelissen’s Twitter site, the pair began their expedition in late March. By early April they has set off on skis across Arctic sea ice accompanied by a husky. They had been posting daily reports at Twitter. 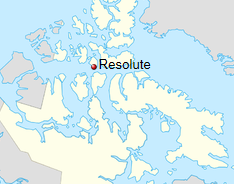 At times Cornelissen tweeted of unusually warm temperatures and even posted audios claiming to be skiing in shorts.

On April 29 things took a turn for the worse and the pair sent out an SOS while traveling near Bathurst Island, approximately 200 kilometers north of Resolute Bay.

On April 30 Cornelissen’s Twitter site posted that the two were missing.

Spiegel writes that it is suspected that one of the pair fell through “thin ice” and that their situation went unknown for a week. A Canadian search party found one body but the other member of the party remains missing. It is assumed that he has perished. Only the husky dog survived.

The site Cold Facts here posted a report stating that the ice conditions there were “very poor”. The two researchers are said to have been experts in their fields. Question: Why were the two trekking on ice conditions described as “very poor”? Shouldn’t experts know better?

Also it needs to be asked if the decision to send out two researchers on foot in dangerous and highly unpredictable conditions was a grossly negligent one. Who approved this? Today modern satellite altimetry and aerial instrumentation can measure ice conditions more far accurately, safely, and efficiently. Why send out two men on foot on thin ice when the Arctic melt season is well under way?

Personally I think the expedition smacks more of a piss-poorly judged publicity stunt by activists, and much less a scientific expedition to explore the unknown. This looks to be highly dim-witted and reckless adventurism in servitude of sensationalist science. There needs to be an independent inquiry into this accident.

Negligence in harsh conditions often carries a lethal price. Unfortunately some of us still have to learn the hard way.

45 responses to “Global Warming Scientists Perish In The Arctic …A Lethal Publicity Stunt In Servitude Of Sensationalist Science?”