You gotta wonder what President Obama will be thinking when he visits the northern city of Hanover later today. Ironically the US global warming president may be confronted with snow tomorrow morning as he gets set to pitch further steps with regards to TTIP and global warming to Chancellor Angela Merkel. 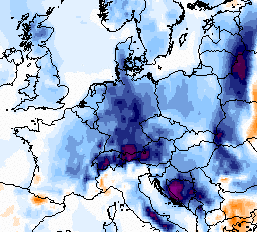 Temperature anomalies of more than -10°C are forecast to hit many areas of Europe in the days ahead.

A blast of polar air is now super-cooling the European continent and delivering unusual late April snows and frosty conditions even down in the lowlands, where the German city of Hanover is located.

German weekly, Stern, writes at its online newsite: “Experts even advise putting the winter tires back on” and warns of icy streets in the lowlands by Monday morning! The Stern clip calls the snow for this time of year “unusual”.

High profile meteorologist Joe Bastardi tweeted: “rest of April in Europe.. about as cold as it can get this late.”

Online Bild here bears the headline: ” Polar air frosts the spring away– and will stay!”

The DWD German national weather service reported that the temperature at the Lower Saxony Brocken summit (1140m) was -5°C just some 100 or so kilometers away from Hanover, where President Barack Obama is scheduled to arrive to open up the Hanover industrial trade show.

Al weather forecasts agree that the bitter cold will persist through much of the week. Experts warn of frost damage to blossoming plants.

To be fair, much of far eastern Europe and Russia are enjoying warmer than normal spring weather, and so we do not want to give readers the impression that the Europe cold means the globe is cooling. Such a trick, after all, is the kind of stuff the global warming alarmists routinely resort to. Remember how back around New Year’s the media and alarmists were jumping up and down, hollering that the North Pole was melting – trying to make us think it was all because of global warming? In fact that was just the reverse of what is happening in Europe right now. And never mind that snow was supposed to become “a thing of the past” even in the dead of winter.

Moreover the euro-warmunistas are now claiming that snow and cold we are seeing today has happened before at this time of year and thus is normal and we should not be surprised if it happens from time to time. But that’s just the point: our weather is no longer supposed to be “normal”. Climate change supposedly has changed all that. Yet there we have it: snow in late April, just like 100 years ago, back when that sort of thing used to happen once in a blue moon as well. Nothing (except the media reporting) has really changed that much.