So far this week where I live here in the North German flatlands people have woken up to surface frost three times already. And although temperatures are forecast to be pleasant today under sunny conditions, the temperature will drop rapidly come weekend. 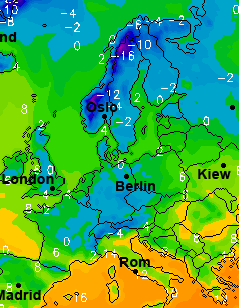 Joe Bastardi at his Daily Update here says it’s going to get “as cold as you’ll ever see it at this time of year”.

It’s going to get uncharacteristingly cold – not something we ought to expect after one hundred years of alleged accelerating global warming. In fact the 25-year trend in Germany shows spring arriving later and later – something the media will never tell us.

How icy is it supposed to get? German CHIP magazine here writes: “It sounds like a bad joke: This weekend it’s going to snow in many areas in Germany. Are we about to get hit by snow chaos in April?”

The chart above shows frosty conditions across much of Great Britain, France, Germany, Switzerland, Austria and Scandinavia by Monday morning.

A low pressure system will be bringing cold Arctic air down across Euroipe as daytime temperatures plunge below 10°C this weekend. At night temperatures will drop to around freezing and precipitation is expected to fall to elevations as low as 200 meters.

CHIP reports: “On Monday it could get even colder”.

Weather records show that the cold blast will make this year’s late April  one of the coldest in decades.

14 responses to “Central Europe’s Spring To Crash Back Into Winter …Snow Expected At Elevations Down To 200 Meters!”