Despite hyped claims, much doubt has emerged over the years on whether or not renewable energies such as wind and sun would able to substitute fossil and nuclear energy. 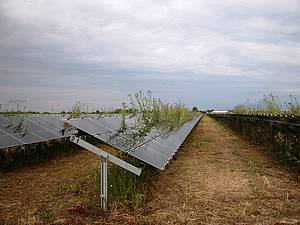 Getting a sound answer to that question naturally would have been a reasonable step to take long before countries rushed to invest tens of billions of euros in solar in cloudy northern Europe.

A brand new paper by Swiss researchers Ferruccio Ferroni and Robert J. Hopkirk published by the Journal of Energy Policy now further intensifies that doubt, finding that solar power remains an inefficient way to produce energy in most cases. It’s beginning to appear that Europe has wasted tens of billions of euros in a mass energy folly.

Thus it should not surprise anyone that Germany’s fossil fuel consumption has not been falling over the past years.

Many people believe renewable energy sources to be capable of substituting fossil or nuclear energy. However there exist very few scientifically sound studies, which apply due diligence to substantiating this impression. In the present paper, the case of photovoltaic power sources in regions of moderate insolation is analysed critically by using the concept of Energy Return on Energy Invested (ERoEI, also called EROI). But the methodology for calculating the ERoEI differs greatly from author-to-author. The main differences between solar PV Systems are between the current ERoEI and what is called the extended ERoEI (ERoEI EXT). The current methodology recommended by the International Energy Agency is not strictly applicable for comparing photovoltaic (PV) power generation with other systems. The main reasons are due to the fact that on one hand, solar electricity is very material-intensive, labour-intensive and capital-intensive and on the other hand the solar radiation exhibits a rather low power density.

So is solar energy a worthwhile alternative in places like Europe? The authors conclude that it is not. They write in the conclusion that “an electrical supply system based on today’s PV technologies cannot be termed an energy source, but rather a non-sustainable energy sink” and that “it has become clear that photovoltaic
energy at least will not help in any way to replace the fossil fuel“.

The authors add that “photovoltaic technology would not be a wise choice for helping to deliver affordable, environmentally favourable and reliable electricity regions of low, or even moderate insolation“.

Sounds like much of Europe has wasted very huge sums of money.