Michael Limburg of the European Institute for Climate and Energy here reports that Germany will miss its 2020 Greenhouse Gas (GHG) emissions reduction targets by a long shot ,despite the “huge costs” in the form of mandatory feed-in tariffs paid by consumers.

The country’s 2050 target of an 80% reduction is looking more like pie in the sky.

Originally Germany pledged on its own to reduce its greenhouse gas emissions by 40% compared to 1990 levels by 2020. Instead it appears the country will achieve only a 30% reduction. Much of these reductions occurred after the fall of Communist East Germany after the shut down of its horribly inefficient industry.

Over the past 10 years Germany has been struggling to reduce greenhouse gas emissions at all. The harsh reality is that Germany has not reduced GHG emissions in 7 years. 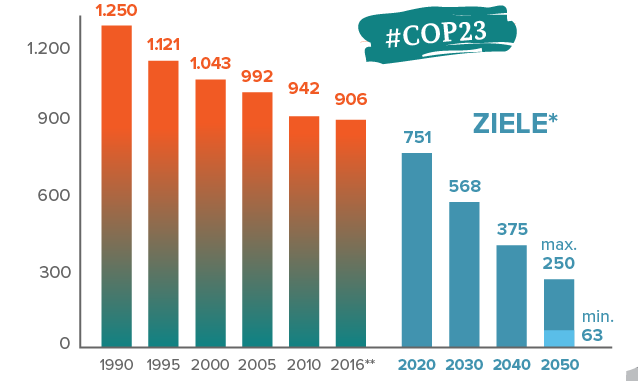 GHG emissions in CO2 equivalent in Germany and targets until 2050. Source BMUB German Ministry of Environment.

Though German environmentalists like putting climate change at the top of their list of major problems to tackle, Germany has done very little about it. Limburg notes that Germany’s share of global GHG emissions is too small to make any real difference at all. The country emits only 2.2% of the globe’s man-made CO2.

And now that Germany’s political pendulum has shifted to the right, progress on GHG reductions will likely grind to a near halt. On a global scale, Limburg says it is totally irrelevant concerning whether Germany meets its 2050 target or not. According to Limburg:

Anyone who speaks of Germany’s important contribution in reducing CO2 is not only unable to calculate, but it speaking nonsense or – to say it in new German – is purposely spreading fake news among the citizens.”