Yesterday at Weatherbell Analytics at his Daily Update, meteorologist Joe Bastardi pointed out a topic that particularly fascinated me, and which I think is very important: the urban heat island effect (UHI).

Many have been claiming for years that the urban heating has been in part responsible for the higher recorded global surface temperatures over the past couple of decades. All that concrete, asphalt and steel covering the surface of urban sprawl absorbs enormous amounts of heat, and thus drives up the local temperature – especially at night.

And it happens to be that many of the surface measurement stations are situated in urban surroundings, like at airports, and thus have at least in part corrupted the temperature dataset. What follows is an image cropped from yesterday’s Weatherbell Daily Update. 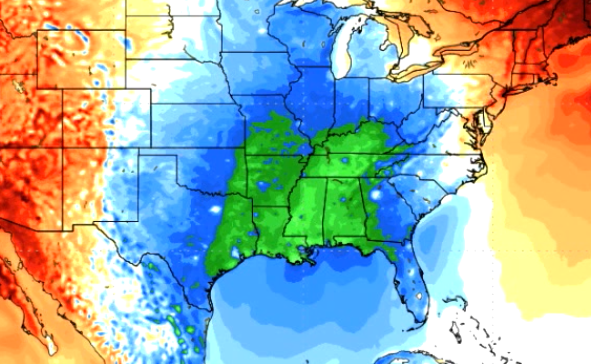 Above Joe Bastardi shows the GFS 1-6 day forecast for temperatures across the United States and points out that “the models are so good now that they are picking up the urban heat island (UHI) effect” and building them into the forecasts. Above readers will note that the major metropolitan areas (right where the stations happen to be placed) are all warmer than the surrounding regions.

Naturally what is the case in the USA is also the case to a greater or lesser extent in other metropolitan areas worldwide. Climate authorities try to remove these corruptive effects through a process known as homogenization, i.e. adjustments, but that too has been considered to be highly controversial, the root of much distrust, and the subject of possible corruption. Modifying data is fudging, and fudging means you can make the data tell whatever story you want to hear.

Over the years NASA has “adjusted” the surface temperature dataset multiple times, each time dubiously making the past cooler and the present warmer. Tony Heller has been pounding away at this questionable practice for years.

So if the advanced forecasts are now showing the urban heat island effect, then that effect of course is later getting recorded by the surface weather stations and thus having a significant impact on the raw global climate data. Now you know where much of the “global warming” is coming from. It’s likely an artefact of a measurement system that is not optimally positioned and whose data is being dubiously processed.