A few days ago, an international research group from the USA, Canada and Switzerland led by Lorenzo Polvani of Columbia University (New York) published a sensational study in Nature climate change, which attributes a large part of the warming of the 20th century to CFCs (“Substantial twentieth-century Arctic warming caused by ozone-depleting substances“). 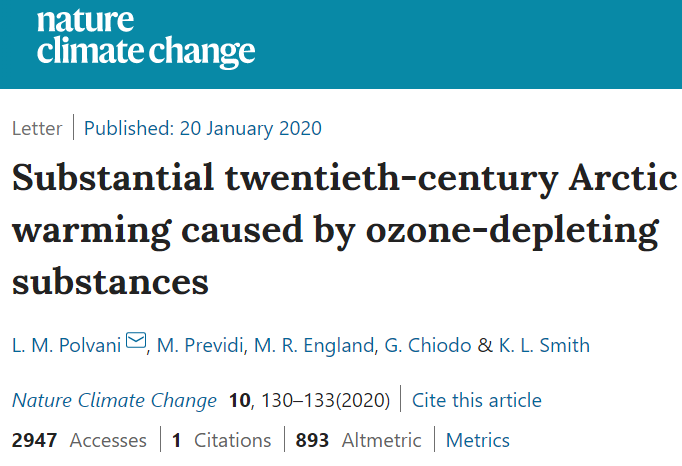 Using 10 climate models, the researchers calculated the global and Arctic temperature development, once with CFCs in the atmosphere and once without.

According to these models, from 1955 to 2005, global temperatures increase by 0.59 °C with CFCs and by 0.39 °C without CFCs. One third of the warming is therefore not caused by CO2 but by the CFCs.

If the remaining warming for CO2 is converted over the five decades, an average warming of 0.08 °C per decade remains. Not exactly a lot. CFCs have a 19000-23000 times stronger forcing than CO2.

Half of Arctic warming due to CFCs

In the Arctic, the CFCs had an even greater impact in the model calculations. As is well known, the warming there from 1955 to 2005 was greater than on a global scale, by 1.59 °C in the models. According to Polvani, without CFCs the increase would have been only 0.82°C, i.e. only half as much.

Half of Arctic melt due to CFCs

The authors conclude that the decrease of CFCs in the air due to the prohibition of the substances will substantially defuse the warming and the decrease of ice in the future. It is interesting that these clear conclusions called mainstream scientists to the scene. Piers Forster of the University of Leeds and John Fyfe of the Canadian University of Victoria asked the authors to change the sentence in the conclusion from “CFCs produce 1/3 of global warming and half of Arctic climate change” to “CFCs are an important contribution to the global climate system, especially in the Arctic”.

The numbers remain, but the interpretation is clouded because it would cause too much sensation. That’s how climate science framing works today.