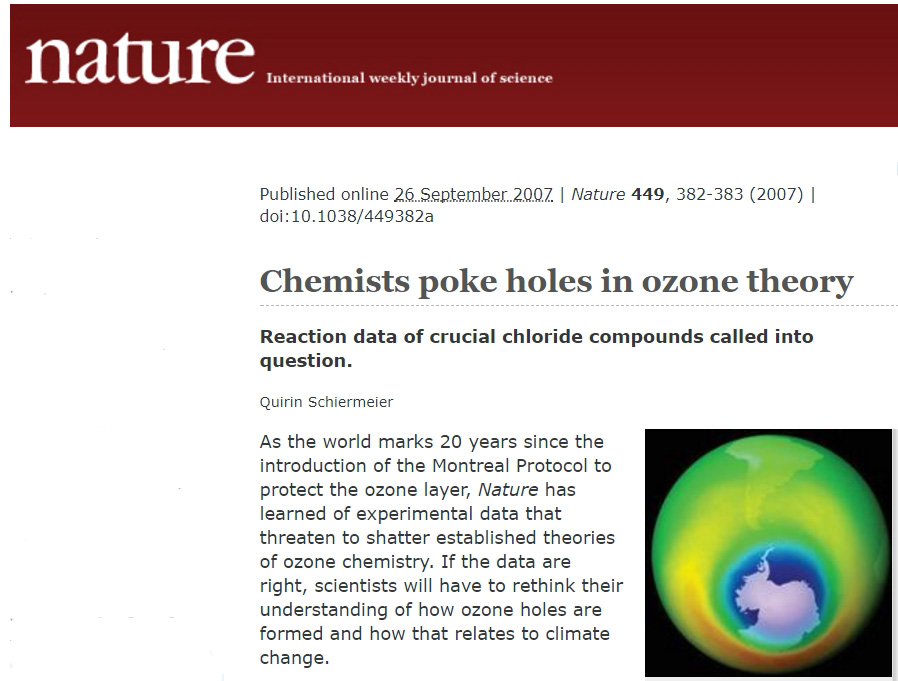 It was 10 years ago this month that scientists revealed an order-of-magnitude-sized error in molecular chemistry measurement that threatened to severely undermine the commonly accepted explanation for  how ozone depletion occurs.

The iconoclastic discovery fomented “much debate and uncertainty in the ozone research community.”    The mechanism that causes polar ozone destruction had, with one measurement, become more “unknown” than known.

With the stunning new evidence, a leading ozone researcher proclaimed that, “Our understanding of chloride chemistry has really been blown apart.”

But then, in the ensuing months and years after the measurement error had been exposed, there was . . . silence.

Rarely, if ever, was this discovery of a molecular rate change “substantially [ten times] lower than previously thought” brought to the public’s attention again.  Ostensibly because of a lack of appetite for admitting they may be wrong, scientists just seemed to . . . move on.

The 1980s zeitgeist that insisted we humans are the predominant cause of ozone depletion due to our ozone depleting substances emissions has been maintained for more than 3 decades now despite a growing body of contrary evidence that says variations in ozone density are predominantly determined by natural phenomena (meteorology, volcanic eruptions), not human emissions.

The ozone “hole” narrative and the widely-held perception that governmental policies determine how small or large the “hole” gets would appear to be analogous to the current climate debate and its connection to the governmental push to dramatically limit CO2 emissions.

As the world marks 20 years since the introduction of the Montreal Protocol to protect the ozone layer, Nature has learned of experimental data that threaten to shatter established theories of ozone chemistry. If the data are right, scientists will have to rethink their understanding of how ozone holes are formed and how that relates to climate change.

Markus Rex, an atmosphere scientist at the Alfred Wegener Institute of Polar and Marine Research in Potsdam, Germany, did a double-take when he saw new data for the break-down rate of a crucial molecule, dichlorine peroxide (Cl2O2). The rate of photolysis (light-activated splitting) of this molecule reported by chemists at NASA’s Jet Propulsion Laboratory in Pasadena, California, was extremely low in the wavelengths available in the stratosphere — almost an order of magnitude lower than the currently accepted rate. “This must have far-reaching consequences,” Rex says. “If the measurements are correct we can basically no longer say we understand how ozone holes come into being.”  What effect the results have on projections of the speed or extent of ozone depletion remains unclear.

The rapid photolysis of Cl2O2 is a key reaction in the chemical model of ozone destruction developed 20 years ago (see graphic). If the rate is substantially [10 times] lower than previously thought, then it would not be possible to create enough aggressive chlorine radicals to explain the observed ozone losses at high latitudes, says Rex. The extent of the discrepancy became apparent only when he incorporated the new photolysis rate into a chemical model of ozone depletion. The result was a shock: at least 60% of ozone destruction at the poles seems to be due to an unknown mechanism, Rex told a meeting of stratosphere researchers in Bremen, Germany, last week.

Other groups have yet to confirm the new photolysis rate, but the conundrum is already causing much debate and uncertainty in the ozone research community. “Our understanding of chloride chemistry has really been blown apart,” says John Crowley, an ozone researcher at the Max Planck Institute of Chemistry in Mainz, Germany.

“Until recently everything looked like it fitted nicely,” agrees Neil Harris, an atmosphere scientist who heads the European Ozone Research Coordinating Unit at the University of Cambridge, UK. “Now suddenly it’s like a plank has been pulled out of a bridge.”

NASA scientists have revealed the inner workings of the ozone hole that forms annually over Antarctica and found that declining chlorine in the stratosphere has not yet caused a recovery of the ozone hole. …. [T]wo new studies show that signs of recovery are not yet present, and that temperature and winds are still driving any annual changes in ozone hole size.

The classic metrics create the impression that the ozone hole has improved as a result of the Montreal protocol. In reality, meteorology was responsible for the increased ozone and resulting smaller hole, as ozone-depleting substances that year were still elevated. The study has been submitted to the journal of Atmospheric Chemistry and Physics.

“Ozone holes with smaller areas and a larger total amount of ozone are not necessarily evidence of recovery attributable to the expected chlorine decline,” said Susan Strahan of NASA’s Goddard Space Flight Center in Greenbelt, Md.

“We are still in the period where small changes in chlorine do not affect the area of the ozone hole, which is why it’s too soon to say the ozone hole is recovering,” Strahan said. “We’re going into a period of large variability and there will be bumps in the road before we can identify a clear recovery.”

Trends in trace atmospheric constituents can be driven by trends in their (precursor) emissions but also by trends in meteorology. Here, we use ground-level ozone as an example to highlight the extent to which unforced, low-frequency climate variability can drive multi-decadal trends. … Ozone trends are found to respond mostly to changes in emissions of ozone precursors and unforced climate variability, with a comparatively small impact from anthropogenic climate change. Thus, attempts to attribute observed trends to regional emissions changes require consideration of internal climate variability, particularly for short record lengths and small forced trends.

The changes in meteorology (not including stratospheric variations) and natural emissions account for 75 % of the total variability of global average surface O3 concentrations.

Regionally, annual mean surface O3 concentrations increased by 1.3 and 1.6 ppbv over Europe and North America, respectively, despite the large anthropogenic emission reductions between 1980 and 2005.

Scientists report that chemicals that are not controlled by a United Nations treaty designed to protect the Ozone Layer are contributing to ozone depletion.

In the new study, published today in Nature Geoscience, the scientists also report the atmospheric abundance of one of these ‘very short-lived substances’ (VSLS) is growing rapidly.

Recent research has demonstrated that the concentrations of anthropogenic halocarbons have decreased in response to the worldwide phaseout of ozone depleting substances. Yet, in 2015 the Antarctic ozone hole reached a historical record daily average size in October.

Model simulations with specified dynamics and temperatures based on a reanalysis suggested that the record size was likely due to the eruption of Calbuco, but did not allow for fully-coupled dynamical or thermal feedbacks. We present simulations of the impact of the 2015 Calbuco eruption on the stratosphere using the Whole Atmosphere Community Climate Model with interactive dynamics and temperatures. Comparisons of the interactive and specified dynamics simulations indicate that chemical ozone depletion due to volcanic aerosols played a key role in establishing the record-sized ozone hole of October 2015. The analysis of an ensemble of interactive simulations with and without volcanic aerosols suggests that the forced response to the eruption of Calbuco was an increase in the size of the ozone hole by 4.5 million km2.

Chlorofluorocarbons (CFCs), chemicals found mainly in spray aerosols heavily used by industrialized nations for much of the past 50 years, are the primary culprits in ozone layer breakdown.

In a rare bright spot for global environmental news, atmospheric scientists reported in 2016 that the ozone hole that forms annually over Antarctica is beginning to heal. Their data nail the case that the Montreal Protocol, the international treaty drawn up in 1987 to limit the use of ozone-destroying chemicals, is working.

[P]ublic engagement was key to solving the ozone problem, with people coming together to identify an issue that threatened society and develop new technologies to fix it. In that respect, the most successful environmental treaty in history holds lessons for dealing with a much bigger threat, she says — climate change.

17 responses to “Flashback 2007: Scientists Reveal They ‘No Longer Understand How Ozone Holes Come Into Being’”