Browse: Home / 2017 / May / 18 / Another New Paper Traces Variations In Temperatures, Precipitation To Variations In Solar Activity

To Solar Forcing – No CO2 Attribution 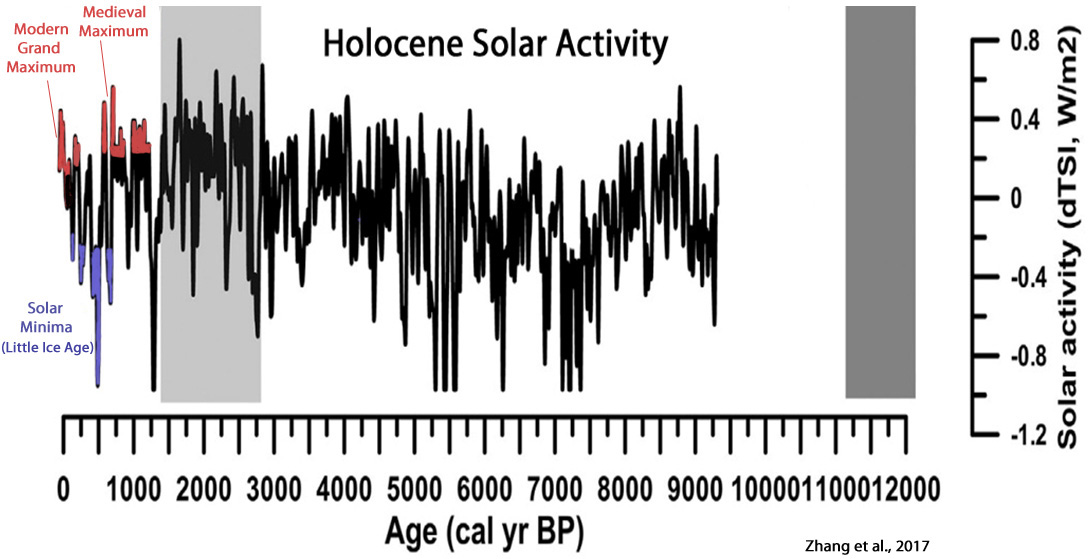 In recent months, there have been dozens of papers published in the scientific literature ascribing variations in temperature and precipitation (climate) to corresponding variations in solar forcing.

Another new paper, Zhang et al., 2017, has just been published online.  The nine scientists contributing to the research place special emphasis on the relationship between solar activity and climate for the Qinghai-Tibetan Plateau region of Central Asia for the last 10,000-12,000 years.

The authors link high and low solar activity to correspondingly high and low temperatures and precipitation.  Undulating millennial- and centennial-scale temperatures are found to vary by about 2.5°C throughout the Holocene.   No mention is made of carbon dioxide as an influential factor affecting climate change.

Although the instrumental record for the region documents an abrupt warming in recent decades (which aligns with the Modern Grand Maximum), the proxy evidence from subfossil chironomids used to reconstruct temperature does not show a significant or unusual regional warming trend during the last century.

1.    The record suggests the summer temperature varies by ~2.5 °C across the entire period. A generally warmer period occurred between c.8500 and c.6000 cal yr BP and a cooling trend was initiated from c.5500 cal yr BP. The overall pattern broadly matches the summer insolation at 30N and the Asian Summer Monsoon records from the surrounding regions suggesting that summer temperatures from the southeast margin of the QTP [Qinghai-Tibetan Plateau] respond to insolation forcing and monsoon driven variability on a multi-millennial time scale. Modifications of this overall trend are observed on the finer temporal resolution and we suggest that solar activity could be an important mechanism driving the centennial-scale variability. It may have a strengthened effect in the late Holocene when the monsoon influence weakened.

2.    We highlight that solar activity likely plays an enhanced role in changes of summer temperatures because of the high elevation of the QTP when the monsoon is weaker. The results also indicate that summer temperature variability at the QTP responds rapidly to solar irradiance changes in the late Holocene.

4.   All three records broadly follow the decreasing trend of summer insolation at 30 N (Berger and Loutre, 1991) and this pattern is widely recorded across southern and eastern Asia including from Dongge and Qunf Caves (Dykoski et al., 2005; Fleitmann et al., 2007). The trend is marked by a broad shift to lower average summer temperature values from ~5500 cal yr BP in the lake records, suggesting that long-term summer temperature and precipitation changes in southwestern China respond to changes in insolation forcing (Gray et al., 2010). 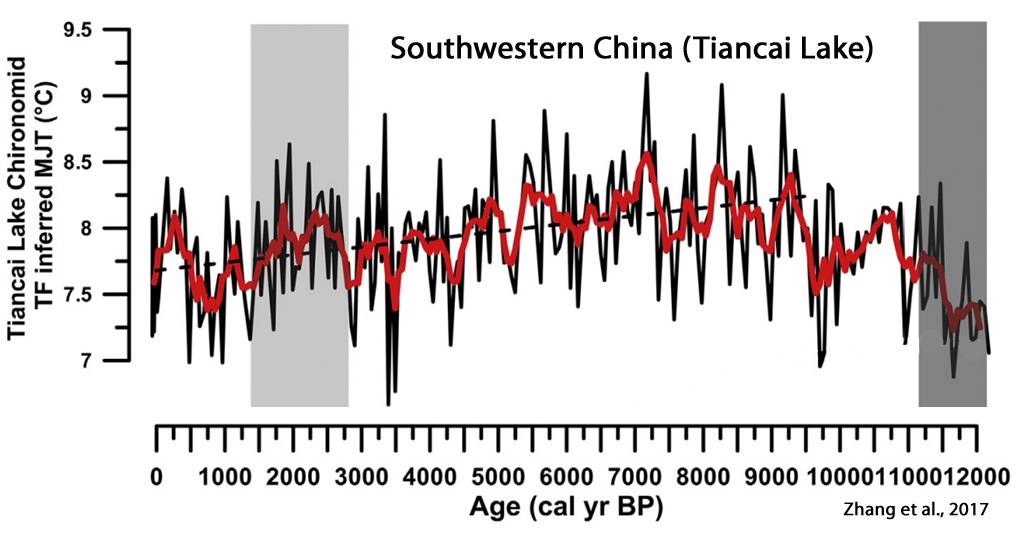 5.   The delayed response of regional climate to orbital forcing in the early Holocene may be linked to the temperature variability predominantly being driven by centennial scale solar irradiance fluctuations during this period (Fleitmann et al., 2003; Wang et al., 2005). In addition, the existence of remnant ice sheets in the Northern Hemisphere high latitudes in the early Holocene could have also caused the delay of the attainment of a temperature optimum in southwestern China in response to the solar insolation maximum (Xiao et al., 2009; Wen et al., 2010).

6.   The chironomid record from Tiancai Lake shows a 2.2° C summer warming just after ~2500 cal yr BP and the alkenone-based record from Qinghai Lake also shows a warming at this time interval. The warm period persisted for nearly 1000 years until ~1600 cal yr BP. This temporal coherence suggests a regional climate response and indicates that secondary forcing mechanisms can modify the insolation driven system. This warm period is possibly related to the rapid and overall rise of solar activity (Steinhilber et al., 2012).

7.   [T]hese observations may reflect the variability of the Indian Summer Monsoon as a result of the enhanced solar activity influence. It is in line with evidence suggested in a few studies (Lihua et al., 2007; Thamban et al., 2007; Hiremath et al., 2015) from the Indian Summer Monsoon (e.g. Bay of Bengal) influenced area. In summary, the solar irradiance fluctuation is inferred to affect the summer air temperatures at the QTP either by directly raising lake water temperatures at the high altitude under a weakened summer monsoon condition or alternatively, it could also result in variations of the Indian Summer Monsoon activity at decadal to centennial scale in the late Holocene.

8.   In general, the pattern of millennial summer temperature changes is driven by the summer insolation-forced intensity of Asian summer monsoons during the Holocene. Variations from this general pattern were evident during the late Holocene and may be related to a shift in solar activity (e.g. from ~2500 to 1600 cal yr BP). 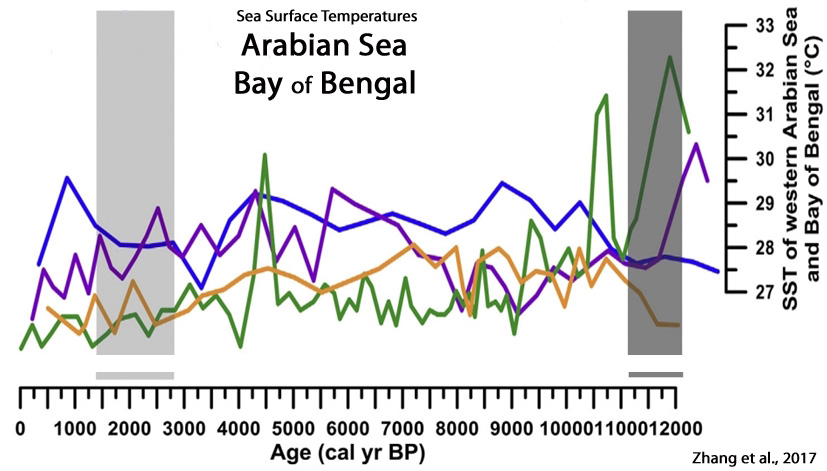 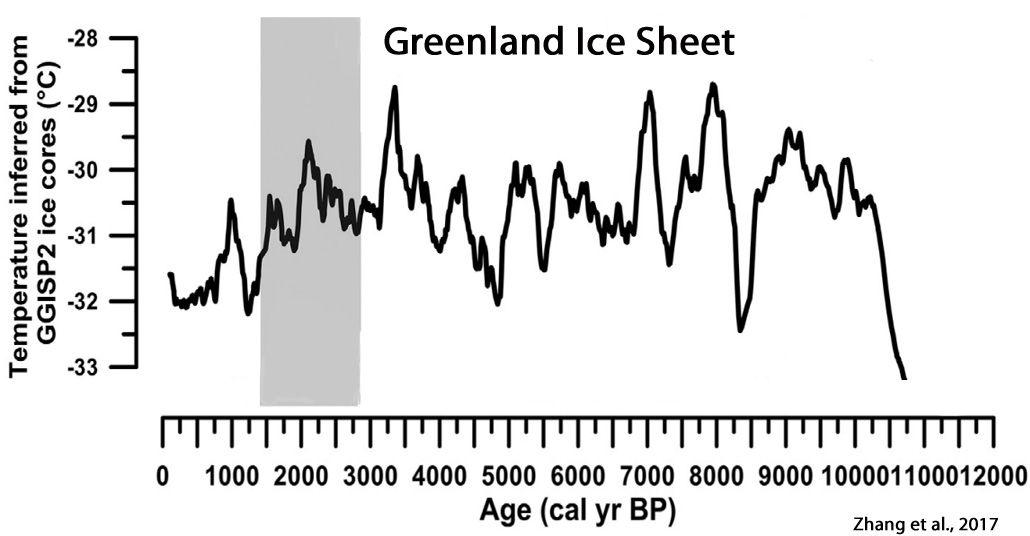