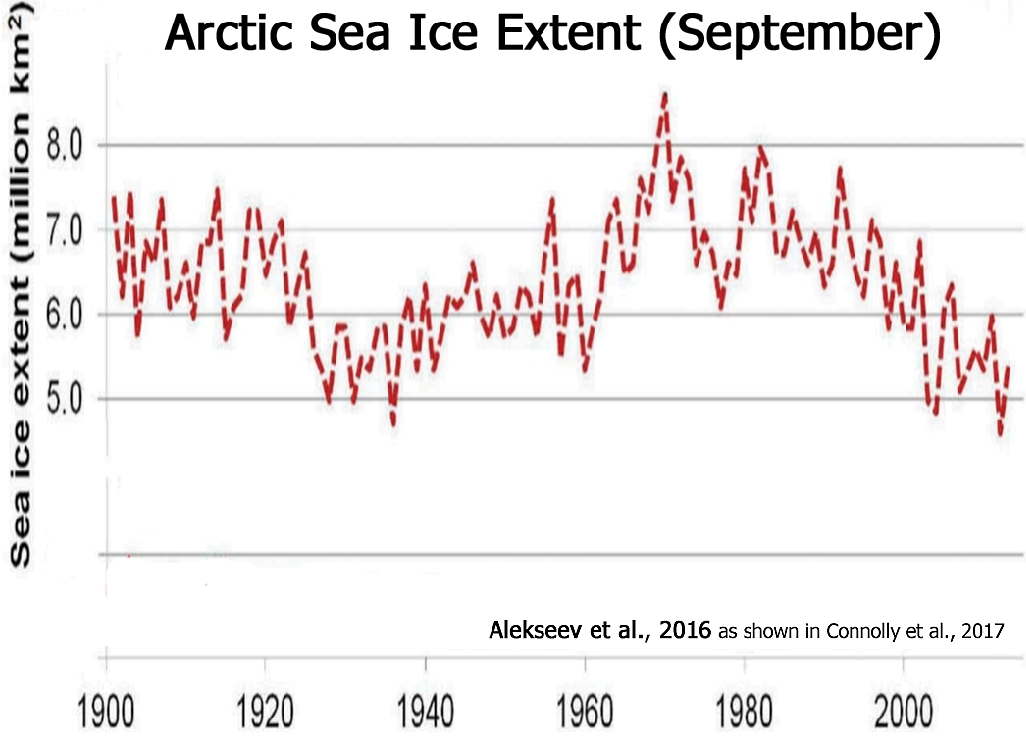 Anthropogenic CO2 emissions have risen linearly since the mid-1940s.

According to climate models, anthropogenic CO2 emissions drive trends in polar sea ice.   The sea ice extent in both the Northern and Southern Hemispheres should therefore gradually decline (linearly) as human emissions rise.

However, neither the Arctic nor Antarctic sea ice trends appear to be cooperating with these modeled expectations.

In newly published papers, scientists have reported that Arctic sea ice extent grew during the decades from the 1940s to the 1980s before declining after the 1980s.   The Arctic sea ice trend has thus undergone an oscillation rather than a linear recession, contradicting the models.

Furthermore, the instrumental record indicates that  Arctic temperatures have stopped rising since about 2005.

On the other side of the planet, the sea ice surrounding Antarctica has been growing since the 1970s, or for nearly 40 years now.  This sea ice expansion coincides with an overall Southern Ocean cooling trend of about -0.3°C per decade since 1979.

Again, the climate models that stipulate changes in CO2 concentrations are what drive polar sea ice trends have been contradicted by observational evidence.  As Connolly et al. (2017) conclude:

“[C]urrent climate models are still quite poor at modelling past sea ice trends.”

Climate models may also be quite poor at modelling current sea ice trends.

According to this new dataset, the recent period of Arctic sea ice retreat since the 1970s followed a period of sea ice growth after the mid 1940s, which in turn followed a period of sea ice retreat after the 1910s. Our reconstructions agree with previous studies that have noted a general decrease in Arctic sea ice extent (for all four seasons) since the start of the satellite era (1979). However, the timing of the start of the satellite era is unfortunate in that it coincided with the end of several decades during which Arctic sea ice extent was generally increasing. This late-1970s reversal in sea ice trends was not captured by the hindcasts of the recent CMIP5 climate models used for the latest IPCC reports, which suggests that current climate models are still quite poor at modelling past sea ice trends. Nor is it described in previous Arctic sea ice reconstructions such as the Walsh dataset or the widely used HadISST sea ice dataset, although some recent studies have noted similar reversals, e.g. Pirón and Pasalodos (2016) and Alekseev et al. (2016). 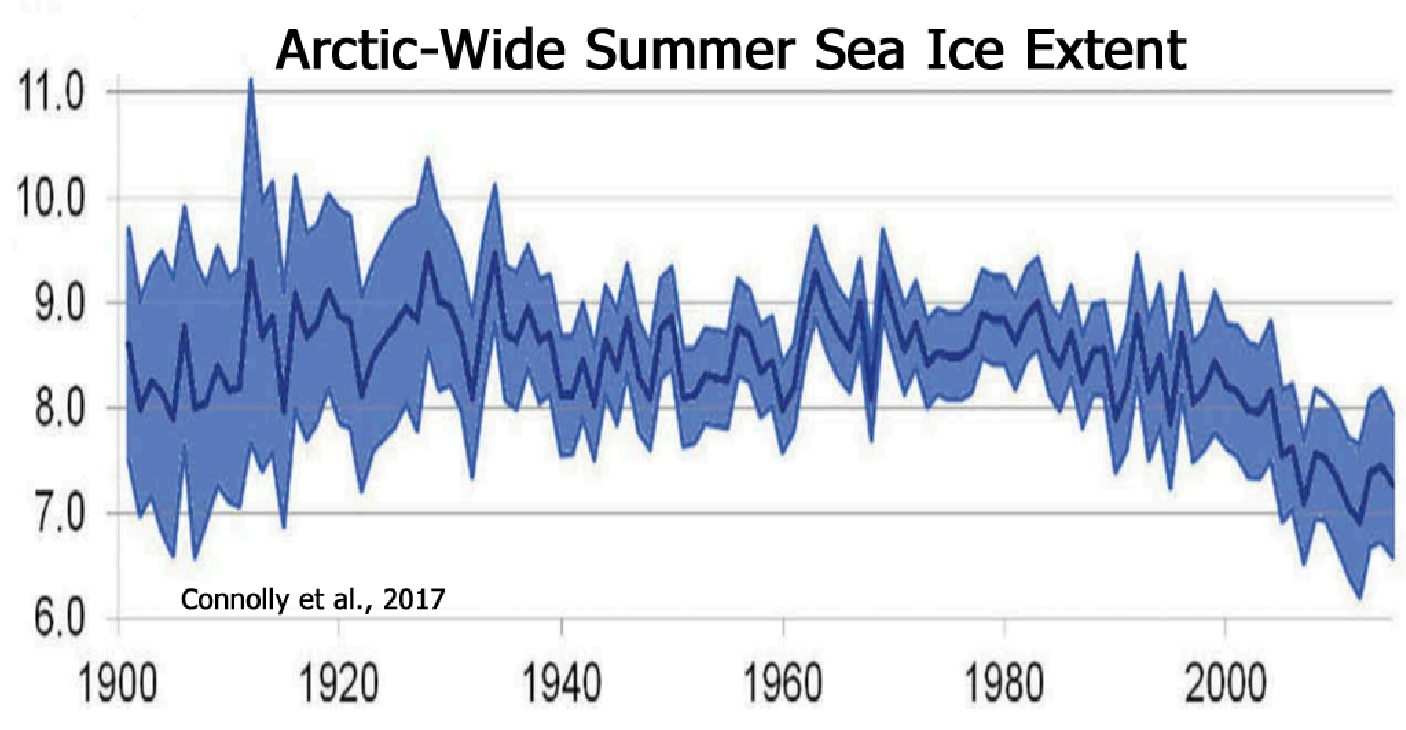 An Arctic Sea Ice Oscillation Since The 1940s 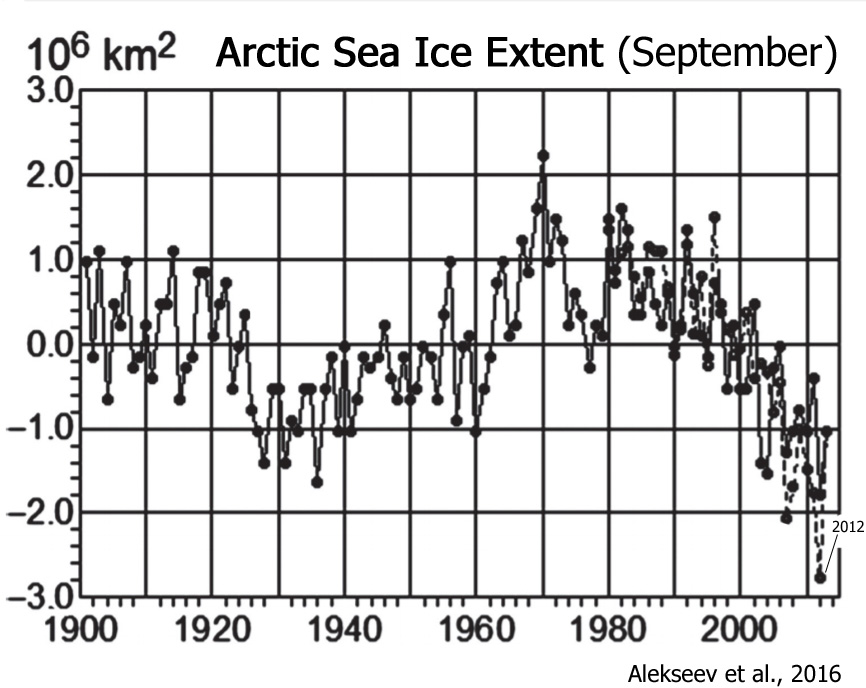 No Net Arctic Warming Trend Since 2005 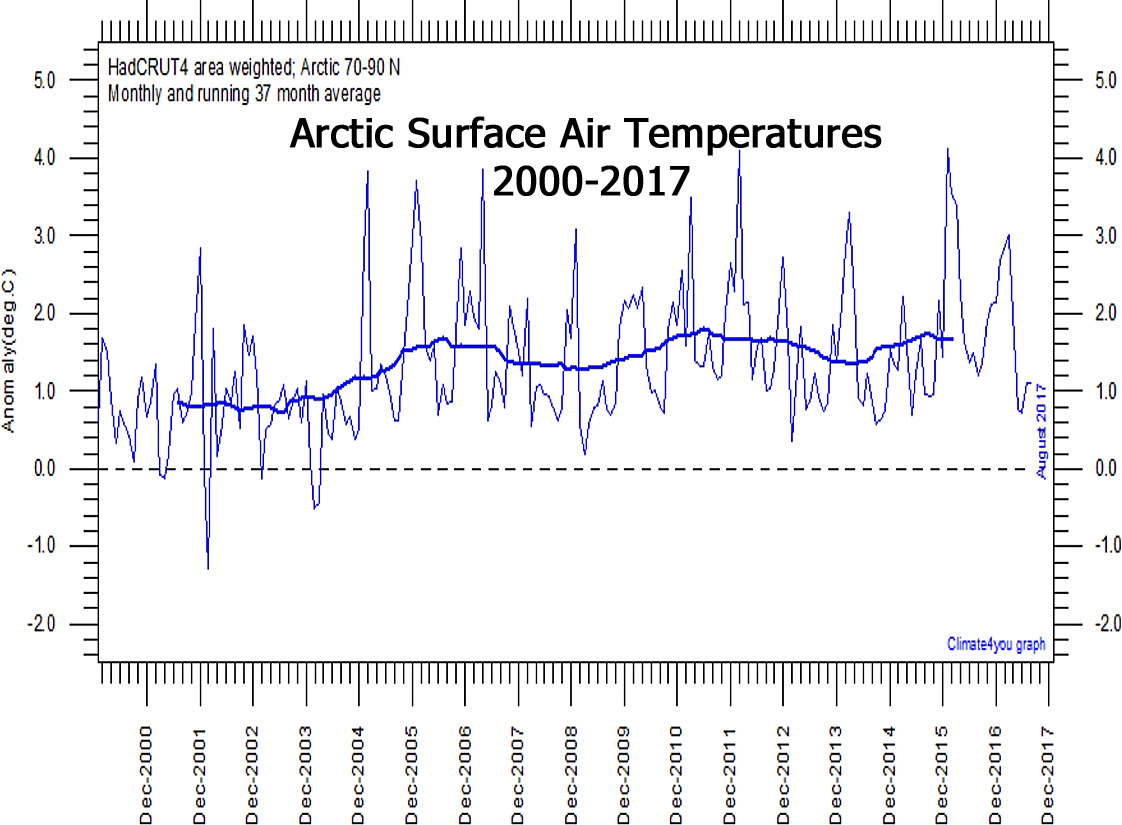 The Antarctic sea ice extent has been slowly increasing contrary to expected trends due to global warming and results from coupled climate models. After a record high extent in 2012 the extent was even higher in 2014 when the magnitude exceeded 20 × 106 km2 for the first time during the satellite era. … [T]he trend in sea ice cover is strongly influenced by the trend in surface temperature [cooling]. 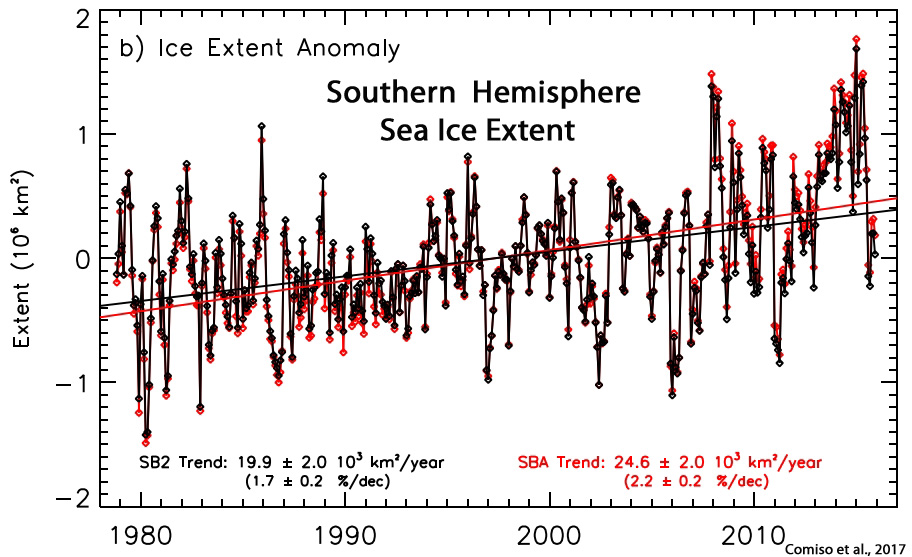 Compelling evidence indicates that the large increase in the SH [Southern Hemisphere] sea ice, recorded over recent years, arises from the impact of climate modes and their long–term trends. The examination of variability ranging from seasonal to interdecadal scales, and of trends within the climate patterns and total Antarctic sea ice concentration (SIC) for the 32–yr period (1982–2013) are the key focuses of this paper. Our results indicate that a progressive cooling affected the year–to–year climate of the sub–Antarctic since 1990s.

Antarctic sea ice extent has increased by approximately 1.5 % per decade since satellite observations began in 1979 (Parkinson and Cavalieri, 2012; Turner et al., 2015). The small overall increase masks higher-magnitude regional and seasonal trends around the continent, most notably an increase of 3.9 % per decade in the Ross Sea peaking during spring, and a decrease of −3.4 % per decade in the Amundsen and Bellingshausen seas peaking during autumn (Turner et al., 2015). By contrast, models in the Coupled Model Intercomparison Project Phase 5 (CMIP5) exhibit decreasing sea ice trends in all months (Turner et al., 2013a). The reasons for the disparity between observed and modelled trends are not yet well understood (Bindoff et al., 2013; Hobbs et al., 2016).

In stark contrast to the sharp decline in Arctic sea ice, there has been a steady increase in ice extent around Antarctica during the last three decades, especially in the Weddell and Ross seas. In general, climate models do not to capture this trend … This comparison shows that the summer sea ice edge was between 1.0 and 1.7° further north in the Weddell Sea during this period but that ice conditions were surprisingly comparable to the present day [during 1897-1917] in other sectors.

17 responses to “New Paper: Defying Models, There Has Been No Long-Term Linear Decline In Arctic Sea Ice”