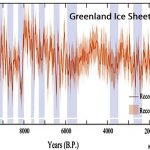 Share this… Facebook TwitterGreenland Cooling Since 2005 Arctic Region Cooler Now Than Most Of The Last 10,000 Years It’s official.  According to a new paper published in the journal Scientific Reports, Greenland has been cooling slightly since 2005. This trend development may be a harbinger of what may be in store for the coming years.  Shifts in North […]