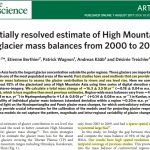 Share this…FacebookTwitterGlacier Retreat Has Been Slowing During 2000-2016 A new satellite-based estimate of glacier mass change for High Mountain Asia (HMA), the world’s third largest glacier conglomeration after Antarctica and Greenland, reveals a relatively modest retreat rate for the first 17 years of the 21st century. The results from Brun et al. (2017) indicate that HMA glaciers are […]