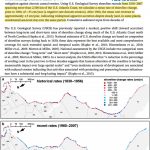 Share this…FacebookTwitterDespite reports of relatively high regional rates of sea level rise, the Atlantic Coast of the United States has actually been expanding in recent decades after rapidly shrinking prior to the 1960s. A 2001 Salon magazine “terror in the skies” alarmism article featured a Dr. James Hansen late-1980s prediction that New York City’s West […]