It’s a good thing Germany still has a lot of conventional power supply from coal and nuclear on line. Otherwise the entire country would have blacked out this morning during the partial eclipse of the sun. Conventional fuel saved the day.

As the following diagram depicts, there was almost no wind output from Germany’s 40 or so gigawatts of installed wind capacity over the last 36 hours. The country’s wind turbines called it an early weekend.

Wind energy (blue) has virtually disappeared over the last 36 hours. Solar disappears every night, and often during the day in the wintertime. Often less than 1% of Germany’s electrical demand gets supplied by wind and sun. Source: agora.

German wind and solar power disappeared this morning and over the last 36 hours, leaving fossil and nuclear power to step in to the rescue. The following chart of Germany’s energy supply and demand shows how wind has gone AWOL already 11 times since January 1: 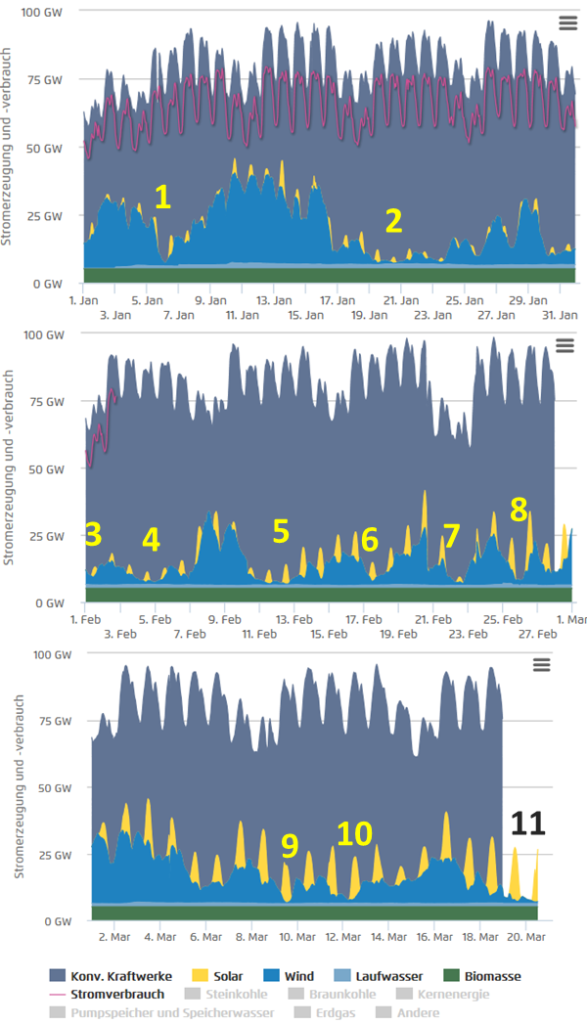 Since January 1, Wind power failed to show up some 11 times. On average about 85% of the installed capacity doesn’t show up to begin with. Charts cropped from agora.

The point here is that it doesn’t matter how much wind and solar capacity gets installed. Once the wind stops blowing and the sun does’t shine, which is often enough, you get no power – period. Imagine if a doctor sold you an artificial heart that could run for 100 years, yet the heart pumped only sporadically, sometimes at only a beat or two a minute over for hours or even days. So it is with wind and solar energy. Our society needs a steady and constant supply; it can’t afford to constatntly stall and sputter, otherwise it collapses and dies.

Today’s partial eclipse of the sun did not strain Germany’s power grid as much as feared. Fog and cloudy weather over northern Germany helped to dampen the feared fluctuation. Sunny day projections of 12,000 megawatts of power going offline in just an hour followed by 19,000 megawatts surging online in an hour warned that the grid could be destabilized. Here’s what the sunny-day scenario solar feed-in looked like:

What actually happened was nowhere near as bad as feared:

As the sun’s energy disappeared, conventional fuels saved the day.

What follows is a photo I took outside near peak time of the partial eclipse in northwest Germany, where it was overcast:

10:45 this morning. Looks like a typical dreary day in north Germany.

In general, power companies and grid operators had months to prepare for the eclipse. Lapses and wild fluctuations in wind and sun energy are common (see above) and so today’s eclipse was manageable though with considerable effort. Power companies asked large consumers such as aluminum smelters, cement plants and glass manufacturers to ramp down their production before the event. That would not have been necessary with conventional power.

24 responses to “German Wind Power Goes Completely AWOL For The 11th Time This Year…Fossils, Nuclear Again To The Rescue!”