At the print edition of Swiss news weekly “Weltwoche”, science journalist Markus Schär writes that not only has the global temperature trend suspiciously been tampered with, but so have the datasets of the Swiss Meteorological Service: 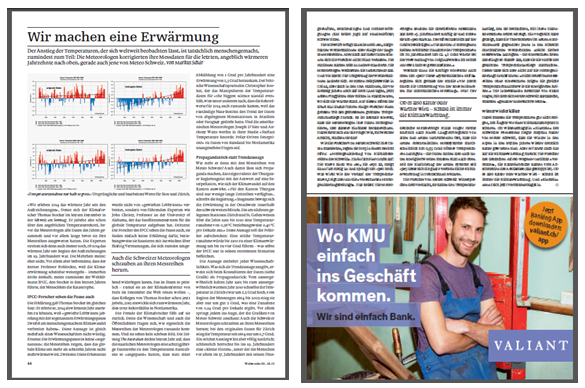 To illustrate Weltwoche shows two datasets in its article from two different locations in Switzerland: 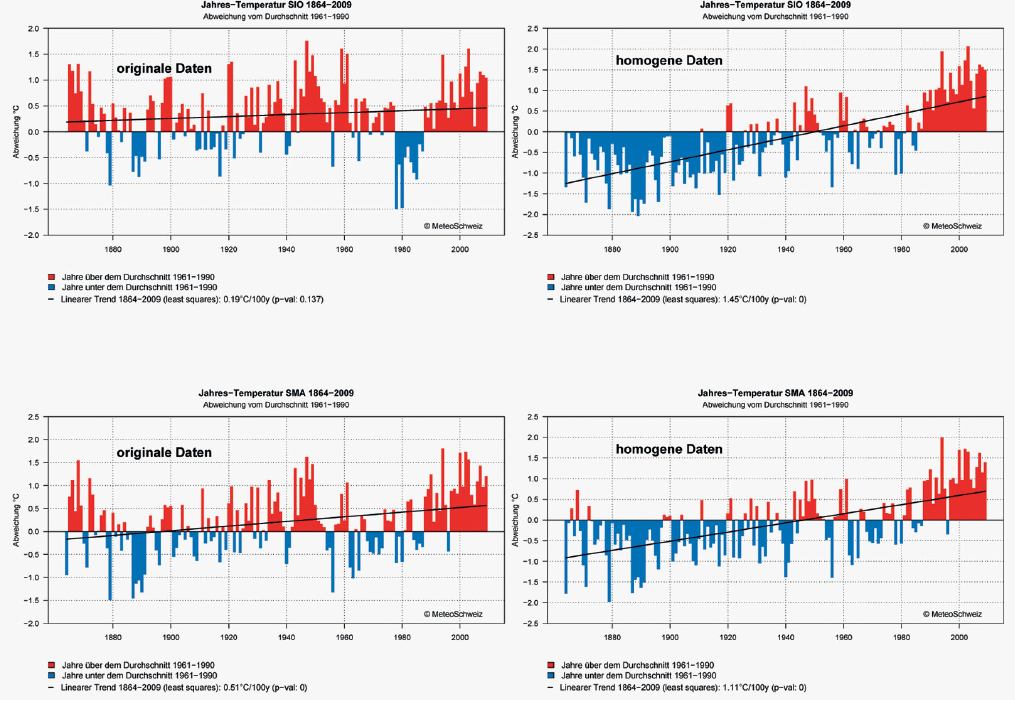 The chart above shows the mean annual temperatures and trends for Sion and Zurich before (left) and after “adjustment” (right). The “adjustments” resulted in a doubling of the temperature trend.

At the start of the article Schär characterizes Thomas Stocker’s claim that the “so-called” 18-year global temperature pause is misleading information spread by “lobbyists” as scientifically invalid, and does so for three reasons: 1) It’s not “so-called” because datasets show there’s been no warming in over 18 years, 2) the pause is acknowledged by leading experts, and 3) IPCC experts have already acknowledged it, and have even come up with “over 50 explanations” to explain it.

Schär then focusses on the reports of temperature adjustments at various locations around the world that have led to a depiction of more rapidly warming global temperatures:

The Australian last year uncovered that state meteorologists adjusted an 80-year temperature series of Australia so that a cooling of 1°C per century was changed to a warming of 2.3°C.”

British science journalist Christopher Booker, who called the manipulation of temperature data ‘the biggest science scandal ever’, showed how among other things that the record value for 2014 came about because the responsible NASA institute had flipped the data trend for rural measurement stations in Brazil or Paraguay.”

According to Schär at Weltwoche, also Swiss temperature data have been adjusted to show stronger warming, calling the work a “propaganda trick, and not a valid trend“.

Schär calls into question the basis used for justifying the upwards adjustment, especially with respect to the fact that stations today are more urbanized and under influence of the urban heat island effect. He writes of the Swiss data:

It is correct that meteorologists homogenize their data, i.e. filter out external influences. But here the question is: How and with what intention are they doing this? […]

The meteorologist significantly lowered the data from the 19th century and strongly raised those of around 1980.”

The result, Schär writes; was a doubling of the temnperature increase rate. Schär also reports on how German meteorologist Klaus Hager earlier determined that the newer electronic measurement instruduced since the 1980s showed “on average 0.93°C higher temperatures.”

So why the upward adjustments when we have all the instrumentation and siting issues?

Schär writes that the Swiss meteorologists have rejected Hager’s claim that the new electronic instrumentation is delivering warmer temperatures, insisting that “the thermometers in the new automatic network are showing ‘slightly lower temperatures’ than those in the ‘poorly ventilated’ Stevenson screens.” Schär continues:

The corrections, however, appear so massive that they represent half of the entire temperature increase.”

Despite the data fudging by Swiss meteorologists (and those worldwide), no one is able to hide the fact that winters in Switzerland and in Central Europe have gotten colder over the past 20 years, defying predictions of warming made earlier by climatologists.

But that’s no problem for the climatologists, Schär writes.

Temperatures no longer have to rise in order to spread the fear of climate catastrophe. In the science magazine ‘Einstein’ on Swiss television, Stephan Bader of the Swiss Meteorological Service showed that winters in the Alps were getting cooler over the past years: But he also added that it was due to climate warming: Scientists at the Alfred Wegener Institute ‘suspect’ the cold snaps came from the melting of Arctic ice (which has stopped).”

12 responses to “Swiss Weekly Calls Temperature Rise A “Propaganda Trick” (Not A Trend) …”We Are Making A Warming”!”