UPDATE: DUE TO ELEVATED INTEREST, THIS ARTICLE WILL BE A STICKY POST FOR ANOTHER DAY OR TWO.

Here in the U.S. I have documented manipulations similar to those in Switzerland and other locations worldwide that NTZ wrote about yesterday.

We need only compare the data. They cooked their own books (see numbers below). 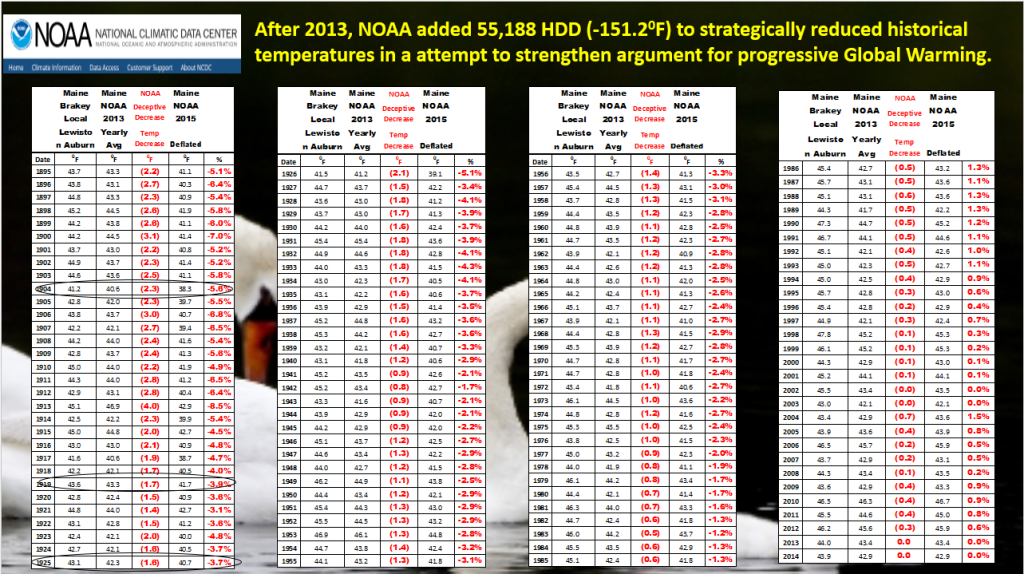 The last four months have been some of the coldest you might ever recall in our lifetime. So far 2015 is the fourth coldest in Maine’s history over the last 120 years. Data from 2013 confirm that so far – from January 1 to April 29 – 2015 has required 4249 heating degree days.

But when I recently looked at NOAA’s revised 2015 data, these last four months now would not even put us in the top twenty of coldest months. The federal government went into the historical data and lowered those earlier years – and other years in the earlier decades – so that they can keep spending $27 billion a year on pushing global warming.

They assumed no one would archive temperature data. But I did. My research indicated they used the same algorithm across the United States at the same time. Fortunately I had archived their data from 2013 for Maine and recently compared it to their 2015 data (see above table).

As an engineering physicist and heat transfer specialist, I have worked with heating and cooling degree days for forty years. It is alarming when one discovers multi-million dollar websites have been corrupted with bogus data because the facts do not match up with agendas.

It tremendously harms the industry you and I both work in. Worse, it harms the public. If the public knew the climate data facts indicated it was not getting warmer locally, and that it might actually be getting cooler, it would have all the more reason to insulate and become more energy-efficient in their homes.

I have put together a Maine history of climate temperatures in a narrated PowerPoint Presentation placed on YouTube titled, Black Swan Climate Theory.

Below is a brief sampling of my findings:

2015 so far among coldest on record

A BLACK SWAN event is forming in 2015 (following chart): 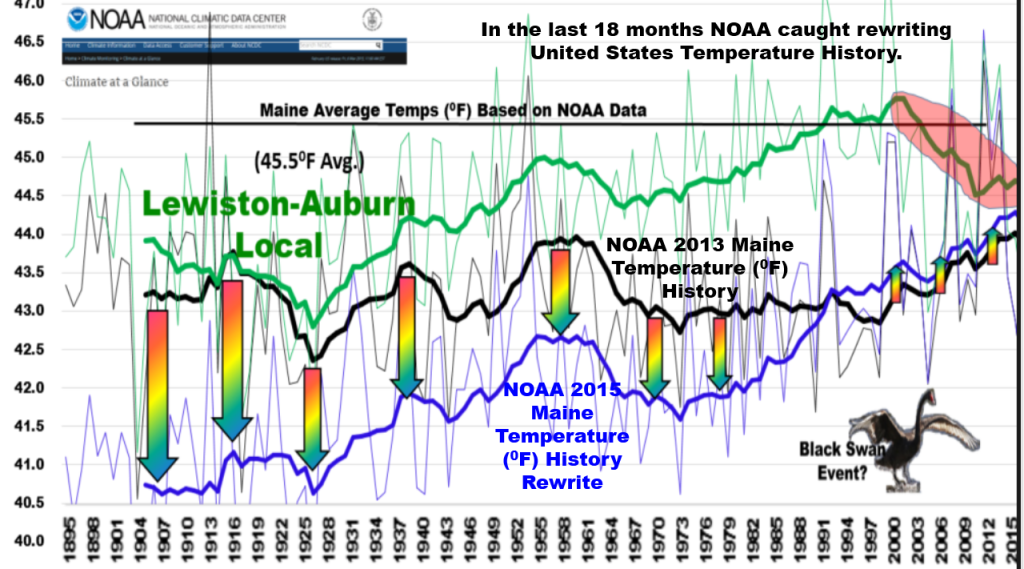 Based on the first four months of 2015, there is an excellent chance 2015 Maine temperature might average, on an annual basis, well under 43.0°F. Not only have Maine temperatures been on a decline since 1998, we are now seeing temperatures reminiscent of the bitter turn of the early 1900s.

It appears NOAA panicked and did a massive rewrite of Maine temperature history (they used the same algorithm for U.S. in general). The new official temperatures from Maine between 1895 and present were LOWERED by an accumulated 151.2°F between 1895 and 2012.

In my opinion, this is out-and-out fraud. Why did they corrupt national climate data? Global warming is a $27 billion business on an annual basis in the U.S alone.

Now NOAA data revised in 2015 indicate that 1904, 1919 and 1925 in Maine were much colder than anything we experience today. (See the scorecard above comparing the NOAA data that are 18 months apart). Note how for 1913 the NOAA lowered the annual temperature a whole 4°F!

For the balance of the years, as they get closer to the present, the NOAA tweaks less and less. They have corrupted Maine climate data between 1895 and present by a whopping accumulated 151.2°F.

A multi-million dollar website has been corrupted. I can no longer rely on the tax-payer funded NOAA for clean, unfiltered, climate data for my ongoing research.

I can no longer trust the climate data and energy information ultimately drawn from the U.S. government. Locally, I now have to determine if they got their data from NOAA.

This makes research a lot tougher.