Frank at his German-language blog here makes a good point on the potential and feasibility of renewable electricity storage using lithium batteries, which is supposed to be key to successfully using wind and solar energy. 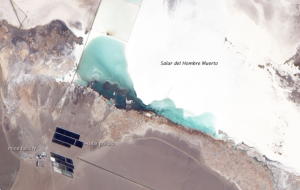 Satellite images of the Salar del Hombre Muerto, Argentina (left), and Uyuni, Bolivia (right), salt flats that are rich in lithium. The lithium-rich brine is concentrated by pumping it into solar evaporation ponds (visible in the left image). Photo: NASA (public domain).

Often proponents of renewable energies such as wind and sun like to claim that the problem can be solved simply by using the common lithium battery packs, similar to those that for example power your electric drill or notebook. They insist that today it’s no problem to install largescale battery storage units for powering homes and businesses whenever wind and solar energy stall, as they often do.

But is it really possible?

Frank asks how many battery powerpacks would be needed to bridge Germany’s entire power supply if the country indeed were running 100% on renewable energy.

He found that Germany needs about 11.5 TWh (11,500 gigawatt-hours) of electricty each week. Would the current worldwide lithium battery production capacity be able to cover this?

According to Tesla here, total battery capacity production in 2013 was only 34 gigawatt-hours. Rounding the figure up to 35 giganwatt-hours, you would need to increase the global annual production of lithium-ion batteries by some 300-fold just to cover Germany’s power supply for a single week. Or in other words, the current global annual production capacity would be enough to cover Germany’s power demand for a whole 30 minutes!

Globally, an entire year’s production of lithium batteries would supply the global demand for about a single minute. And this is without taking losses from factors such as efficiency and age into account.

Of course today’s global production of storage batteries is higher than it was in 2013, and their efficiencies are probably higher as well. But the difference amounts only to a few extra seconds or minutes.

Powering the entire globe for any significant time with batteries would require boosting current production capacity by far over a thousand-fold. Mining the lithium needed to produce such a massive amount would pose major challenges. Time to sober up, people.

Naturally there are applications where using wind and sun makes perfectly good sense. But trying to power the entire global economy with them is lunacy. Why dig up the planet to extract lithium for inefficient, indirect energy production when you can just dig coal and get great quantities of energy quickly and directly?