Glacier Retreat Has Been 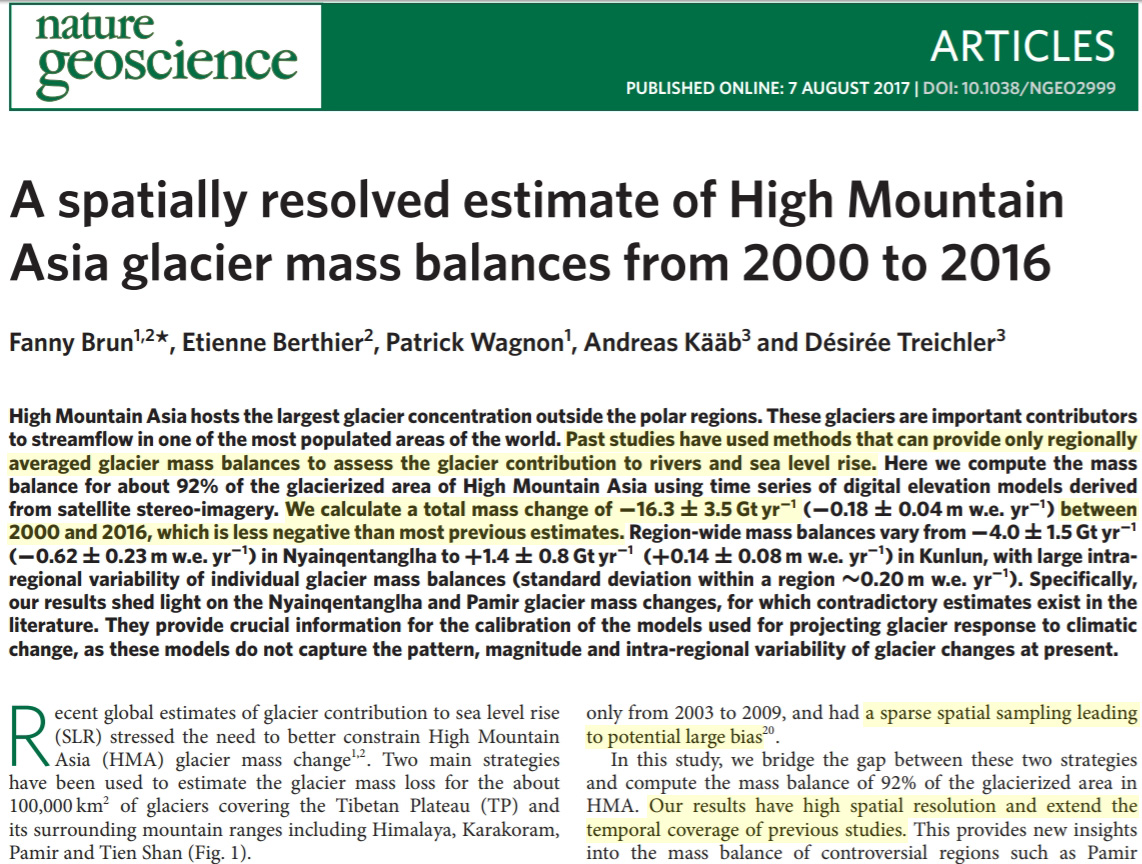 The results from Brun et al. (2017) indicate that HMA glaciers are nearly in balance for 2000-2016, contributing the equivalent of just 0.046 millimeters per year to sea level rise during this period.  This is a glacier-melt contribution rate of less than half a centimeter per century, which is “much smaller” and “in marked disagreement” with other recent estimations.

In this study, for example, glaciers in the Kunlun and Karakoram regions of HMA have been observed to be in balance or even gaining mass.  The model-based studies indicate significant mass losses are occurring in these regions.

The high estimates of HMA glacier melt and sea level rise contribution are preferred (and thus “widely used in the literature”) by those advancing the position that modern glacier melt rates are unusual or unprecedented.  This study makes a strong case that past and present high glacier-melt values in this region are unsupported by comprehensive analyses from satellite observations.

•“These discrepancies can be explained by the lack of direct measurements to constrain both the interpolation method of Cogley, 2009 and the model tuning and/or the high temporal smoothness of atmospheric models of Marzeion et al., 2015.”

•“In particular, these estimates [Cogley, 2009 and Marzeion et al., 2015] attribute mass losses to Karakoram and Kunlun, two regions with a large glacierized area where we find only little mass loss or even mass gain.”

In a highly-regarded mass balance analysis (to date, nearly 550 citations) published in the journal Nature, Jacob et al. (2012) record a stark trend reversal and rapid deceleration of glacier retreat in the 21st century for the globe’s glaciers and ice caps (excluding the Greenland and Antarctica ice sheets).

A major reason why the glacier loss estimates have been shrinking in recent years is the effectively in-balance estimates for HMA glaciers, which “show a mass loss of only 4 ± 20 Gt yr−1 for 2003–2010, compared with 47–55 Gt yr−1 in previously published estimates“.

Considering aggregate estimates for non-polar glacier mass loss were 2 or 3 times greater  for the 1990s to early 2000s than in the more recent years, it would appear the trend reversal in glacier mass losses is more widespread than a few areas in High Mountain Asia.