During the 1930s, when the atmospheric CO2 concentration was about 100 ppm lower than today (310 ppm vs. 410 ppm), United States heat waves were just as if not more common than recent decades.

Recently there has been much ado about heat waves and the hottest-ever-recorded-temperatures making their rounds in Northern Hemisphere summer.

Yet scientists have determined that heat waves are largely driven by natural variability, not anthropogenic CO2 emissions.

Was there a basis for anticipating

“The 2010 summer heat wave in western Russia was extraordinary, with the region experiencing the warmest July since at least 1880 and numerous locations setting all‐time maximum temperature records. This study explores whether early warning could have been provided through knowledge of natural and human‐caused climate forcings.

“The July surface temperatures for the region impacted by the 2010 Russian heat wave shows no significant warming trend over the prior 130‐year period from 1880 to 2009. A linear trend calculation yields a total temperature change over the 130 years of −0.1oC.”

“Model simulations and observational data are used to determine the impact of observed sea surface temperatures (SSTs), sea ice conditions and greenhouse gas concentrations. Analysis of forced model simulations indicates that neither human influences nor other slowly evolving ocean boundary conditions contributed substantially to the magnitude of this heat wave. They also provide evidence that such an intense event could be produced through natural variability alone. Analysis of observations indicate that this heat wave was mainly due to internal atmospheric dynamical processes that produced and maintained a strong and long‐lived blocking event, and that similar atmospheric patterns have occurred with prior heat waves in this region. We conclude that the intense 2010 Russian heat wave was mainly due to natural internal atmospheric variability. Slowly varying boundary conditions that could have provided predictability and the potential for early warning did not appear to play an appreciable role in this event.”

Attribution of the June–July 2013 Heat

Wave in the Southwestern United States

“A severe heat wave occurred in the southwestern United States (US) during June and July 2013. To investigate the effects of natural variability and anthropogenic climate change on this event, we generated large ensemble simulations of possible weather using the MIROC5A climate model forced by “historical external forcing agents, sea surface temperature (SST) observations and sea ice (SIC) observations” both with and without human influence. It was suggested that both the anthropogenic warming and an atmospheric circulation regime related to the natural variability of SST and SIC made the heat wave event more likely. On the other hand, no significant human influence was found in atmospheric circulation patterns. These results were robust for two different estimates of anthropogenic signals on SST and SIC.”

These conclusions are consistent with the observation that heat wave events have not been increasing in tandem with the dramatic rise in CO2 emissions over the last century, further rendering the link between human activity and heat waves dubious.

In the United States, for example, where the most extensive long-term instrumental temperature data reside, there has been no significant trends in heat wave frequency since the 1880s, and there has been an overall decline in the number of decadal-scale heat waves since the 1930s.

Monitoring and understanding changes in 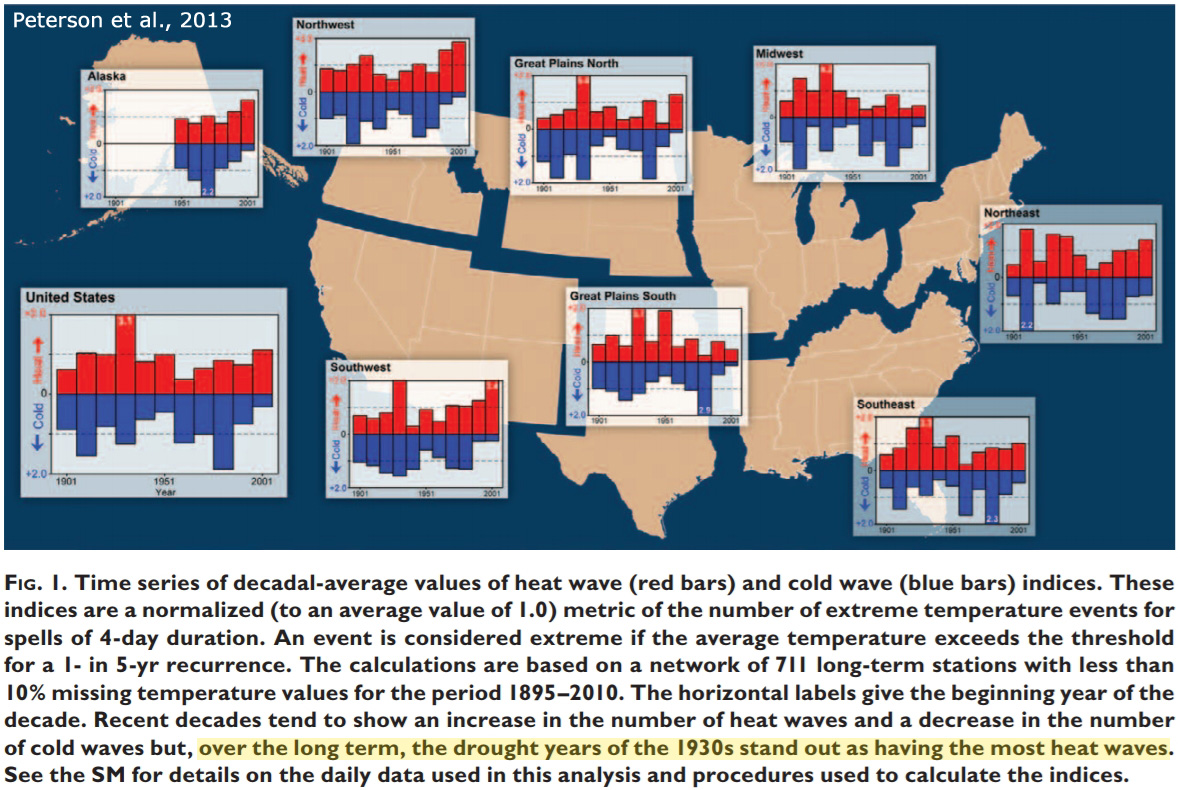 Impacts of the Atlantic Multidecadal Variability on

“Radiative forcing variations, such as those driven by anthropogenic emissions, can also modulate the occurrence of heat waves (e.g., Hansen et al. 2012). Previous studies, based on Coupled Global Climate Models (CGCMs) integrated under different anthropogenic forcing scenarios, concluded that over the US, the number of heat waves would increase during the 21st century (Meehl and Tebaldi 2004, Diffenbough et al. 2005, Lau and Nath 2012). However, this increasing trend may be modulated by the impacts on land of low frequency sea surface temperature (SST) variability (e.g., Schubert et al. 2016, Seager and Ting 2017), such as that associated with the internally-driven component of the Pacific Decadal Oscillation (PDO; Newman et al. 2016) or the Atlantic Multidecadal Variability (AMV; Schlesinger and Ramankutty 1994, Knight et al. 2005). These low frequency SST variations may explain why there has not been any long-term trend of heat waves detected over the US during the 20th century, despite the increase of radiative forcing (Kunkel et al. 1999, Easterling et al. 2000).”

“The trends based on the NOAA meteorological data show that changes in the length of the heat wave events equal or beyond 3 days of duration are not significant. The mean maximum temperature of the heat wave is also close to stable over the 140-year period of study with no significant increase. … Results obtained from the in-depth analysis of the NYT articles, corresponding to the dates of longer lasting heat wave events (i.e., equal or more than 6 days in duration), show that the number of deaths and people affected in New York City significantly declined. … The change in coping strategies mentioned in the newspapers articles and divided before and after the 1960s illustrates how the advent of air conditioning can be most likely contributed to the significant reduction in mortality due to extreme heat. … Also not significant are the trends in extreme precipitation (beyond 1.75 in. and beyond 3.5 in.) with significant inter-annual and interdecadal variability.” 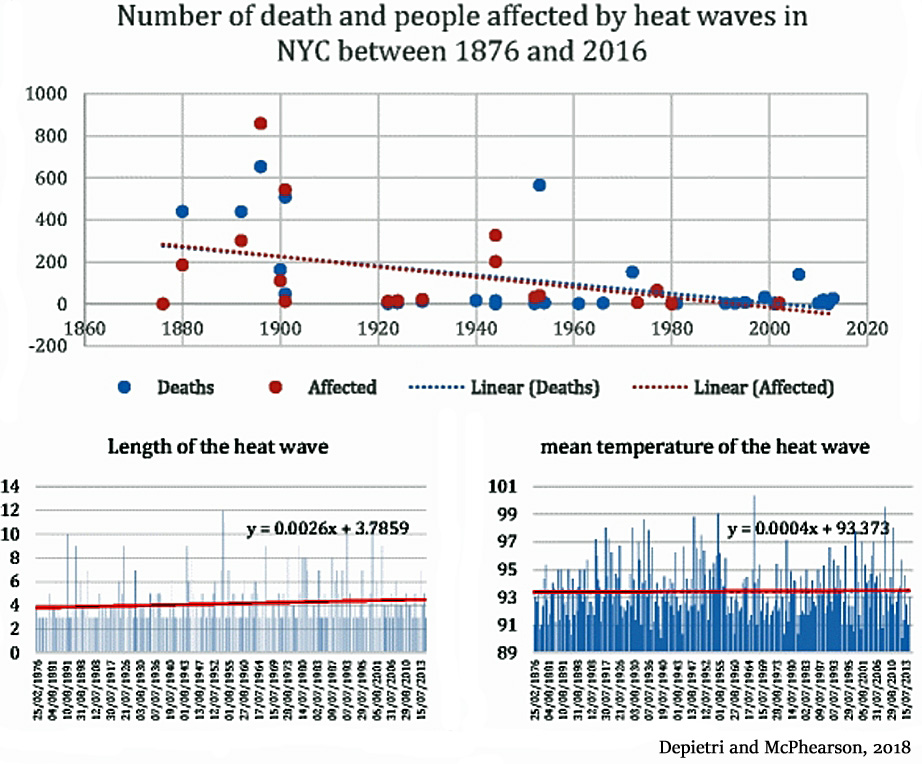