Share this…FacebookTwitterVarious reports are coming out claiming that Russian authorities have reduced the charges against the Arctic Sunrise activists from piracy to hooliganism. Russia’s RT here reports the lesser hooliganism charge carries a maximum sentence of 7 years in prison. ‘The actions of those involved in the criminal case have been  reclassified to the charge […] 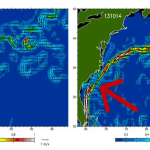 Share this…FacebookTwitterGerman meteorologist Dominik Jung has a commentary today at his wetternet.de site where he looks at the Atlantic Gulf Stream. The commentary is titled: “Is the Gulf Stream Now Losing Its Steam?” Over the last few days Central Europe has been enjoying almost summerlike temperatures as a weather system is drawing warm air from […]