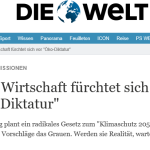 Share this…FacebookTwitterHere’s the latest on plans by some overly overzealous German government leaders to get the country to commit economic suicide through de-carbonization, at least that’s what German industry believes. Online German national daily Die Welt has a piece by Daniel Wetzel titled: German Economy Fears Eco-Dictatorship. Screen shot of Die Welt report In the […]