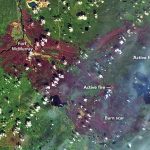 Share this…FacebookTwitterSome alarmists are claiming that the devastating forest fires of Alberta (see NASA photo below) are the result of climate change, for example by the New York Times or the BBC. Credits: NASA Earth Observatory image by Joshua Stevens, using Landsat data from the U.S. Geological Survey “A ritual” Spiegel science journalist Axel Bojanowski […]