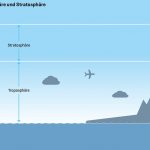 Share this…FacebookTwitterRenowned climate scientist Prof. Mojib Latif used to often appears on television, radio and speeches all over Germany to spread the word of an impending human-made climate catastrophe. Hat-tip Dr. Sebastian Lüning and Prof. Fritz Vahrenholt One of the highlights of Latif’s many appearances was the CO2 “fingerprint” in the atmosphere, which according to […]