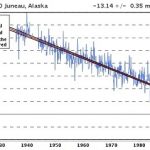 Share this… Facebook TwitterCoastal Land Area Expanding More Land Area Above Sea Level Now Than During 1980s Image from  Mörner, 2017 A year ago, several geologists (Kench et al., 2015) published a paper in the journal Geology that revealed a curious phenomenon occurring along island coasts in the tropical Pacific.  Despite some of the highest […]