More Land Area Above Sea Level Now Than During 1980s 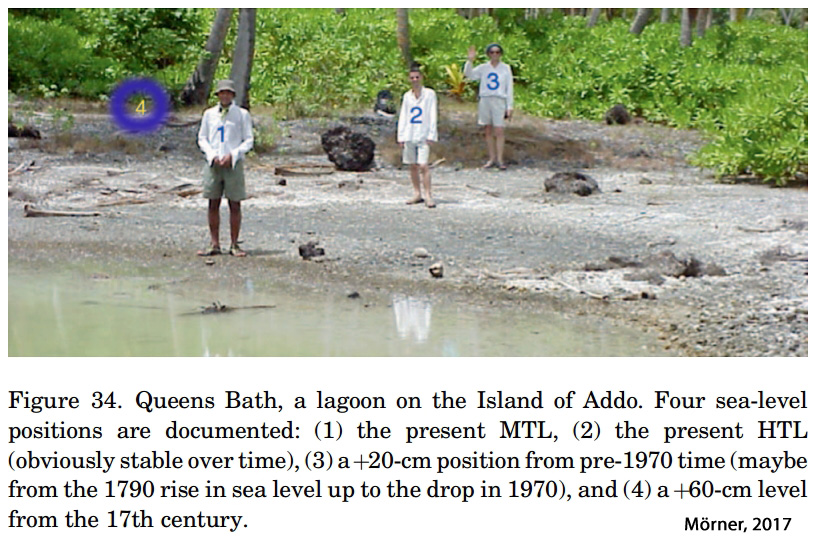 A year ago, several geologists (Kench et al., 2015) published a paper in the journal Geology that revealed a curious phenomenon occurring along island coasts in the tropical Pacific.  Despite some of the highest rates of sea level rise in the world in this region (over 5 mm/yr  on average since the 1950s), the total land area for these islands has not only not shrunk while sea levels were rapidly rising, the coastal land area has expanded — by a net +7.3% — over the last 118 years.

“The geological stability and existence of low-lying atoll nations is threatened by sea-level rise and climate change. Funafuti Atoll, in the tropical Pacific Ocean, has experienced some of the highest rates of sea-level rise (∼5.1 ± 0.7 mm/yr), totaling ∼0.30 ± 0.04 m over the past 60 yr. We analyzed six time slices of shoreline position over the past 118 yr at 29 islands of Funafuti Atoll to determine their physical response to recent sea-level rise. Despite the magnitude of this rise, no islands have been lost, the majority have enlarged, and there has been a 7.3% increase in net island area over the past century (A.D. 1897–2013). “

Then, a few days ago, 6 scientists (Donchyts et al., 2016) published a paper online for the journal Nature confirming that the curious phenomenon in the tropical Pacific — coastal land growth exceeding recent sea level rise — has also been occurring across the world, or on a net global scale, since the mid-1980s.

Interestingly, in the BBC press release for their Nature paper, the Donchyts et al. scientists expressed surprise (“the most surprising thing”)  that coastal land growth has offset the recent sea level rise, and admitted that their findings ran contrary to expectations.

The researchers said Dubai’s coast had been significantly extended, with the creation of new islands to house luxury resorts.

“China has also reconstructed their whole coast from the Yellow Sea all the way down to Hong Kong,” said Dr Baart.

Shoreline Changes Are Not Primarily Determined by Climate

It’s a little puzzling that scientists should be surprised that the Earth’s coasts aren’t shrinking.  After all, relative sea level changes are not the predominant determinative factor affecting the growth or recession of land area.  Coastal erosion and accretion, tectonic uplift and subsidence…are far more influential.

Along the coasts of Alaska, for example, the land surface has been rapidly rising (uplift) for many decades.  Consequently, relative sea levels are falling in this region at a rate of -5 to -10 mm/yr (-2 to -4 inches per decade) according to NOAA tide gauges.

Along the U.S. Gulf Coast, on the other hand, the land surface has been on a long-term sinking (subsidence) trend.  Consequently, relative sea levels are rising at rates of +5 to +10 mm/yr (+2 to +4 inches per decade) according to NOAA tide gauges.

Obviously, these regional sea level trends are only very minimally — if at all —  connected to climate-related sea level changes — or, for that matter, anthropogenic CO2 emissions.

“We show that Grande Glorieuse Island has increased in area by 7.5 ha between 1989 and 2003, predominantly as a result of shoreline accretion [growth]: accretion occurred over 47% of shoreline length, whereas 26% was stable and 28% was eroded. Topographic transects and field observations show that the accretion is due to sediment transfer from the reef outer slopes to the reef flat and then to the beach. This accretion occurred in a context of sea level rise: sea level has risen by about 6 cm in the last twenty years and the island height is probably stable or very slowly subsiding. This island expansion during a period of rising sea level demonstrates that sea level rise is not the primary factor controlling the shoreline changes. This paper highlights the key role of non-climate factors in changes in island area, especially sediment availability and transport.”

Dr. Nils-Axel Mörner, a renowned sea-level expert who has authored over 200 peer-reviewed scientific publications during his career, has recently confirmed there has been a lack of climate-related sea level rise in areas of the world where disastrous climate-related sea level rise has been assumed to already be occurring: the Maldives and along the coasts of Bangladesh.   Severe coastal erosion can explain the relative sea level changes in these regions.  In fact, Mörner reports that the Indian Ocean as a whole has been “virtually stable over the last 40-50 years.”

“Coastal erosion is caused by many different processes like changes in prevailing wind direction, coastal currents, re-establishment of a new equilibrium profile, sea level rise, sea level fall, exceptional storms, hurricanes/cyclones, and tsunami events. These coastal factors are reviewed with special attention to effects due to changes in sea level. In the Indian Ocean, sea level seems to have remained virtually stable over the last 40-50 years. Coastal erosion in the Maldives was caused by a short lowering in sea level in the 1970s. In Bangladesh, repeated disastrous cyclone events cause severe coastal erosion, which hence has nothing to do with any proposed sea level rise. Places like Tuvalu, Kiribati and Vanuatu – all notorious for an inferred sea level rise – have tide gauges which show no on-going sea level rise. Erosion is by no means a sign of sea level rise. Coastal erosion occurs in uplifting regions as well as in subsiding regions, or virtually stable areas. Coastal morphology provides excellent insights to the stability.”

Scientists: Sea Levels Are Barely Rising — And The Rise Is ‘Not Anthropogenic In Origin’

The sea-levels-are-dangerously-rising narrative has become so commonly headlined in the popular media that it is effectively considered an unquestioned “fact” that needs no further investigation.

But some scientists have actually taken the time to investigate relative sea level rise in long-term records from tide gauges.  And what they have found is that in some locations sea levels are rising, in other locations sea levels are falling, and most of the world’s tide gauges show that sea levels are stable, with no significant trends either way.  In fact, scientists assert that the overall rate of rise from the 19th/20th centuries to now — including the most recent decades  — has only been about 1 mm/yr, which is about 4 inches per century.  These modest rates are well within the range of natural variability.

“Tide gauges dating back to the 19th century were located where sea levels happened to be rising. Data reconstructions based on these tide gauges are therefore likely to over-estimate sea level rise.”

“Tide gauges provide the most reliable measurements, and best data to assess the rate of change. We show as the naïve averaging of all the tide gauges included in the PSMSL surveys show “relative” rates of rise about +1.04 mm/year (570 tide gauges of any length). If we consider only 100 tide gauges with more than 80 years of recording the rise is only +0.25 mm/year. This naïve averaging has been stable and shows that the sea levels are slowly rising but not accelerating.  … We conclude that if the sea levels are only oscillating about constant trends everywhere as suggested by the tide gauges, then the effects of climate change are negligible, and the local patterns may be used for local coastal planning without any need of purely speculative global trends based on emission scenarios.”

Furthermore, even in the regions of the world where sea levels are indeed rising, and rising rapidly (i.e., the tropical Pacific), scientists have acknowledged that an anthropogenic fingerprint cannot even be detected in the sea level rise trends.  Natural oscillations related to internal ocean processes are predominantly what drive sea level changes, not anthropogenic CO2 emissions.

“[T]he large sea-level rise after 1970, is completely contained by the found small residuals, long-term oscillators, and general trend. Thus, we found that there is (yet) no observable sea-level effect of anthropogenic global warming in the world’s best recorded region.”

To summarize, the world’s shorelines have been growing, not shrinking, in recent decades.  This growth or relative net change in coastal land area is primarily related to the effects of non-climatic processes such as coastal erosion (or the lack of it) and subsidence and uplift trends —  just as the loss of coastal land area in some locations is predominantly due to these same natural non-climatic processes.

Tide gauges averaged from all over the globe indicate that sea levels are rising very modestly, and well within the range of natural variability.  In the regions of the world where sea levels are rising, the rise is predominantly due to internal processes, as an anthropogenic fingerprint in sea level rise trends has not been detectable.

Of course, the above analysis does not fit the narrative of anthropogenically-induced dangerous sea level rise that will wipe out coastal cities and lead to the catastrophic displacement of 100s of millions of people world-wide in the coming decades.  Perhaps this is why some may find this summary of scientific conclusions undermining this popular doomsday narrative so . . . surprising.