Browse: Home / 2016 / November / 14 / Since 1982, Temperature Records Show No Warming Other Than That Due To Natural El Niño Warmth-Inducing Events

Since 1982, Temperature Records Show No Warming Other Than That Due To Natural El Niño Warmth-Inducing Events

Over the course of years to decades, the heat contained in the ocean naturally undulates, with more or less upwelling cooler waters rising to the surface.  Naturally-occuring El Niño (wind current) events greatly influence the prevention of cooler waters from upwelling to the surface; this phenomenon, in turn, ultimately elicits an overall surface warming event (less cooling = net warming).

Below is a very simplified version of “How El Niño Works” from NASA:

“During a normal year, strong, easterly surface winds (winds blowing from the east to the west) along the equator, cause upwelling of cold, nutrient rich water along the coast of South America. This keeps the waters of the central Pacific relatively cool. … When, for an as yet, unknown reason the easterly surface winds weaken, or reverse, the warm pool moves from the western Pacific to the central and eastern Pacific ocean basin. This situation is known as an El Niño, and when this happens, heavy rainfall occurs along the western coasts of Peru, Mexico and California instead. The warm water also acts as a cap that prevents cold water from upwelling along the eastern edge of the Pacific.”

Over time, net step-changes induced by each successive El Niño warming event may lead to an overall surface warming trend. The more frequent and/or powerful the El Niño event(s), the greater the net step change.  These internal ocean heat circulation processes that lead to more or less heat welling up to the ocean surface can significantly account for the warming trend since the early 1980s, meaning that the increase in temperature could be mostly explained by natural variability, not anthropogenic intervention.

This conclusion has been reached by scientists Large and Yeager (2012), who maintain that, over the 1984-2006 period,  the observed “diminished ocean cooling [i.e., warming] due to vertical ocean processes” imply that “natural variability” can explain the rise in sea surface temperatures since 1984 rather than anthropogenic climate change.

“Global satellite observations show the sea surface temperature (SST) increasing since the 1970s in all ocean basins, while the net air–sea heat flux Q decreases. Over the period 1984–2006 the global changes are 0.28°C in SST and −9.1 W m−2 in Q, giving an effective air–sea coupling coefficient of −32 W m−2 °C−1  …[D]iminished ocean cooling due to vertical ocean processes played an important role in sustaining the observed positive trend in global SST from 1984 through 2006, despite the decrease in global surface heat flux. A similar situation is found in the individual basins, though magnitudes differ. A conclusion is that natural variability, rather than long-term climate change, dominates the SST and heat flux changes over this 23-yr period.“

Below is an extremely simplistic illustration of the step-change influence of El Niño events on surface temperature.  Notice that between each El Niño-induced warming event, the temperature declines or flattens until the advent of the next El Niño event.

El Niño-Induced Warming Events Are Natural, And Not Influenced By Human Activity

While discussing the powerful 2015-’16 El Niño a few months ago, Dr. Fredolin Tangang — a Malaysian climate scientist, oceanographer, and the vice-chairperson of the IPCC —  maintains that the warming of the ocean surface which occurs with the onset of an El Niño event has not been linked to anthropogenic climate change, but is instead a naturally-occurring phenomenon.

The current El Nino phenomenon that has brought prolonged drought and sweltering heat to Malaysia is the strongest of the 20 over the last 60 years, but there is no concrete evidence to link its heat intensity to global warming, says an expert.  Climatologist and oceanographer Prof Dr Fredolin Tangang of Universiti Kebangsaan Malaysia said this year’s El Nino was even more extreme than the severe phenomena experienced in 1982/82 and 1997/98.

“There is no conclusive evidence that the occurrence of El Nino (frequency and intensity) is influenced by climate change,” said Tangang, who had served from 2008 to 2015 as vice-chairperson of the Intergovernmental Panel on Climate Change (IPCC), a United Nations agency.

“El Nino is a naturally occurring phenomenon, which is part of the inter-annual variability associated with oscillation of the atmosphere-ocean interaction in the Pacific Ocean that occurs in a two- to seven-year cycle.”

A few months before Tangang’s announcement, Mike Halpert, NOAA’s deputy director of the Climate Prediction Center, had also declared that anthropogenic climate change was playing an “insignificant role, if any role at all” on the warmth experienced during 2015-’16.

SHAPIRO: OK. So El Nino plays a role [in the 2015-’16 warming]. The Arctic oscillation plays a role. What about climate change? Is that playing a role?

HALPERT: If it is, it’s probably fairly insignificant at this point. If it were to play a role, it would be more likely if, somehow, climate change is impacting either the Arctic oscillation or El Nino, and we’re not really aware that it is at this point. If you think about, maybe – the high temperature over the weekend was 70, so maybe without climate change, it would’ve been 69. I think it’s a fairly insignificant role, if any role at all.

Since 1982, Temp Records Show No Warming Other Than Due To The All-Natural El Niño Warming Events, With Cooling In Between Each Event

In the satellite record (UAH), the significant warming effects of moderate to strong El Niño events on temperature can be reasonably identified.  As mentioned above, notice the cooling or flattened temperatures that occur between each warmth-inducing El Niño event.

Graphs below are courtesy of woodfortrees.org. 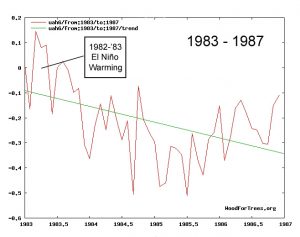 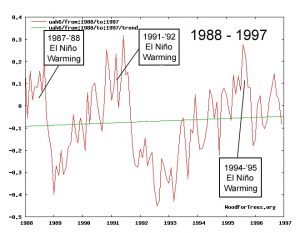 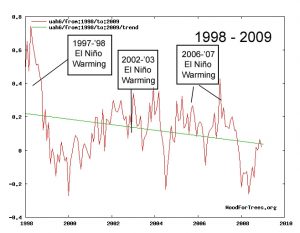 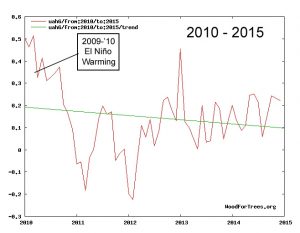 If we combine these graphs to illustrate the effects of El Niño events on temperature over the entire 1983 to 2015 period, a somewhat disorderly version of a step-change warming trend emerges that looks similar in scope to the neat and simplified El Niño-induced step-change graph shown above. 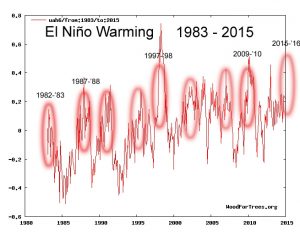 So if El Niño events can significantly explain the step-change warming trend in the temperature record since the early 1980s, what physical mechanism(s) may explain why El Niño events occur?  According to scientists, the Sun is the main catalyst.

“Recent SST and atmospheric circulation anomaly data suggest that the 2015/16 El Niño event is quickly decaying. Some researchers have predicted a forthcoming La Niña event in late summer or early fall 2016. From the perspective of the modulation of tropical SST by solar activity, the authors studied the evolution of the 2015/16 El Niño event, which occurred right after the 2014 solar peak year. Based on statistical and composite analysis, a significant positive correlation was found between sunspot number index and El Niño Modoki index, with a lag of two years. A clear evolution of El Niño Modoki events was found within 1–3 years following each solar peak year during the past 126 years, suggesting that anomalously strong solar activity during solar peak periods favors the triggering of an El Niño Modoki event. The patterns of seasonal mean SST and wind anomalies since 2014 are more like a mixture of two types of El Niño (i.e., eastern Pacific El Niño and El Niño Modoki), which is similar to the pattern modulated by solar activity during the years following a solar peak. Therefore, the El Niño Modoki component in the 2015/16 El Niño event may be a consequence of solar activity, which probably will not decay as quickly as the eastern Pacific El Niño component. The positive SST anomaly will probably sustain in the central equatorial Pacific (around the dateline) and the northeastern Pacific along the coast of North America, with a low-intensity level, during the second half of 2016.”

Summarizing, scientists Lakshmi and Tiwari (2015) point out that climate changes are primarily driven by solar activity and El Niño events.  This leaves little to no room for anthropogenic activities to have a significant influence on the Earth’s climate.

“Introduction: Several recent studies of solar–geomagnetic effects on climate have been examined on both global as well as on regional scales.  The Sun’s long-term magnetic variability is the primary driver of climatic changes. The magnetic variability (mostly short-term components) is due to the disturbances in Earth’s magnetic fields caused by the solar activity, which is usually indicated by indices of geomagnetic activity. The Sun’s magnetic variability modulates the magnetic and particulate fluxes in the heliosphere. This determines the interplanetary conditions and imposes significant electromagnetic forces and effects upon planetary atmospheres. All these effects are due to the changing solar-magnetic fields which are relevant for planetary climates, including the climate of the Earth. The Sun–Earth relationship varies on different time scales of days to years bringing a drastic influence on the climatic patterns. The ultimate cause of solar variability, at time scales from decadal to cen tennial to millennial or even longer scales, has its origin in the solar dynamo mechanism. During the solar maxima, huge amounts of solar energy particles are released, thereby causing the geomagnetic disturbances. … The 11 years solar cycle acts an important driving force for variations in the space weather, ultimately giving rise to climatic changes. Therefore, it is very important to understand the origin of space climate by analyzing the different proxies of solar magnetic variability.”

“The another most important climate variation is El Niño–Southern Oscillation (ENSO) events, which impact the global oceanic and atmospheric circulations which thereby produce droughts, floods and intense rainfall in certain regions. The strong coupling and interactions between the Tropical Ocean and atmosphere play a major role in the development of global climatic system. The El Niño events generally recur approximately every 3–5 years with large events spaced around 3–7 years apart. The El Niño–Southern Oscillation (ENSO) phenomena has shown huge impact on the Asian monsoon (Cole et al., 1993), Indian monsoon (Chowdary et al., 2006, 2014) as well as globally (Horel and Wallance, 1981; Barnett, 1989; Yasunari, 1985; Nicholson, 1997). In particular, the El Niño, solar, geomagnetic activities are the major affecting forces on the decadal and interdecadal temperature variability on global and regional scales in a direct/indirect way.”

64 responses to “Since 1982, Temperature Records Show No Warming Other Than That Due To Natural El Niño Warmth-Inducing Events”