As the reputed world leader in green energy policy, Germany plans to eliminate nuclear power as an energy source in the next 5 years.

A 2011 decision to phase out nuclear power by 2022  has meant that renewables like wind and solar power are expected to swiftly take the place of nuclear energy on the German power grid.  The portion of Germany’s power generation from wind and solar (renewables) has indeed risen dramatically in the last 10 years: 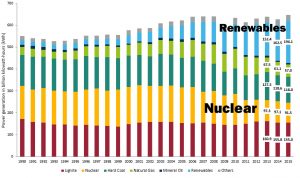 Germany’s vociferous allegiance to renewables as a power generation source has elicited controversy.   Wind and solar are very labor- and material-intensive (expensive) energy sources, and the dramatic rise in solar and wind power capacity has come with great financial expense to German citizens.  Poorer households have long been the most adversely affected.  Dating back to 2000, electricity prices have risen by 80% in Germany, leaving 7 million citizens “energy poor” (meaning that more than 10% of their income has to be spent on heating and electrifying their homes).

Analysis by the European Commission indicates that “nearly 11% of the EU’s population [encompassing 54 million people] are in a situation where they live in  households in which they find themselves unable to heat their homes at an affordable cost,” which may effectively put their lives at risk.   This latter point is not an exaggeration.  In the UK, where heating costs rose 63% between 2009 and 2014, 25% of citizens over 60 are classified as “energy poor”, leaving the elderly population especially vulnerable.  During the frigid winter of 2014, the number of “excess winter deaths” reached 49,260, of which about 14,780  were due to people living in cold homes that they couldn’t afford to heat.

And despite the steep, expensive rise in power generated by renewables since about 2000, Germany still obtained about 44% of its power from coal as of 2014, which is a higher share than in the United States (33% as of 2015).  Hundreds of U.S. coal plants have been shuttered in recent years largely because of a monumental nation-wide shift to natural gas power generation, a cleaner fuel that emits much less CO2 upon combustion than does coal.

(In the U.S., in fact, there has been a 12% decline in overall CO2 emissions since 2005 despite the fact that the U.S population has risen by 30 million during those 10 years.  As mentioned above, much of the decline in emissions is directly connected to the rapid displacement of coal with natural gas power generation.  While the rise in U.S. solar power has also been substantial in the last decade, “for every ton of carbon dioxide cut by solar power, hydraulic fracturing for natural gas cut 13 tons.”)

Germany’s heavy reliance on coal — the highest in the EU —  is very likely to continue indefinitely despite the nation’s stated commitments to the Paris Agreement and CO2 emissions reductions.  The much lower power-generating capabilities of renewables due to their intermittent output (the Sun has to shine and the wind must blow) has meant that reliable backup capacity — fossil fuels or nuclear — must remain on the grid.  Since nuclear power is set to be phased out of Germany by 2022, coal necessarily has to stay, even expand.  The natural consequence is that Germany’s CO2 emissions have not declined since 2009, and instead there has been a slight emissions uptick in recent years, as the dramatic increase in renewables has not come close to offsetting the greater CO2 emissions generated from the renewed German emphasis on coal.

What’s happening in Germany is, unfortunately, a bellwether for what is to come in other large wealthy countries attempting to make renewables the kingpin of their power grids.  The unspoken truth about renewables was succinctly summarized in a 2012 Los Angeles Times analysis :

“As more solar and wind generators come online, … the demand will rise for more backup power from fossil fuel plants.”

The full article, entitled “Rise in renewable energy will require more use of fossil fuels”  also points out that wind turbines often produce a tiny fraction (1 percent?) of their claimed potential, meaning the gap must be filled by fossil fuels:

Wind provided just 33 megawatts of power statewide in the midafternoon, less than 1% of the potential from wind farms capable of producing 4,000 megawatts of electricity.

As is true on many days in California when multibillion-dollar investments in wind and solar energy plants are thwarted by the weather, the void was filled by gas-fired plants like the Delta Energy Center.

One of the hidden costs of solar and wind power — and a problem the state is not yet prepared to meet — is that wind and solar energy must be backed up by other sources, typically gas-fired generators. As more solar and wind energy generators come online, fulfilling a legal mandate to produce one-third of California’s electricity by 2020, the demand will rise for more backup power from fossil fuel plants.

Another observational analysis suggests that much of the power generation thought to be attributed to wind actually came from backup sources, or fossil fuels:

“More than half the electric generation nominally credited to wind power is actually produced by fossil fuels, mostly natural gas.”

Analysis from a recently published resource management paper suggests that overall CO2 emissions will actually double in the next 16 years (by 2032) in Canada (Ontario) as more wind and solar capacity is added.  Wind and solar require reliable backup when the Sun isn’t shining and/or the wind isn’t blowing…and fossil fuel energies (natural gas, coal) are the reliable backup(s) of choice.

Why Will Emissions Double as We Add Wind and Solar Plants?  [pg. 15]

Wind and Solar require flexible backup generation.  Nuclear is too inflexible to backup renewables without expensive engineering changes to the reactors.  Flexible electric storage is too expensive at the moment. Consequently natural gas provides the backup for wind and solar in North America. When you add wind and solar you are actually forced to reduce nuclear generation to make room for more natural gas generation to provide flexible backup.

From 2016 to 2032 as Ontario phases out nuclear capacity to make room for wind and solar, CO2 emissions will double (2013 LTEP data).  In Ontario, with limited economic hydro and expensive storage, it is mathematically impossible to achieve low CO2 emissions at reasonable electricity prices without nuclear generation.

Scientists have increasingly weighed in on the vacuousness of the current emphasis on renewable energy generation.  For example…

Solar power is a “non-sustainable energy sink” and “will not help in any way to replace the fossil fuel” even though “many people believe renewable energy sources to be capable of substituting fossil or nuclear energy.”

Abstract: Many people believe renewable energy sources to be capable of substituting fossil or nuclear energy. However there exist very few scientifically sound studies, which apply due diligence to substantiating this impression. … The main reasons are due to the fact that on one hand, solar electricity is very material-intensive, labour-intensive and capital-intensive and on the other hand the solar radiation exhibits a rather low power density.

Conclusion: [A]n electrical supply system based on today’s PV [photovoltaic] technologies cannot be termed an energy source, but rather a non-sustainable energy sink … [I]t has become clear that photovoltaic energy at least will not help in any way to replace the fossil fuel.

For wind and solar, the “energy return on energy invested falls, and environmental costs rise” as more wind and solar power capacity is added.

Highlights: We argue it is unlikely that RE [renewable energy] can meet existing global energy use.

The most important RE [renewable energy] sources, wind and solar energy, are also intermittent, necessitating major energy storage as these sources increase their share of total energy supply. We show that estimates for the technical potential of RE [renewable energy] vary by two orders of magnitude, and argue that values at the lower end of the range must be seriously considered, both because their energy return on energy invested falls, and environmental costs rise, with cumulative output.

The “numbers just don’t add up” to curtail world temperatures with wind and solar, and thus our current efforts “will almost surely fail.”

The Texas A&M researchers modelled the projected growth in global population and per capita energy consumption, as well as the size of known reserves of oil, coal and natural gas, and greenhouse gas emissions to determine just how difficult it will be to achieve the less-than-2 degree Celsius warming goal.  “It would require rates of change in our energy infrastructure and energy mix that have never happened in world history and that are extremely unlikely to be achieved,” explains Jones.   “Just considering wind power, we found that it would take an annual installation of 485,000 5-megawatt wind turbines by 2028. The equivalent of about 13,000 were installed in 2015. That’s a 37-fold increase in the annual installation rate in only 13 years to achieve just the wind power goal,” adds Jones.  Similar expansion rates are needed for other renewable energy sources.  “To even come close to achieving the goals of the Paris Agreement, 50 percent of our energy will need to come from renewable sources by 2028, and today it is only 9 percent, including hydropower. For a world that wants to fight climate change, the numbers just don’t add up to do it.”

Considering the inevitable increases in CO2 emissions (due to the need for fossil fuel backup),  the potential health hazards and exponentially-growing financial burden shouldered by the world’s (mostly poor) citizens, the impossibility of supplanting fossil fuels in power generation…associated with an intentioned global-scale increase in renewable energy in the coming decades, one needs to ask: Are renewables like wind and solar even worth it?