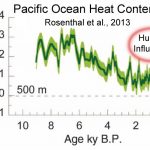 Share this… Facebook TwitterOceans Warmed 6 Times Faster Than Modern Rates During The Mid-Holocene Annotated graph from Rosenthal et al. (2013) illustrating the steep amplitude of natural variations in ocean heat It has long been acknowledged by scientists that significant changes in deep ocean heat content have occurred in the past in the absence of […]