Modern Rates During The Mid-Holocene 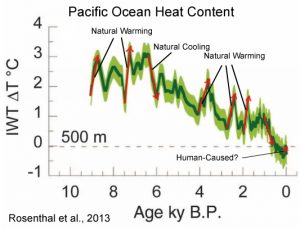 It has long been acknowledged by scientists that significant changes in deep ocean heat content have occurred in the past in the absence of changes or forcing from CO2.  Stott et al. (2007), for example, conclude that deep ocean temperatures rose by 2°C within a 2,000-year time span (19,000 to 17,000 years ago) about a 1,000 years before CO2 concentrations (and surface temperatures) began to rise.

Deep sea temperatures warmed by ~2C between 19 and 17 ka B.P., leading the rise in atmospheric CO2 and tropical surface ocean warming by ~1000 years.

Similarly,  Demezhko and Gornostaeva (2015) found that the heat energy change in the deep oceans during the climate transition from the last ice age to this current interglacial occurred “2-3 thousands of years” before the increases in surface temperature and CO2, and that “the increase of carbon dioxide may be a consequence [rather than a cause] of temperature increasing”.  The authors then acknowledge that this suggests that there was “no significant contribution of CO2 forcing to climatically caused heat flux and thus to the temperature increase during the Pleistocene-Holocene warming”.

Conclusion: [I]nterglacial warming is eccentricity and polar ice regrowth regulated, Great Summer forced, and dust-ice albedo amplified. And the greenhouse-gas attributes of CO2 play little or no part in this complex feedback system.

….while scientists Douglass and Knox (2014) identify the source of modern deep ocean temperature forcing that has an “unquestionably solar origin” manifested by El Niño/La Niña phenomena.

Global ocean temperature time series from the surface to depths of 2000 m since the year 2000 are found to agree in detail with those of other diverse climate indices. It is asserted that these systems are driven by a forcing unquestionably of solar origin that has two manifestations: (1) a direct phase-locked response to what is identified as a solar forcing at a frequency of 1.0 cycle/yr for the whole time series; (2) a second phase-locked response at a period of two years or three years. With these findings it is becoming clear that the entire climate system is responding to the varying incident solar radiation… The most prominent manifestations of the pattern are found in the El Niño/La Niña phenomena.

Advocates of the assumption that CO2 variations are a primary cause of changes in deep ocean heat content (i.e., those who author government-sponsored IPCC reports and activists for the anthropogenic global warming cause) have necessarily believed that past natural variations in deep ocean heat content are very slow and gradual.  They have presumed that the forcing from Milankovitch cycles (changes in solar radiation absorbed by the Earth’s surface due to orbital variations) are the cause of deep ocean changes over time, but that these changes occur only as slowly as orbital variations occur — on millennial scales (“several thousand years“), not in decades to centuries.  In this way, they can deny that the Sun plays a role in modern climate changes…despite burgeoning evidence to the contrary.  The Stott et al. (2007) finding that deep oceans warmed at a rate of 1°C/1,000 years referenced above would be consistent with these assumptions.

Brown University geologist Samantha Bova and her colleagues reach a different conclusion, however, in a paper just published online for the prestigious journal Geophysical Research Letters.  These scientists have found that, in the absence of any significant CO2 concentration changes or human influence during the Holocene (i.e., the last ~10,000 years), the deep oceans naturally warmed by more than 2°C in a span of just 200 years, which is several times the rate in which they are alleged to have warmed in the last ~60 years of the supposedly dominant anthropogenic influence on climate.  In fact, Bova et al. (2016) conclude that deep ocean temperature changes for the last 200 years are apparently so negligible they are “below the detection limits”.

The observational record of deep-ocean variability is short, which makes it difficult to attribute the recent rise in deep ocean temperatures to anthropogenic forcing. Here, we test a new proxy – the oxygen isotopic signature of individual benthic foraminifera – to detect rapid (i.e. monthly to decadal) variations in deep ocean temperature and salinity in the sedimentary record. We apply this technique at 1000 m water depth in the Eastern Equatorial Pacific during seven 200-year Holocene intervals. Variability in foraminifer δ18O over the past 200 years is below the detection limit [a change in ocean heat cannot be detected in the past 200 years], but δ18O signatures from two mid-Holocene intervals indicate temperature swings >2 °C within 200 years.

According to the IPCC (2013), 93% of the heat energy in the climate system claimed to be due to anthropogenic global warming is found in the oceans (AR5, Chapter 3).  Levitus et al. (2012) estimate that the heat energy change (converted to temperature) amounted to an increase of just +0.09°C between 1955 and 2010 in the upper 2000 meters of the ocean, or less than one-tenth of one degree over 55 years.

Again, natural variation in ocean temperatures may reach amplitudes of + or – 1°C every 100 years without any external forcing from anthropogenic CO2 emissions.  So if 93% of the change forced by the alleged human climate influence  has only produced a temperature change of hundredths to tenths of a °C in the deep oceans since 1955, or since CO2 concentrations rose by about 75 parts per million (315 ppm in 1955 to 390 ppm in 2010), this would clearly indicate that it is extremely difficult if not effectively impossible to confidently attribute the practically imperceptible change in ocean temperature to anthropogenic CO2 emissions, or to CO2 in general.

More succinctly, if deep ocean temperatures can naturally rise by 1°C in 100 years without any change in CO2, then attributing changes in ocean temperature that are already “below the detection limit” for the last 200 years (or just ~0.1°C since 1955) to anthropogenic CO2 forcing is highly presumptuous at best.