“In science and philosophy, ad hoc means the addition of extraneous hypotheses to a theory to save it from being falsified. Ad hoc hypotheses compensate for anomalies not anticipated by the theory in its unmodified form.  Scientists are often skeptical of scientific theories that rely on frequent, unsupported adjustments to sustain them. Ad hoc hypotheses are often characteristic of pseudoscientific subjects such as homeopathy.”   — Wikipedia on the scientific definition of ad hoc hypotheses

Observational evidence indicates that Antarctic sea ice has been advancing in recent decades, a trend that has puzzled climate modelers who assume that a warming globe will inhibit sea ice growth.  About 86% of all climate models have indicated that sea ice would show a declining trend for Antarctica, and just 14% (1 out of every 7) concluded sea ice extent would advance.  The average observed growth has been +1.29 (x 105 km2/decade) during the satellite era (since 1979), whereas the models projected a decline of -3.36  (x 105 km2/decade) on average.

Forty-nine models, almost all of the CMIP5 climate models and earth system models with historical simulation, are used. For the Antarctic, multi-model ensemble mean (MME) results can give good climatology of sea ice extent (SIE), but the linear trend is incorrect. The linear trend of satellite-observed Antarctic SIE [sea ice extent] is +1.29 (±0.57) × 105 km2 decade−1 ; only about 1/7 CMIP5 models show increasing trends, and the [modeled] linear trend of CMIP5 MME is negative with the value of −3.36 (±0.15) × 105 km2 decade−1 .

Not willing to countenance the fact that their modeling was so terribly wrong, advocates of alarming anthropogenic global warming recently decided it was time to get creative in explaining why their modeling could still be quite right after all.  Of course, these advocates could not and would not admit that decades of growing sea ice trends would indicate that Antarctica and the surrounding Southern Ocean have not been warming, but cooling, during the last 3 decades in concert with the facile principle that cooler surface waters allow more sea ice to form.

Sea-ice growth and melt are determined by the heat balance between the OHF [ocean heat flux] and the conductive heat transfer through the overlying ice cover. … Low atmospheric temperatures drive sea-ice formation, while relatively high ocean temperatures that can limit ice growth are a principal cause of sea-ice melt in the Antarctic.

Acknowledging that the southern pole has been cooling since the 1980s would serve to undermine the paradigm that says the entire globe has been steadily warming due to human activity.  In other words, a cooling Antarctica and Southern Ocean doesn’t advance the cause.

So instead of acknowledging that Antarctica and the surrounding Southern Ocean have been not been warming recently (as observational evidence clearly indicates), these advocates decided to issue a convoluted explanation about why sea ice grows in a warming world.  Well, in the Southern Hemisphere, anyway.  In the Northern Hemisphere, it is wholly accepted that warming causes sea ice to decline, which has been observed in the Arctic in recent decades.  In the Southern Hemisphere, warming causes sea ice to grow.  Confused?  We’re just getting started.

Surely this convoluted, ad hoc “explanation” for why anthropogenic global warming causes sea ice growth would not be taken seriously.  Right?  Well, actually, it has been taken very seriously.  No less than the journal Nature embraced it.  NSIDC’s director Mark Serreze promoted this makeshift conceptualization too.  And, of course, the usual suspects in the print media were all to eager to agree that human CO2 emissions cause sea ice to grow in Antarctica (and simultaneously shrink in the Arctic).

Ocean warming may be a major driver of sea-ice expansion in the Antarctic, researchers report today in Nature Geoscience. … Scientists have known for several years that meltwater from ice sheets can form a cold, fresh layer on the ocean surface that protects sea ice from the warmer waters below. … “The paradox is that global warming leads to more cooling and more sea ice around Antarctica,” says Richard Bintanja, a climate researcher at the Royal Netherlands Meteorological Institute in Utrecht.

Claim was made by Mark Serreze, director of the National Snow and Ice Data Centre … Shift is caused by water melting from beneath the Antarctic ice shelves … Scientists claim it is then re-frozen back on surface, increasing sea ice

A new paper shreds this ad hoc explanation linking human activity to sea ice growth in the Southern Hemisphere.  Pauling et al. (2016) find that internal dynamics could explain the cooling and increase in sea ice extent in recent decades, and that an enhancement of the “freshwater input by an amount within the range of estimates of the Antarctic mass imbalance did not have any significant effect on either sea ice area magnitude or trend” — even if one assumes that anthropogenic forcing causes a decline in sea ice to offset the hypothetical growth trend due to enhanced “freshwater input”.

The possibility that recent Antarctic sea ice expansion resulted from an increase in freshwater reaching the Southern Ocean is investigated here. … Two sets of experiments were conducted from 1980 to 2013 in CESM1(CAM5), one of the CMIP5 models, artificially distributing freshwater either at the ocean surface to mimic iceberg melt or at the ice shelf fronts at depth. An anomalous reduction in vertical advection of heat into the surface mixed layer resulted in sea surface cooling at high southern latitudes and an associated increase in sea ice area. Enhancing the freshwater input by an amount within the range of estimates of the Antarctic mass imbalance did not have any significant effect on either sea ice area magnitude or trend.

A Better Explanation: Antarctica, Southern Ocean Have Been Cooling Since The 1980s

As mentioned above, Antarctica and the Southern Ocean have not been cooperating with anthropogenic “global” warming models.  The region has been cooling for decades.  And a cooling Southern Ocean has led to increasing sea ice trends.  In other words, no convoluted explanations are necessary.

[A]ll of these studies reported a close relationship between [sea ice extent] and sea surface temperature (SST) whereby sea ice gain is associated with lower SSTs and vice versa. … Cooling is evident over most of the Southern Ocean in all seasons and the annual mean, with magnitudes approximately 0.2–0.4°C per decade or 0.7–1.3°C over the 33 year period [1979-2011].

[O]ur spatial analysis of Antarctic meteorological data demonstrates a net cooling on the Antarctic continent between 1966 and 2000, particularly during summer and autumn. 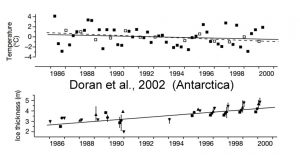 Here we use a stacked temperature record to show an absence of regional [Antarctic Peninsula] warming since the late 1990s. The annual mean temperature has decreased at a statistically significant rate, with the most rapid cooling during the Austral summer.

Over the 36-year satellite era, significant linear trends in annual mean sea-ice extent, surface temperature and sea-level pressure are superimposed on large interannual to decadal variability. Most observed trends, however, are not unusual when compared with Antarctic palaeoclimate records of the past two centuries. With the exception of the positive trend in the Southern Annular Mode, climate model simulations that include anthropogenic forcing are not compatible with the observed trends. This suggests that natural variability overwhelms the forced response in the observations, but the models may not fully represent this natural variability or may overestimate the magnitude of the forced response. 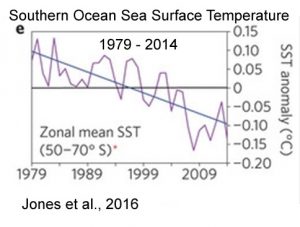 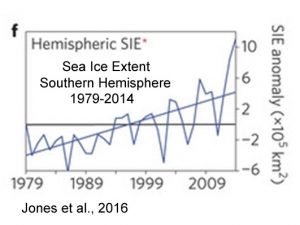 In the Northern Hemisphere, Arctic sea ice declines during warm phases (e.g., the 1920s to 1940s and the 1990s to present), and Arctic sea ice increases during cooling phases (like it did during the 1950s to 1980s).  Similarly, when the Southern Ocean and Antarctic continent warmed during the 1950s to 1980s, sea ice declined.  Since the 1980s, Antarctica and the Southern Ocean have cooled, and, consequently, sea ice area has grown.  Not only that, but a majority of East Antarctic glaciers have been advancing since the 1990s.  Again, no convoluted, ad hoc explanations are necessary.  Cooling contributes to ice growth trends, and warming contributes to declining ice trends.

Another analysis of a 21-station data set from Antarctica by Comiso (1999) found a warming trend equivalent to 1.25°C per century for a 45-year record beginning in the 1950s but a slight cooling trend from 1979 to 1998. The slight cooling trend for this later 20-year period also was confirmed via analysis of surface temperatures over the whole continent, as inferred from satellite data.

[S]ea surface temperatures and surface air temperatures decreased during 1979–2011, consistent with the expansion of Antarctic sea ice. In contrast, the Southern Ocean and coastal Antarctica warmed during 1950–1978.

Despite large fluctuations between glaciers—linked to their size—three epochal patterns emerged: 63 per cent of glaciers retreated from 1974 to 1990, 72 per cent advanced from 1990 to 2000, and 58 per cent advanced from 2000 to 2010.  … Indeed, several studies report increasing sea-ice concentrations in the study region from approximately 1980 to 2010, which is consistent with the predominance of glacier advance since 1990, when above-average sea-ice and fast-ice concentrations could have suppressed calving by increasing back-pressure on glacier termini. In contrast, reduced sea ice concentrations from the 1950s to the mid 1970s are consistent with glacier retreat during the 1960s and 1970s, when air temperatures were also increasing along the Pacific coast. 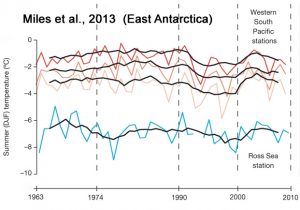 The reason why advocates of an alarming anthropogenic influence on climate are so intent on “explaining” why warming causes sea ice to grow in the Southern Hemisphere is simple: what has been observed with Antarctic sea ice undermines the claim that anthropogenic global warming is predominantly responsible for polar sea ice trends.  And the observation that Antarctica warmed during the 1950s to 1980s, when CO2 levels were in the “safe” range (under 350 ppm), but it has cooled since the 1980s as CO2 levels exploded past 400 ppm, is also very incompatible with the conclusion that humans determine the ice trends in the southern polar climate with their CO2 emissions.

At some point it must be acknowledged that something is seriously wrong with climate models that presume anthropogenic influences dominate the trends in polar sea ice.  One wonders what the next makeshift “explanation” will be for a likely increase in Arctic sea ice extent at some point in the near future, or as the warming phase in the Arctic draws to a close in the coming years.