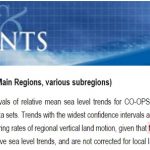 Share this…FacebookTwitterAre Modern Rates Of Sea Level Rise Too Slow For Optimal Coral Growth? Since the 20th century began, global sea levels have been rising at rates of about 1.7 – 1.8 mm/year, or about 0.17 to 0.18 of a meter (~7  inches) per century. NOAA  Zerbini et al., 2017 “Our estimated rates for the northern […]