Too Slow For Optimal Coral Growth?

“Our estimated rates for the northern Mediterranean, a relatively small regional sea, are slightly lower than the global mean rate, + 1.7 ± 0.2 mm/year, recently published in the IPCC AR5 (Intergovernmental Panel on Climate Change 5th Assessment Report) … Our regional results, however, are in close agreement with the global mean rate, + 1.2 mm/year, published by Hay et al. (2015) which is currently being discussed by the oceanographic community.”

“Sea level change in the Indian Ocean is about 1.5 mm/year in the past sixty years or so, whereas the global sea level trends are a bit higher [1.7 mm/year].”

Corals, thought to be biologically fragile and highly susceptible to abrupt sea level changes and high sea temperatures…survived these much higher rates of sea level rise from the geological past.

Scientists have apparently found that coral communities do not grow as well, but instead they “shut down” — even reaching very high mortality rates (85%) — when sea levels fall rapidly.  Falling sea levels (and cooling) are suggested to be more lethal to corals than high-temperature bleaching events during El Niño years or rising sea levels (Eghbert et al., 2017).

These findings would not appear to support the current perspective that modern coral communities are threatened by “global” warming and rapidly rising sea levels.

“In September 2015, altimetry data show that sea level was at its lowest in the past 12 years [Indonesia], affecting corals living in the bathymetric range exposed to unusual emersion. In March 2016, Bunaken Island (North Sulawesi) displayed up to 85% mortality on reef flats dominated by Porites, Heliopora and Goniastrea corals with differential mortality rates by coral genus.”

“Over the last few decades, the global decline of modern reefs has been linked to environmental and climatic changes in response to anthropogenic activities.  However, recent geological and ecological research on fossil reefs in the Great Barrier Reef (GBR) and wider Indo-Pacific identified intervals of significant reef ‘turn-off’ in response to natural environmental forces earlier in their development during the mid- to late Holocene.”

“Increased upwelling, turbidity and cyclone activity in response to increased sea-surface temperature (SST’s), precipitation and El-Nino Southern Oscillation variability have been ruled out as possible mechanisms of reef turn-off for the mid-outer platform reefs. Rather, a fall (~0.5 m) in relative sea level at 4–3.5 ka is the most likely explanation for why reefs in the northern and southern regions turned off during this time.”

“Similar hiatuses in Holocene reef growth were identified in Japan from about 5.9 to 5.8 ka, 4.4 to 4.0 ka and from 3.3 to 3.2 ka. They were attributed to oscillating sea level and relatively cold sea-surface temperatures.” 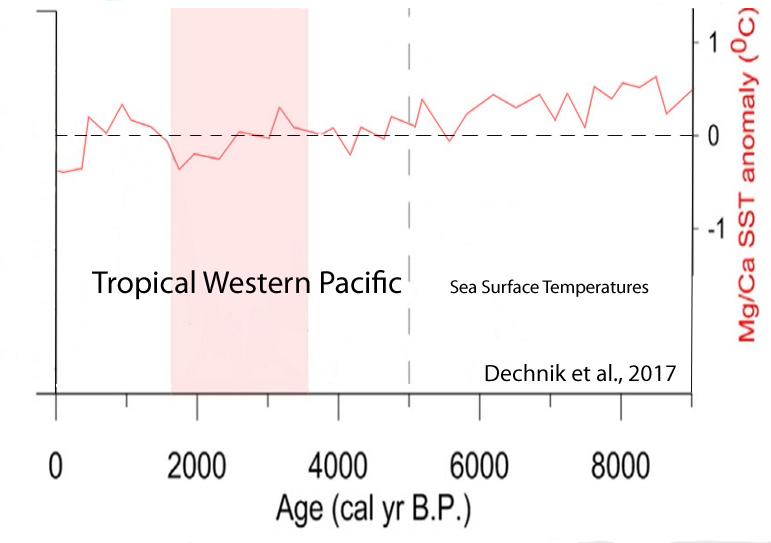 “The central dome of each microatoll grew during a period when RSL was high; RSL then fell rapidly, killing the upper portions of the corals; RSL then stabilized at a lower elevation, forming a series of low concentric annuli ∼0.6 m higher than present-day analogues; RSL [relative sea level] then rose ∼0.6 m in less than a century, allowing the coral to grow upward to 1.2 m higher than modern living corals.”

During The Early Holocene, Sea Levels Rose At Rates 5 – 6 Times Higher Than Today

“Only Suriname and Guyana [Caribbean] exhibited higher RSL [relative sea level] than present (82% probability), reaching a maximum height of ∼1 m [above present] at 5.2 ka [5,200 years ago].”