Browse: Home / 2017 / March / 27 / 20+ Scientists: ‘No Continent-Scale Warming Of Antarctic Temperature Is Evident In The Last Century’

No Warming Trend In Antarctica 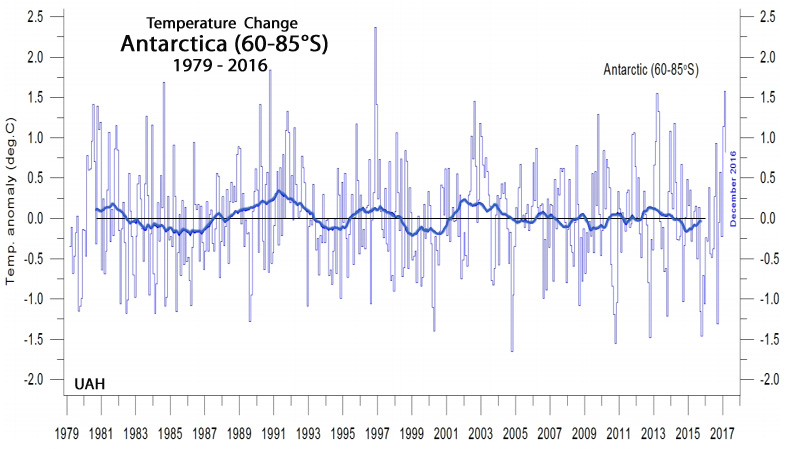 For several decades now, Antarctica has not been cooperating with the “global” warming narrative, as the continent as a whole has not been warming.

Several scientific papers have been published recently that document the lack of an anthropogenic warming signal for the Antarctic continent or the surrounding ocean, as well as the dominance of natural variability.

Smith and Polvani (2016) concluded that warming of West Antarctica or the Antarctic Peninsula are predominantly natural.

“The annual mean temperature has decreased at a statistically significant rate, with the most rapid cooling during the Austral summer.”

Jones et al. (2016) concluded that (a) there has been no overall warming trend for large portions of the continent in the past few hundred years, (b) the Southern Ocean has been cooling since 1979, and that (c), because of the cooling ocean, sea ice extent has been advancing.  In other words, climate models that assume humans drive Antarctic climate are “not compatible with the observed trends.”

“Most observed trends [over the 36-year satellite data] are not unusual when compared with Antarctic palaeoclimate records of the past two centuries.  … [C]limate model simulations that include anthropogenic forcing are not compatible with the observed trends. This suggests that natural variability overwhelms the forced response in the observations“ 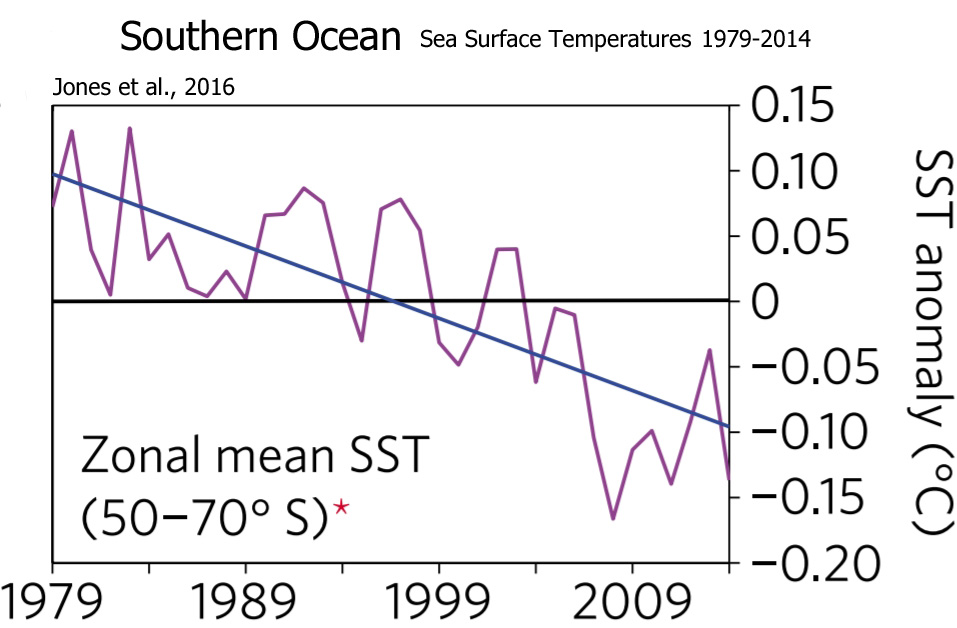 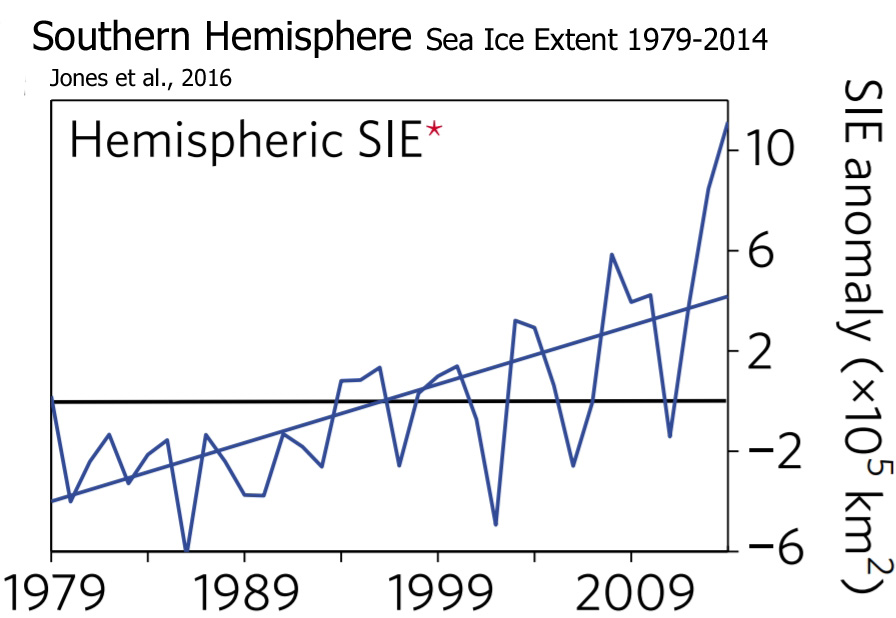 Scientific documentation of the dominance of natural variability — and a glaring lack of an anthropogenic forcing signal for Antarctica — continues in 2017.

The PAGES 2k reconstruction crew has just published a comprehensive analysis of the surface temperature trends for the entire continent of Antarctica.  The results do not advance the “global” warming narrative.  Instead, over 20 contributing scientists find that modern Antarctic temperatures are still much colder than they were during first millennium, and the long-term cooling trend has not been reversed on a continent-wide scale even with the onset of an assumed anthropogenic influence within the last century.

In other words, natural variability is the dominant factor influencing the Antarctic climate, not anthropogenic CO2 emissions.

“Our new continental scale reconstructions, based on the extended database, corroborates previously published findings for Antarctica from the PAGES2k Consortium (2013): (1) Temperatures over the Antarctic continent show an overall cooling trend during the period from 0 to 1900 CE, which appears strongest in West Antarctica, and (2) no continent-scale warming of Antarctic temperature is evident in the last century.” 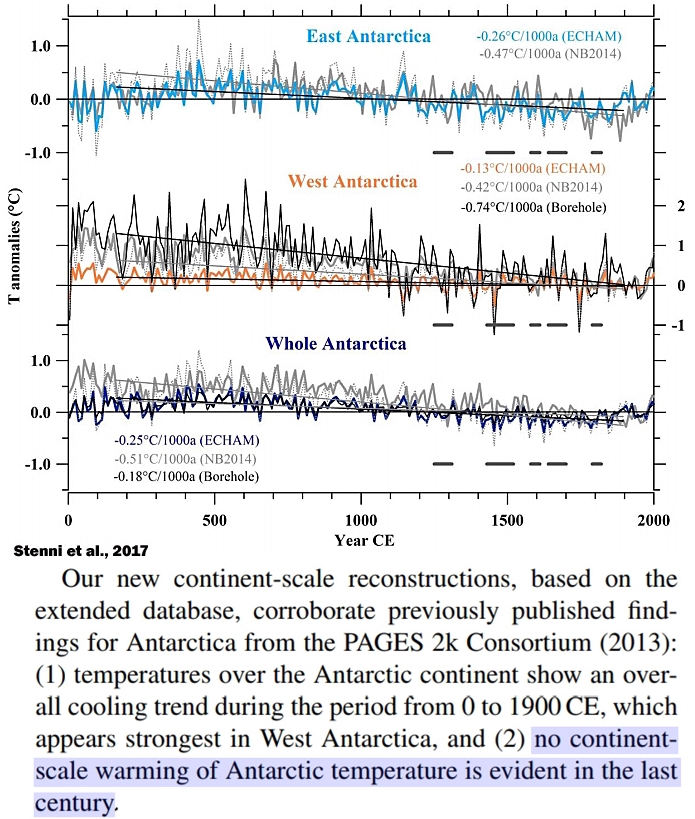 “A recent effort to characterize Antarctic and sub-Antarctic climate variability during the last 200 years also concluded that most of the trends observed since satellite climate monitoring began in 1979 CE cannot yet be distinguished from natural (unforced) climate variability (Jones et al., 2016), and are of the opposite sign [cooling] to those produced by most forced climate model simulations over the same post-1979 CE interval.”

“While changes in the SAM have been related to the human influence on stratospheric ozone and greenhouse gases (Thompson et al., 2011), major gaps remain in identifying the drivers of multi-centennial Antarctic climate variability. For instance, the influence of solar and volcanic forcing on Antarctic climate variability remains unclear. This is due to both the lack of observations and to the lack of confidence in climate model skill for the Antarctic region (Flato et al., 2013).”

“Only for the Antarctic Peninsula is this most recent century-scale trend unusual in the context of natural variability over the last 2000-years.”

Another new paper indicates that measured Antarctic temperatures during exploratory expeditions in 1911 and 1912 were “much warmer” than they have been at any time since 1957.  In fact, there have “never” been temperatures exceeding the early 20th century warmth of the recorded South Pole daily mean temperatures in the last 60 years.  The 1911/12 temperature anomalies reached “greater than 10°C” (as the enclosed graph below indicates).

“At their peak on 6 December 1911, the temperatures measured by Amundsen exceeded -16°C, which represents an anomaly relative to our estimate from ERA-Int climatology [long-term temperature and pressure record] of more than 10°C. … Amundsen’s sledging temperature measurements during this time are much warmer than the hourly and daily mean observations collected at the South Pole station since 1957, even when accounting for the average differences in temperature between Amundsen’s location and the South Pole, which is often colder than nearby areas due to pooling of cold air in the slightly lower elevation (Comiso 2000).”

“[D]aily maximum temperatures above -20°C occurred for two consecutive days in 2015 and 2012, but these are quite warm exceptions to the normal conditions. In contrast, Amundsen experienced four continuous days with daily mean temperatures exceeding -19.0°C and temperature anomalies from the ERA-Int climatology greater than 10°C [50°F].“ 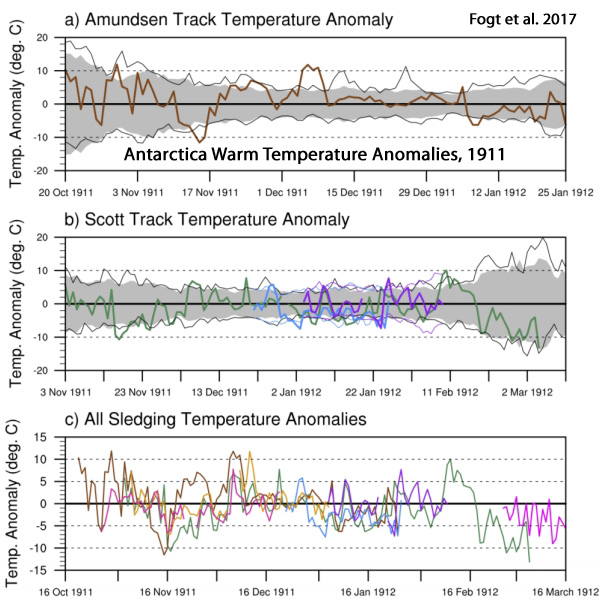 “When the daily mean temperature anomalies were the highest on February 9th and 10th 1912, more than 8°C and 10°C above the ERA-Int climatological average [long-term temperature record], respectively, Scott writes: ‘Very warm on march and we are all pretty tired. To-night it is wonderfully calm and warm, though it has been overcast all the afternoon’ (Huxley 1913, p.389).”

41 responses to “20+ Scientists: ‘No Continent-Scale Warming Of Antarctic Temperature Is Evident In The Last Century’”