Browse: Home / 2017 / July / 06 / Climate Activists Switch From Blaming Humans For Too Little And Now Too Much Rainfall…And Call It ‘Science’

In 2015, Humans Caused Drought, Too Little Rainfall In California

Humans to Blame for Catastrophic Drought in California, Scientists Say

“Scientists predict that “enhanced drought” will continue in California throughout this century because global warming has ‘substantially increased’ the likelihood of extreme droughts in the state.”

In 2017, Humans Causing Floods, Too Much Rainfall In California

Heavy California rains par for the course for climate change

Even the editor of the prominent scholarly journal Science has just claimed that the abundance of rainfall in California is now a trend brought on by human-caused climate change.  Since when is a 7-month precipitation record a trend?

“Episodes of severe weather in the United States, such as the present abundance of rainfall in California, are brandished as tangible evidence of the future costs of current climate trends.”

Attempting to clarify how humans are simultaneously responsible for too much and too little rainfall, Michael Mann explains why warming causes more intense rainfall and widespread drought at the same time, and how this is ironic but not a contradiction.

“With warming, water is cycling more vigorously through our atmosphere. As it turns out, that implies more frequent, very heavy rainfall events, more intense weather potentially as a result of this amplified hydrological cycle. And ironically – although the atmosphere can hold more water vapor and can therefore produce larger amounts of rainfall in a given event – it turns out that these events become less frequent and the warmer surface also causes more evaporation of water into the atmosphere, drying soil surfaces, drying land surfaces. So in this warmer climate with an amplified hydrological cycle we actually see increased rainfall, intense rainfall flooding. But we can also see more widespread drought over continental regions. It might seem like a contradiction, but in fact both predictions follow from the intensification of the hydrological cycle.”

It wasn’t all that long ago that journalists actually reported on climate change and weather events while considering a long-term context of natural variability rather than characterizing year-to-year weather change as unprecedented, the worst on record, and caused by humans.
.
For example, in 1992 the New York Times actually published an article indicating Medieval-era droughts were much more severe than now, lasting hundreds of years.   The modern period has been “relatively wet” compared to the past in that region.

“BEGINNING about 1,100 years ago, what is now California baked in two droughts, the first lasting 220 years and the second 140 years. Each was much more intense than the mere six-year dry spells that afflict modern California from time to time, new studies of past climates show. The findings suggest, in fact, that relatively wet periods like the 20th century have been the exception rather than the rule in California for at least the last 3,500 years, and that mega-droughts are likely to recur.”

“Dr. Scott Stine, a paleoclimatologist at California State University at Hayward, used radiocarbon dating techniques to determine the age of the trees’ outermost annual growth rings, thereby establishing the ends of drought periods. He then calculated the lengths of the preceding dry spells by counting the rings in each stump. This method identified droughts lasting from A.D. 892 to A.D. 1112 and from A.D. 1209 to A.D. 1350. Judging by how far the water levels dropped during these periods — as much as 50 feet in some cases — Dr. Stine concluded that the [Medieval-era] droughts were not only much longer, they were far more severe than either the drought of 1928 to 1934, California’s worst in modern times, or the more recent severe dry spell of 1987 to 1992.”

“Long-term trends in the temperature reconstruction are indicative of a 125-year periodicity that may be linked to solar activity as reflected in radiocarbon and auroral records. The results indicate that both the warm intervals during the Medieval Warm Epoch (A.D. 800 to 1200) and the cold intervals during the Little Ice Age (A.D. 1200 to 1900) are closely associated with the 125-year [solar activity] period.” 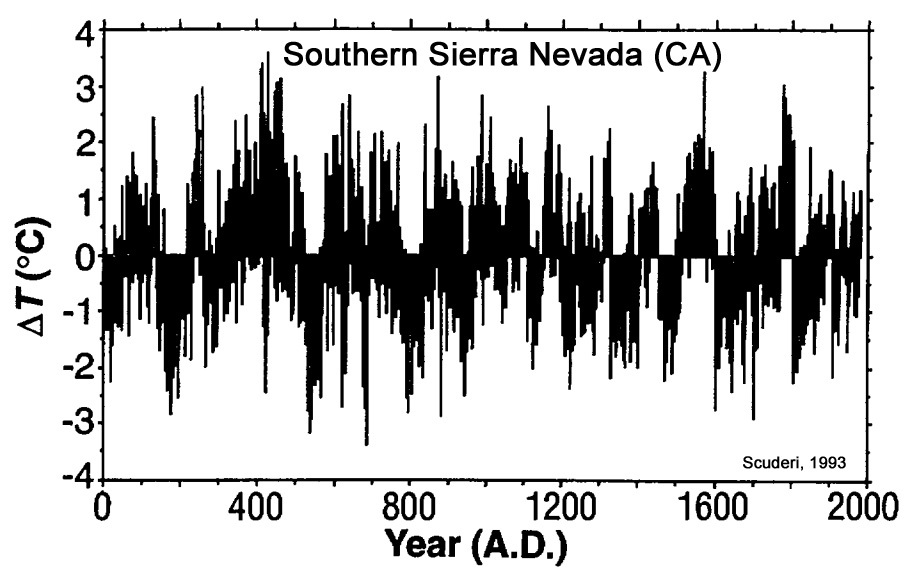 Medieval Drought Lasted Hundreds Of Years And Was Much More Severe 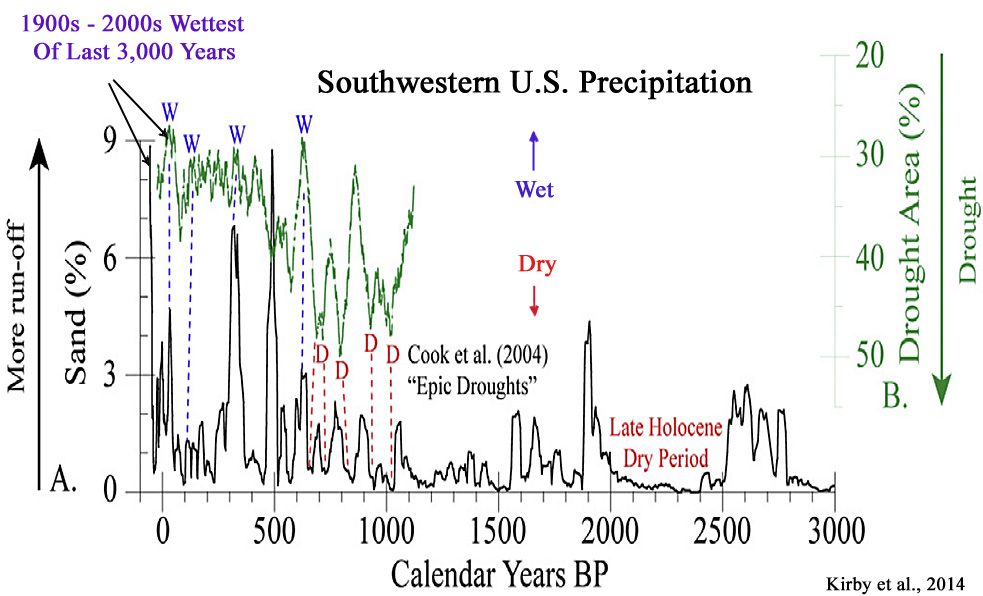 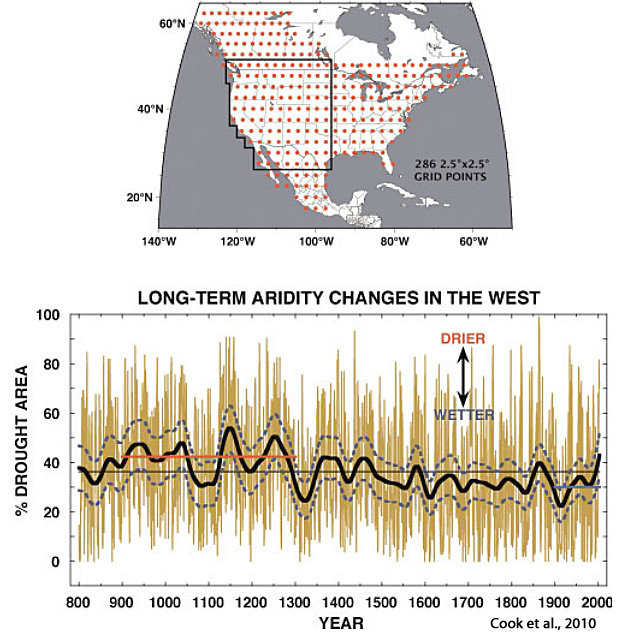 “Projected changes of a poleward extension of the subtropical dry zones simulated by climate models and the corresponding decrease of precipitation in the U.S. Southwest have not been found in observations to date because of the large natural climate variability.”

“The causes of the California drought during November to April winters of 2011/12 to 2013/14 are analyzed using observations and ensemble simulations with seven atmosphere models forced by observed SSTs. …[T]he precipitation deficit during the drought was dominated by natural variability, a conclusion framed by discussion of differences between observed and modeled tropical SST trends.”

“An analysis of the October 2013–September 2014 precipitation in the western United States and in particular over the California–Nevada region suggests this anomalously dry season, while extreme, is not unprecedented in comparison with the approximately 120-yr-long instrumental record of water year (WY; October–September) totals and in comparison with a 407-yr WY precipitation reconstruction dating back to 1571. Over this longer period, nine other years are known or estimated to have been nearly as dry or drier than WY 2014. The 3-yr deficit for WYs 2012–14, which in California exceeded the annual mean precipitation, is more extreme but also not unprecedented, occurring three other times over the past approximate 440 years in the reconstruction.”

“Tree-ring records show that the twentieth century has been moist from the perspective of the last millennium and free of long and severe droughts that were abundant in previous centuries.  The recent drought, forced by reduced precipitation and with reduced evaporation, has no signature of model-projected anthropogenic climate change.”

“Droughts have, for the most part, become shorter, less frequent, and cover a smaller portion of the country over the last century.”

“Megadroughts reconstructed over north-central Europe in the 11th and mid-15th centuries reinforce other evidence from North America and Asia that droughts were more severe, extensive, and prolonged over Northern Hemisphere land areas before the 20th century, with an inadequate understanding of their causes.”

“In this study, the nature and causes for observed regional precipitation trends during 1977–2006 are diagnosed. It is found that major features of regional trends in annual precipitation during 1977–2006 are consistent with an atmospheric response to observed sea surface temperature (SST) variability. This includes drying over the eastern Pacific Ocean that extends into western portions of the Americas related to a cooling of eastern Pacific SSTs, and broad increases in rainfall over the tropical Eastern Hemisphere, including a Sahelian rainfall recovery and increased wetness over the Indo–West Pacific related to North Atlantic and Indo–West Pacific ocean warming. It is further determined that these relationships between SST and rainfall change are generally not symptomatic of human-induced emissions of greenhouse gases (GHGs) and aerosols.”

Little change in global drought over the past 60 years

“Here we show that the previously reported increase in global drought is overestimated because the PDSI uses a simplified model of potential evaporation that responds only to changes in temperature and thus responds incorrectly to global warming in recent decades. More realistic calculations, based on the underlying physical principles that take into account changes in available energy, humidity and wind speed, suggest that there has been little change in drought over the past 60 years.”

“Recent drought in 1993–2008 was still within the frame of natural climate variability based on the 306 yr PDSI reconstruction.    The dry and wet phases of Lingkong Mountain were in accordance with changes in the summer Asian-Pacific oscillation and sunspot numbers, they also showed strong similarity to other tree-ring based moisture indexes in large areas in and around the CLP, indicating the moisture variability in the CLP [Chinese Loess Plateau] was almost synchronous and closely related with large-scale land–ocean–atmospheric circulation and solar activity.”

“Monthly precipitation (P) and potential evapotranspiration (PET) from the CRUTS3.1 data set are used to compute monthly P minus PET (PMPE) for the land areas of the globe. The percent of the global land area with annual sums of PMPE less than zero are used as an index of global drought (%drought) for 1901 through 2009. Results indicate that for the past century %drought has not changed, even though global PET and temperature (T) have increased.”

“Warming the troposphere enhances the cooling rate, thereby increasing precipitation, but this may be partly offset by a decrease in the efficiency of radiative cooling due to an increase in atmospheric CO2 (Allen and Ingram, 2002; Yang et al., 2003; Lambert et al., 2004; Sugi and Yoshimura, 2004). This suggests that global mean precipitation should respond more to changes in shortwave forcing than CO2 forcing, since shortwave forcings, such as volcanic aerosol, alter the temperature of the troposphere without affecting the efficiency of radiative cooling. This is consistent with a simulated decrease in precipitation following large volcanic eruptions [which cause cooling] (Robock and Liu, 1994; Broccoli et al., 2003), and may explain why anthropogenic influence has not been detected in measurements of global land mean precipitation (Ziegler et al., 2003; Gillett et al., 2004b), although Lambert et al. (2004) urge caution in applying the energy budget argument to land-only data.”