Between EVs And Petroleum Vehicles

According to a new paper published in the journal Issues in Science and Technology entitled “Electric Vehicles: Climate Saviors, Or Not?”, driving an electric vehicle (EV) rather than a conventional petroleum-powered vehicle effectively does nothing to reduce global-scale CO2 emissions.

Even in developing countries like Malaysia, EV use produces “substantial GHG emissions” because the electricity grid is “largely dependent on fossil fuels”.

Onn et al., 2017     EVs [electric vehicles] running with Malaysian electricity grid produce substantial GHG emissions. … [T]he benefits of grid-dependent EVs can only be harvested under the condition that their use is coupled with a low carbon electricity grid. Thus, it is an additional challenge for Malaysia’s that are largely dependent on fossil fuels for electricity generation. … Overall the GHG emissions produced through the usage of EVs are substantial based on the well-to-wheel analysis, as the environmental profile of EVs is linked with the national grid.

Alternatively, for countries that rely heavily on non-carbon sources like nuclear power or hydropower to electrify their grids (France, Norway), charging and driving EVs rather than petroleum-powered vehicles can significantly reduce CO2 emissions.

The problem for CO2 mitigation and EV advocates is that fossil fuel-powered electricity grids are far more prevalent across the world.  And this will continue to be the case as “1,600 coal plants are planned or under construction in 62 countries“, which will “expand the world’s coal-fired power capacity by 43 percent” (New York Times, July, 2017).

In Energiewende Germany, wind and solar were supposed to replace the country’s gradually phased-out nuclear power.  But because wind and solar are intermittent and thus unreliable energy sources (when the wind doesn’t blow or the Sun doesn’t shine), the electricity used to charge EVs has to substantially come from the steadily-available fossil fuels (coal, natural gas, oil), which provide over 80% of Germany’s energy consumption share.   Consequently, charging an EV in Germany doesn’t reduce CO2 emissions to any significant degree, with one new study (cited below) indicating that there is just an 8.7% difference in CO2 emissions between driving an EV in Germany and driving petroleum-powered commercial van in Germany (Ensslen et al., 2017).

As this graphical depiction shows, only one of the 5 countries (hydropower-reliant Norway) has achieved significantly lower CO2 emissions with EV use when compared to driving fossil fuel-powered vehicles.   China’s citizens – who almost doubled their EV ownership in one year (312,290 as of 2015, 300,000 more in 2016 alone) –  emit 711.88 gCO2/kWh by charging and driving their EVs using China’s fossil fuel-reliant electrical grid.  (711.88 gCO2/kWh is 27.3% greater than 559 gCO2/kWh.)  This means that purchasing and driving a petroleum-powered vehicle rather than an EV in China actually reduces CO2 emissions. 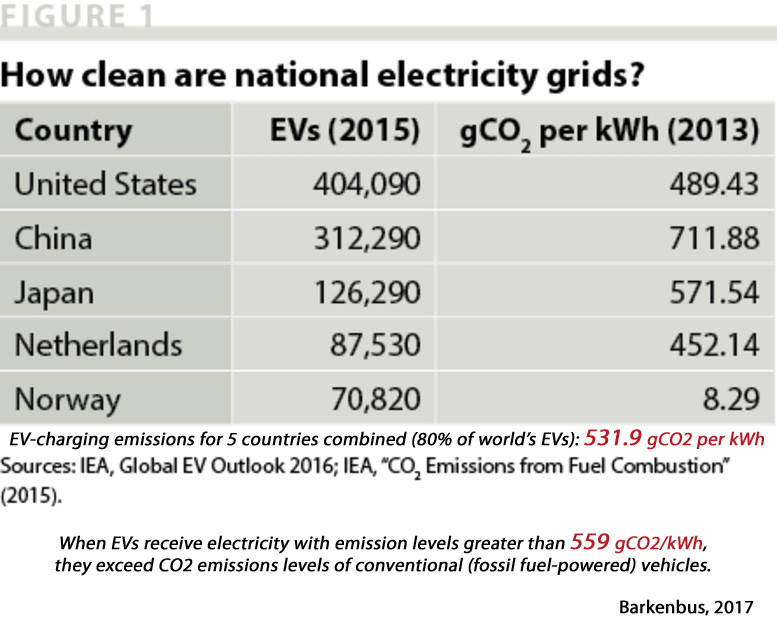 Had 2016 data been available for this analysis, China’s 300,000 additional EVs combined with its 711.88 gCO2/kWh emissions rate would have likely led to the conclusion that on a global scale, owning and driving an EV actually increases CO2 emissions more than owning and driving petroleum-powered vehicles do.

These analyses make it clear that the widespread introduction of EVs, by itself, is insufficient to lead to reduced carbon emissions from the transport sector. Electricity grids need to incorporate greater levels of clean, renewable energy. Equally important, and less understood, electricity providers must incentivize public recharging of EVs when renewable energy generation is at its peak.

The global inventory of operating EVs, as of the end of 2015, totaled just over 1.25 million. … [A]lthough the number seems large in isolation, it still represents a minuscule portion of the personal vehicle inventory, no more than 0.1% of all such vehicles. … Five countries (China, Japan, the Netherlands, Norway, and the United States) are home to about 1 million EVs, roughly 80% of the total. The United States is the largest home, with something more than 400,000 EVs. China, currently number two on the list of EV owners with more than 300,000 vehicles, will likely soon overtake the United States.

Knowing where these cars are helps calculate their impact on climate emissions. The IEA reports the carbon intensity of national grids in , which can then be used to gauge emission rates for that country’s EVs. The IEA has also calculated that when EVs receive electricity with emission levels exceeding 559 gCO2/kWh, they, unfortunately, are net contributors to climate change when compared with conventional vehicles.

At the international level, therefore, the evidence is mixed. In some cases, EVs reduce CO2emissions, and in other cases, they actually result in more carbon emissions than would conventional vehicles.

As mentioned above, because German energy consumption share is substantially derived from fossil fuel sources, driving an EV in Germany has almost no impact (an 8.7% difference) in reducing CO2 emissions relative to driving petroleum-powered vehicles.

Our results indicate that charging in France causes only about ten percent of the carbon dioxide emissions compared to Germany, where the carbon intensity is more diverse [due to heavy fossil fuel dependency backing up intermittent wind and solar supplies in Germany].

During the evaluation period of six months about 3.2 tons of CO2 were emitted. As the major part of the electricity generated in France is based on “carbon-free” nuclear power, specific PTW [plant-to-wheel] CO2 emissions are substantially lower for the EV (16.4 g CO2/km in France compared to 147.1 g CO2/km for Germany). 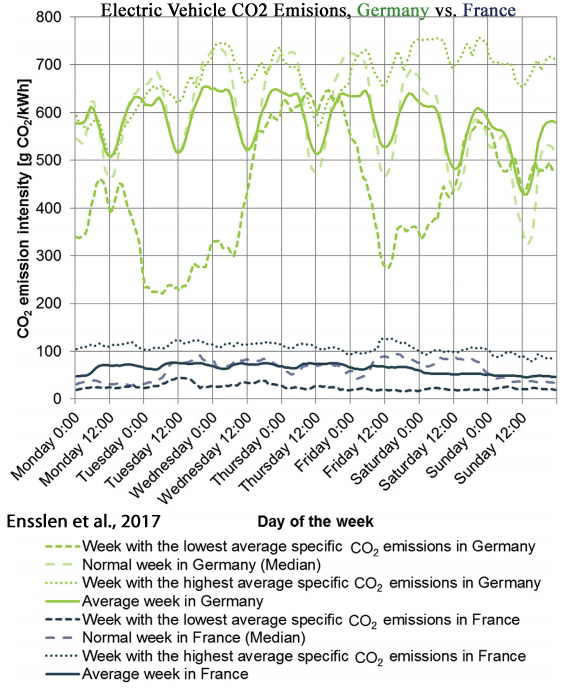 The calculated EV [electric vehicle] emissions based on the French and German energy mix reveal significant differences between the two countries. Therefore, different reduction potentials are derived from the comparisons to comparable ICEV [internal combustion engine vehicle].  Assuming that the project vehicles would only be charged in Germany results in average time-dependent PTW [plant-to-wheel] CO2 emissions of about 147.1 g CO2/km. This is about 36% above the CO2 emissions calculated based on the norm consumption of the EV…

Comparing CO2 emissions according to norm consumption of a conventional Nissan NV200 [a petrol-powered commercial van with low-average fuel efficiency] also having an identical chassis (128 g CO2/km) with the CO2 emissions calculated based on the norm energy consumption of the project EV (11 g CO2/km in France and 108 g CO2/km in Germany) leads to the conclusion that EV usage in France (Germany) is – with regard to CO2 – more environmentally friendly than usage of comparable ICEV [internal combustion engine vehicle].

CO2 emission reduction potentials in France (Germany) consequently amount to 91.4 [France]% (15.6% [Germany]). However, additional efficiency losses in the batteries and the AC/DC charging unit (charging efficiency) increases the amount of energy needed for charging. This consequently also increases CO2 emissions and results in reduction potentials compared to ICEV [internal combustion engine vehicle] of about 90.7% in France and 8.7% in Germany. 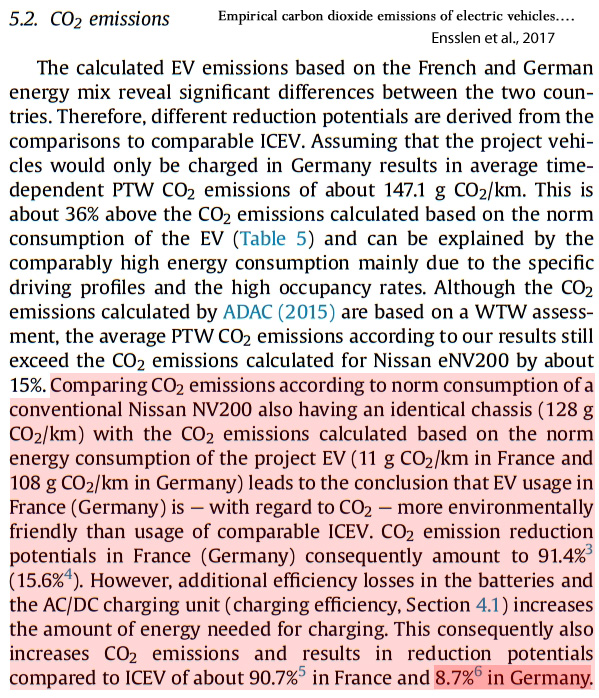 Our results implicate that CO2 emission reduction potentials of EV could be used by charging them during windy and sunny hours in Germany. … For commuters only commuting within Germany we recommend shifting the load into periods with high shares of renewables, i.e. particularly into afternoon hours, when the sun is shining, or into windy periods.

To summarize, then, owning and driving an EV currently does little to reduce CO2 emissions on a global scale.

More and more EVs are electrically charged in countries and regions that are heavily reliant on fossil fuels (i.e., 88% of China’s energy consumption  (2015) is derived from coal, oil and gas).

So why is it that advocates of CO2 emissions reductions are seemingly so disinterested in addressing the electricity grid issue while extolling the explosion of EV purchases and use?   Since CO2 emissions can actually increase when owning and driving EVs if the electricity that charges them is not sufficiently supplied by non-fossil fuel sources, why does this salient factor not resonate?

Or is the fervent push for EV ownership not really about CO2 emissions reductions after all?

89 responses to “New Study: Electric Vehicle Use Does Not Reduce CO2 Emissions”