Most Of Warming Trend Since 1980s

Is Naturally Driven, Not CO2-Driven 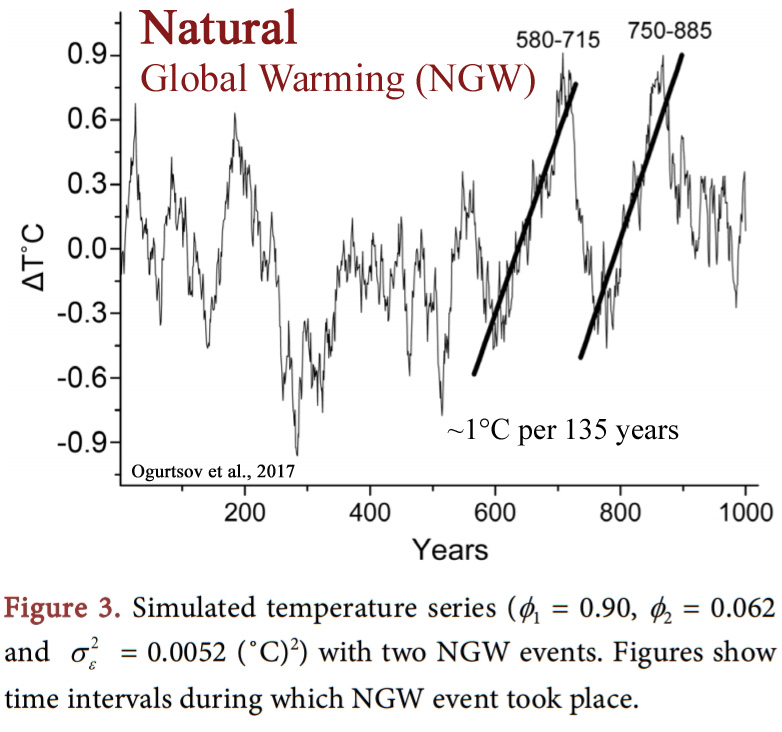 According to a new statistical analysis of centennial-scale surface temperature changes, half (0.5 °C) of the warming trend over the last 135 years (0.95 °C) can be explained by both (a) the existence of commonly-occurring natural (non-anthropogenic) variations of temperature that can reach the same amplitudes of the modern trend (see above image), and (b) external factors such as solar activity and greenhouse gases, with the latter factor accounting for “less than is commonly believed”.

Scientist Dr. Maxim Ogurtsov and his colleagues cite extensive evidence that any external forcing of the modern trend that falls outside the range of natural variability can be appreciably attributed to non-greenhouse factors. 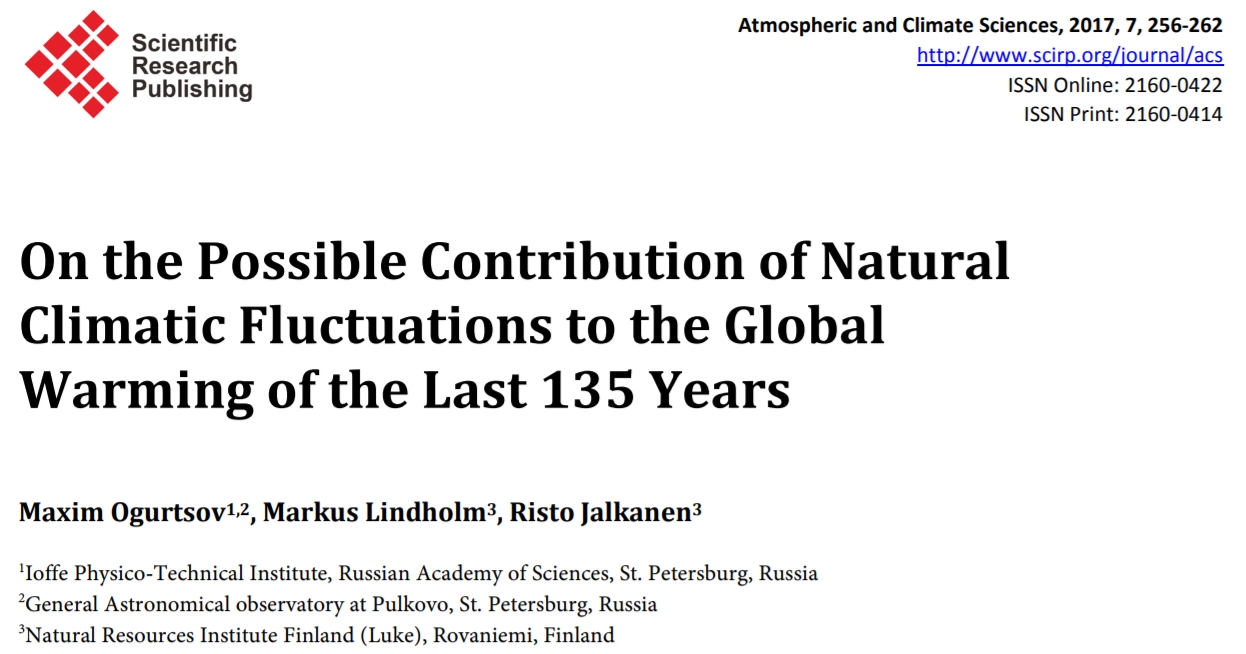 It is widely accepted also that this global warming is caused primarily by anthropogenic increase of greenhouse gases concentration . However debates on this question still continue.

Some experts maintain that current warming does not exceed the natural fluctuations of climate. Evidence of appreciable contribution to global warming of non-greenhouse factors has been obtained by many authors.

1.  Soon et al., 2015 noted that if the urbanization effect is properly taken into account, one can conclude that solar variability is the dominant factor of Northern Hemisphere long-term temperature changes since at least 1881.

2.  Zhao and Feng, 2014 reported that variations in solar activity play an important role in changes of climate over global scale during the last more than 100 years.

3.  According to Harde (2014), the Sun is the main contributor to global warming of the last century.

5.  Scafetta (2010) and Scafetta (2012) claimed that the global climate oscillations from 1950 to 2011 were appreciably influenced by astronomic planetary cycles, particularly by motion of Jupiter and Saturn.

6.  Swanson and Tsonis, 2009 noted that in the period 1900-2000 Northern Hemisphere climate variability might be partly explained by chaotic dynamics.

7.  Privalsky and Fortus (2011) modeled variations of global temperature during 1850- 2009 as an autoregressive process of the fourth order. They arrived at a conclusion that global warming of the last 150 years could be fully explained by natural climatic variability without any external forcing.

[I]t is reasonable to regard the global warming as a phenomenon exceptional from the point of view of intrinsic climatic oscillations, which need an additional external forcing factor for explanation. On the other hand, the statistical experiments showed that an appreciable part of the global warming might be a result of natural fluctuations of climatic system. … [O]ur results show that the contribution of these external factors (including greenhouse effect) to the global warming could be less than is often believed.

Changes in the solar radiation at the Earth’s surface (global brightening) might be important source of the warming of the last decades (Ogurtsov et al., 2012).

As noted in their conclusion above, Ogurtsov and colleagues have previously published a paper that establishes surface incident solar radiation (SSR) – solar radiation absorbed (or not) by the Earth’s surface (oceans) via decadal-scale reductions (or increases) in cloud cover – can account for all of the radiative forcing of temperature changes during the 1983 to 2001 period, when surface temperatures increased by about 0.5 °C.   In fact, the intensity of the direct, shortwave forcing during that 18-year period – 3 W m–2 to 6-7 W m–2 – was larger than the resulting temperature change itself.

Changes in the climate of the Earth depend evidently on the background solar irradiance, i.e. on the amount of shortwave solar radiation incoming into the atmosphere and the fraction of this radiation, which is reflected back to the space. Recent evidence show that solar radiation incident at the Earth’s surface has increased appreciably in the end of 20th century (Pallé et al, 2006). The phenomenon is often called a global brightening. 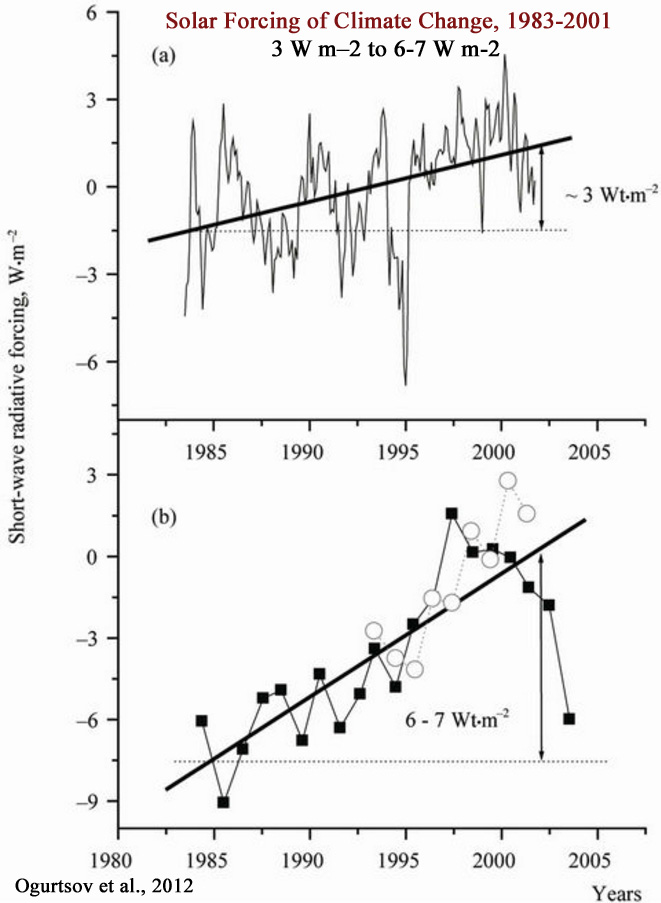 According to climate models, the total climate forcing effect of the roughly 120 parts per million (ppm) increase in atmospheric CO2 during the ~165 years since 1750 is 1.8 W m–2. 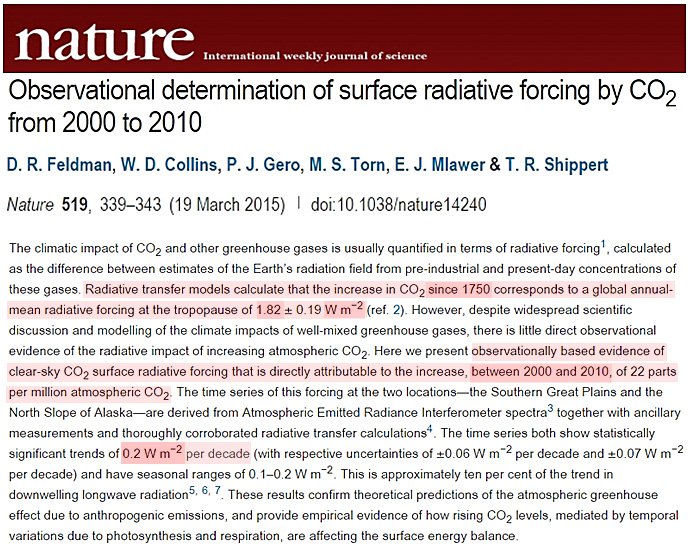 So if CO2 forcing accounts for roughly 0.2 W m–2 per decade of the globe’s radiative forcing with an increase of 22 parts per million (ppm), and if surface incident solar radiation (SSR) accounts for 3 to 6-7 W m–2 for the 18-year period (~2.5 W m–2 per decade)between 1983 and 2001, it could be reasonably concluded that surface incident solar radiation could account for at least 10 times more of the modern climate forcing as CO2 increases have.  Graphed, the difference in trends may look like this: 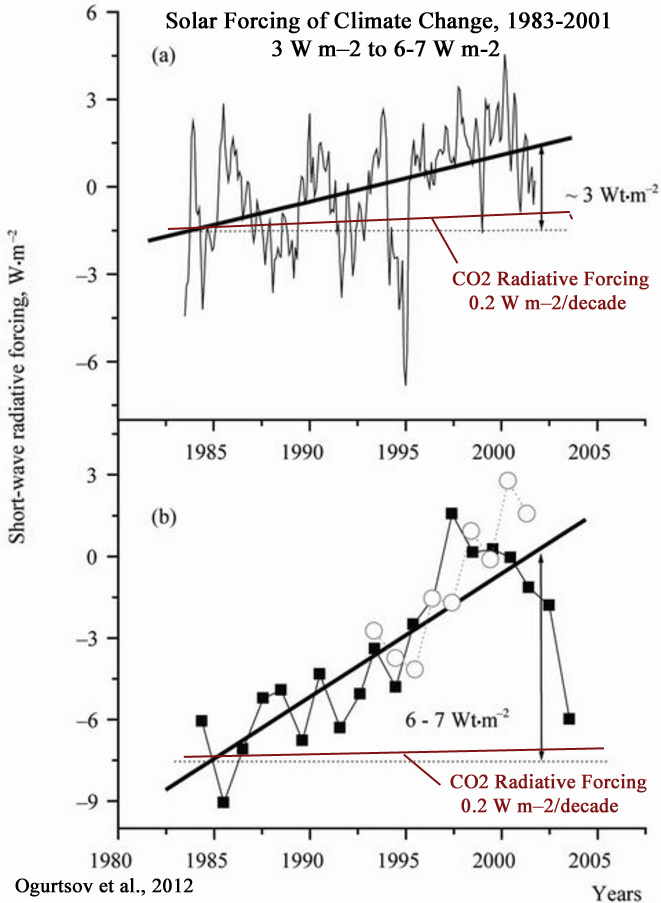 In sum, not only is the variation in temperature of the last 135 years not remarkable or outside the range of what can be achieved naturally or internally, but the magnitude of the external forcing from surface incident solar radiation for recent decades far exceeds the reputed attribution from CO2 concentration changes.   Therefore, it could reasonably be said that there is no clear anthropogenic signal detectable in the climate changes of the last 135 years when one considers the contexts of natural variation and natural climate forcing.

The decrease in the Earth’s reflectance from 1984 to 2000 […] translates into a Bond albedo decrease of 0.02 (out of the nominal value of about 0.30) or an additional global shortwave forcing of 6.8 Wm2. To put that in perspective, the latest IPCC report (IPCC, 2001) argues for a 2.4 Wm2 increase in CO2 longwave forcing since 1850. The temporal variations in the albedo are closely associated with changes in the cloud cover.

Conclusion: In this paper we have reviewed the physical mechanisms behind solar irradiance variation, and we have reviewed how on the timescale of solar evolution, the Sun cannot have been any dimmer than it is at the most recent activity minima. We have also shown how concurrent changes in the Earth’s reflectance can produce a much larger climate impact over relatively short time scales. Thus, a possible Sun–albedo link, would have the potential to produce large climate effects without the need for significant excursions in solar irradiance. These could provide an explanation for the apparently large climate response to apparently small solar changes, as well as how the 11/22 year solar cycle is imprinted on Earth. Regardless of its possible solar ties, we have seen how the Earth’s large scale reflectance—and the short wavelength part of the Earth’s radiation budget—is a much more variable climate parameter than previously thought and, thus, deserves to be studied in as much detail as changes in the Sun’s output or changes in the Earth’s atmospheric infrared emission produced by anthropogenic greenhouse gases.

Downward surface solar radiation (SSR) is a critical part of the Global Energy Balance and the climate system … Pinker et al. (2005) used a different product (2.5° resolution) and found that the derived global mean SSR series underwent a significant increase of 1.6 W m−2 per decade from 1983 to 2001. … On the other hand, Hatzianastassiou et al. (2005) derived a SSR product from 1984 to 2000 (2.5° resolution) and reported a significant increase of +2.4 W m−2 per decade in the global mean series, which is considerably higher than the results from Pinker et al. (2005) and Hinkelman et al. (2009).

Global [surface solar] radiation has an overall positive, and significant, trend [1983-2010] over the Meteosat disk which is mainly due to a negative trend in the effective cloud albedo, i.e., a decrease in cloudiness. Trends due to changes in the clear sky radiation are small and only induced by trends in the water vapor fields. Trends caused by changes in the direct effects of atmospheric aerosol are not represented because an aerosol climatology is used.

All considered regions show positive trends for the extended CM SAF surface radiation dataset pointing to an increase in solar surface radiation and, thus, a brightening by either a decrease in cloudiness or a decreased atmospheric absorption of solar radiation. However, the extent and also the significance of the trends in the different regions vary substantially. The trend for Europe of 4.35 W m− 2 dec− 1 is in the order of trends derived from surface measurements by Wild (2012) of 2 W m− 2 / dec− 1 for the 1980s to 2000 and 3 W m− 2 / dec− 1 after 2000.

The changes in both satellite derived and measured surface insolation data are also in line with changes in global cloudiness provided by the International Satellite Cloud Climatology Project (ISCCP), which show an increase until the late 1980s and a decrease thereafter, on the order of 5% from the late 1980s to 2002. A recent reconstruction of planetary albedo based on the earthshine method, which also depends on ISCCP cloud data, reports a similar decrease during the 1990s. Over the period covered so far by BSRN (1992 to 2001), the decrease in earth reflectance corresponds to an increase of 6 W m-2 in absorbed solar radiation by the globe. The overall change observed at the BSRN sites, estimated as an average of the slopes at the sites in Fig. 2A, is 0.66 W m-2 per year (6.6 W m-2 over the entire BSRN period).

At 36 locations worldwide, we estimate the cloud radiative effect (CREatm) on atmospheric solar absorption (ASRatm) by combining ground-based measurements of surface solar radiation (SSR) with collocated satellite-derived surface albedo and top-of-atmosphere net irradiance under both all-sky and clear-sky conditions. To derive continuous clear-sky SSR from Baseline Surface Radiation Network (BSRN) in-situ measurements of global and diffuse SSR, we make use of the Long and Ackerman (2000) algorithm that identifies clear-sky measurements and empirically fits diurnal clear-sky irradiance functions using the cosine of the solar zenith angle as the independent variable. The 11-year average (2000-2010) CREatm (all-sky minus clear-sky) is overall positive at around +11 Wm-2 using direct measurements form ground and space, and at 4 Wm−2 in the CERES EBAF dataset. This discrepancy arises from a potential overestimation in clear-sky absorption by the satellite product or underestimation by the combined BSRN/CERES dataset. The forcing ratio R shows that clouds enhance ASRatm most distinctly at desert-like locations that overall experience little occurrence of clouds. This relationship is captured by both the combined dataset and CERES EBAF.

The author associates the recently observed climate warming and carbon dioxide concentration growth in the lower atmospheric layers with variations of solar-geomagnetic activity in global cloud formation and the significant decrease in the role of forests in carbon dioxide accumulation in the process of photosynthesis. The contribution of the greenhouse effect of carbon-containing gases to global warming turns out to be insignificant.

It is widely assumed that variations in Earth’s radiative energy budget at large time and space scales are small. We present new evidence from a compilation of over two decades of accurate satellite data that the top-of-atmosphere (TOA) tropical radiative energy budget is much more dynamic and variable than previously thought. Results indicate that the radiation budget changes are caused by changes in tropical mean cloudiness. The results of several current climate model simulations fail to predict this large observed variation in tropical energy budget. The missing variability in the models highlights the critical need to improve cloud modeling in the tropics so that prediction of tropical climate on interannual and decadal time scales can be improved.

The global millennial temperature rising trend seen in Figure 11 from 1984 to the peak and trend inversion point in the Hadcrut3 data at 2003/4 is the inverse correlative of the Tropical Cloud Cover fall from 1984 to the Millennial trend change at 2002. The lags in these trends from the solar activity peak at 1991 (Figure 10) are 12 and 11 years, respectively. These correlations suggest possible teleconnections between the GCR flux, clouds, and global temperatures. 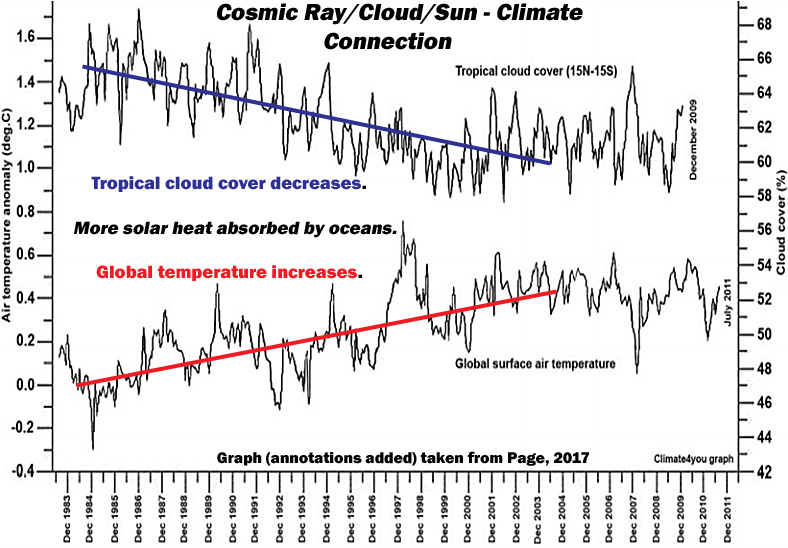