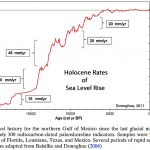 Share this… Facebook TwitterNew Paper: Modern Sea Levels Rising   20-30 Times Slower Than The Past Currently, sea levels are “believed to be” rising at a rate of 1.7-1.8 millimeters/year. This modern rate  –  just 0.17-0.18 of a meter per century – has remained relatively unchanged from the overall 20th century average, and there has been no statistically […]