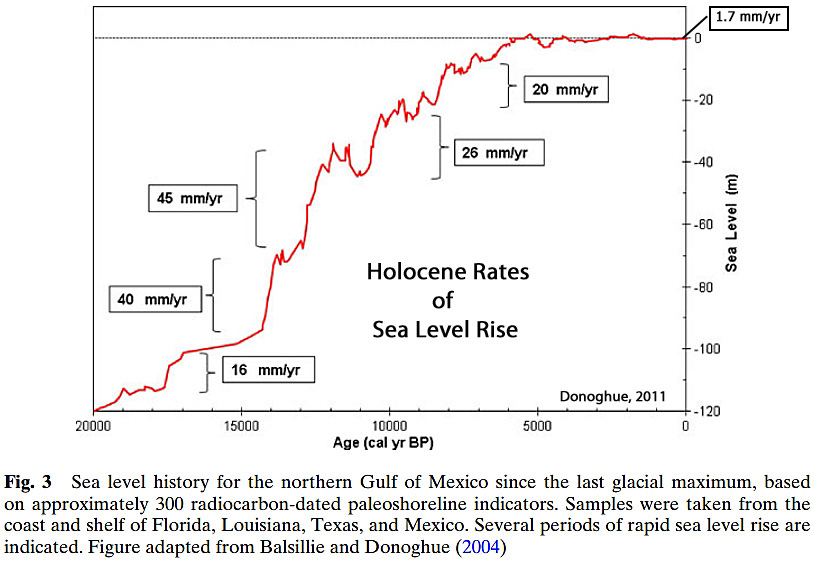 Currently, sea levels are “believed to be” rising at a rate of 1.7-1.8 millimeters/year.

This modern rate  –  just 0.17-0.18 of a meter per century – has remained relatively unchanged from the overall 20th century average, and there has been no statistically significant acceleration in the sea level rise rate (just 0.0042 mm/yr-²) since 1900.

In a new paper just published in the journal Climate of the Past, 7 scientists detail the long-term context for the modern rates of sea level rise.  Between 16,500 years ago and 8,200 years ago, the average rate of global sea level rise was 1.2 meters per century (12 mm/yr), which is about 700% faster than the rate achieved during the last 115 years. … Included in that rate average is the “meltwater pulse” epoch around 14,500 years ago, when sea levels rose at rates of 4 meters per century (40 mm/yr).

Other scientists recently suggested that hemispheric-scale sea levels rose by 12 to 22 meters in just 340 years 14,500 years ago, which is 3.5 to 6.5 meters per century.  This explosive sea level rise coincided with a Northern Hemisphere-wide warming event of 4 to 5 °C within a span of a few decades, but it did not coincide with a change in CO2 levels.

J.F. Donoghue (2011) puts the historical magnitude of the “more than 20 times that of today” sea level rise rates into perspective.  Shorelines would have necessarily retreated by as much as 40 meters per year – 75 centimeters per week – during those centuries of obscene sea level rise.

Furthermore, Donoghue specifies that during the last 20,000 years, the overall average sea level rise has been 6 mm/yr, which is more than 3 times the rate of the last century.   In other words, modern rates of sea level rise have significantly decelerated compared to the overall long-term trend.

Donoghue, 2011     “For much of the period since the last glacial maximum (LGM), 20,000 years ago, the region has seen rates of sea level rise far in excess of those experienced during the period represented by long-term tide gauges. The regional tide gauge record reveals that sea level has been rising at about 2 mm/year for the past century, while the average rate of rise since the LGM has been 6 mm/year, with some periods of abrupt rise exceeding 40 mm/year [4 meters per century].”

“Sea level has at times risen at rates more than 20 times that of today, more than 40 mm/year. At such rates, the regional shorelines would have retreated by as much as 40 m/year, or more than 75 cm/week.”

UK geologist Dominic Hodgson and colleagues have determined that sea levels rose at rates of 1.2 to 4.8 meters per century near East Antarctica about 10,000 years ago, when sea levels were 8 meters higher than they are now.

Hodgson et al., 2016     Rapid early Holocene sea-level rise in Prydz Bay, East Antarctica … The field data show rapid increases in rates of relative sea level rise of 12–48 mm/yr between 10,473 (or 9678) and 9411 cal yr BP in the Vestfold Hills and of 8.8 mm/yr between 8882 and 8563 cal yr BP in the Larsemann Hills. … The geological data imply a regional RSL [relative sea level] high stand of c. 8 m [above present levels], which persisted between 9411 cal yr BP and 7564 cal yr BP, and was followed by a period when deglacial sea-level rise was almost exactly cancelled out by local rebound.

And Zecchin et al. (2015) have suggested that “episodic” and “rapid” sea  level rises could reach 6 meters per century (60 mm/yr) for hundreds of years at a time.   That’s about 35 times the current rate.

Zecchin et al., 2015     “The evidence presented here confirms drowned shorelines documented elsewhere at similar water depths and shows that melt-water pulses have punctuated the post-glacial relative sea-level rise with rates up to 60 mm/yr. [6 meters per century] for a few centuries.”

In sum, there has been nothing unusual about the modern rates of sea level rise over the last century.

The continuance of this long-term deceleration during an era of allegedly significant anthropogenic climate influence strongly suggests that abrupt sea level rise (and fall) occurs independently of the variations in the atmospheric CO2 concentration.