UPDATE 1: Levi Cowan of Tropical Tidbits reports at Twitter that the forecast path has shifted westward, something he calls “some good news for the Miami area”. Let’s hope for more positive developments.

All the models agree that Irma will almost certainly hit Florida directly and that it would take a miracle to divert the storm away. It’s going to hit.

A number of factors could have prevented Irma from reaching the proportions and magnitudes that it has grown to, but unfortunately luck has played against Floridians and others in the region.

The steering troughs from the High out in the Atlantic and the Low plunging down across the southeast USA could have directed the storm out to sea, if only they had been positioned just a few dozen miles differently.

Shearing could have been stronger and weakened the storm, or the storm might yet track closer to Cuba, causing it to weaken some. But that is all not to be, and this time the die came up snake eyes. Instead, all factors unfolded in total favor of Irma in almost every way possible. The result: a very powerful hurricane, one we don’t see very often.

Levi Cowan at Tropical Tidbits here explained late Thursday evening the factors driving the storm, and the likely path in the days ahead. It really couldn’t be worse and more unfortunate.

The damage is going to be great. Hurricane conditions could extend up into southern Georgia. High winds and storm surges will be widespread along all coastlines on both sides of the Florida peninsula where many metropolitan areas happen to be sitting. 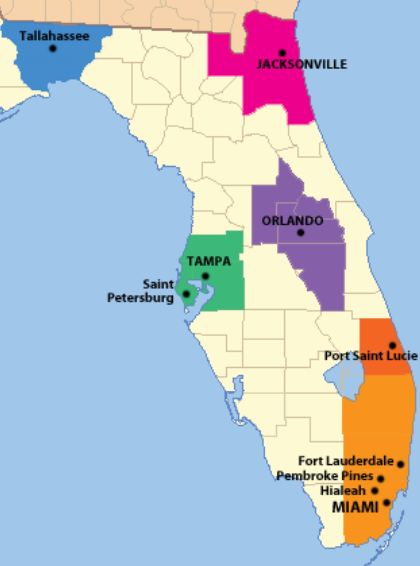 Map as per 2010 US Census showing cities with a population greater than 150,000, and their respective metro areas. Image by: Comayagua99 at English Wikipedia, CC BY-SA 3.0

Florida’s area is some 65,700 square miles and has a population of nearly 19 million, most of whom living in coastal areas. Property and infrastructure are naturally concentrated there and thus the state’s metropolitan areas will see tens of millions of dollars in damage per square mile, with some places possibly seeing damages in the hundreds of millions per square mile. Like Houston did.

Especially the areas along the coast, with their ports, harbors, high-rises, transportation facilities and extensive infrastructure, will see severe damage from high winds and storm surges. Rural areas of course will see less damage per square mile.

If half (conservative) of Florida’s area (32,000 sq mi) gets hit hard by surge and/or wind conditions with an average damage of $20 million per square mile (rough estimate), then we are looking at a potential of more than $600 billion in damage for Florida alone.

Now add the damage already done in the Caribbean, plus what will happen in Georgia and beyond. We are getting close to the astronomical sum of a trillion dollars.

There is still some time to get property out of harm’s way, but it’s just about run out. Residents need to focus on getting the hell out of the way and saving their lives.

Expect global warming alarmists to seize on the final damage tally, no matter what it turns out to be. They’ll be hysterical, and will irrationally demand that leaders implement multi-trillion dollar “climate protection” measures mostly aimed at reducing greenhouse gases, especially CO2 emissions from burning fossil fuels.

The problem with these measures, however, is that there is no evidence that they would have any impact on future hurricanes – none! Hurricanes have always occurred, and always will no matter how ecologically pious we may become.

In fact a look at the past shows that hurricane activity trends have been decreasing over the past 140 years while CO2 emissions rose: 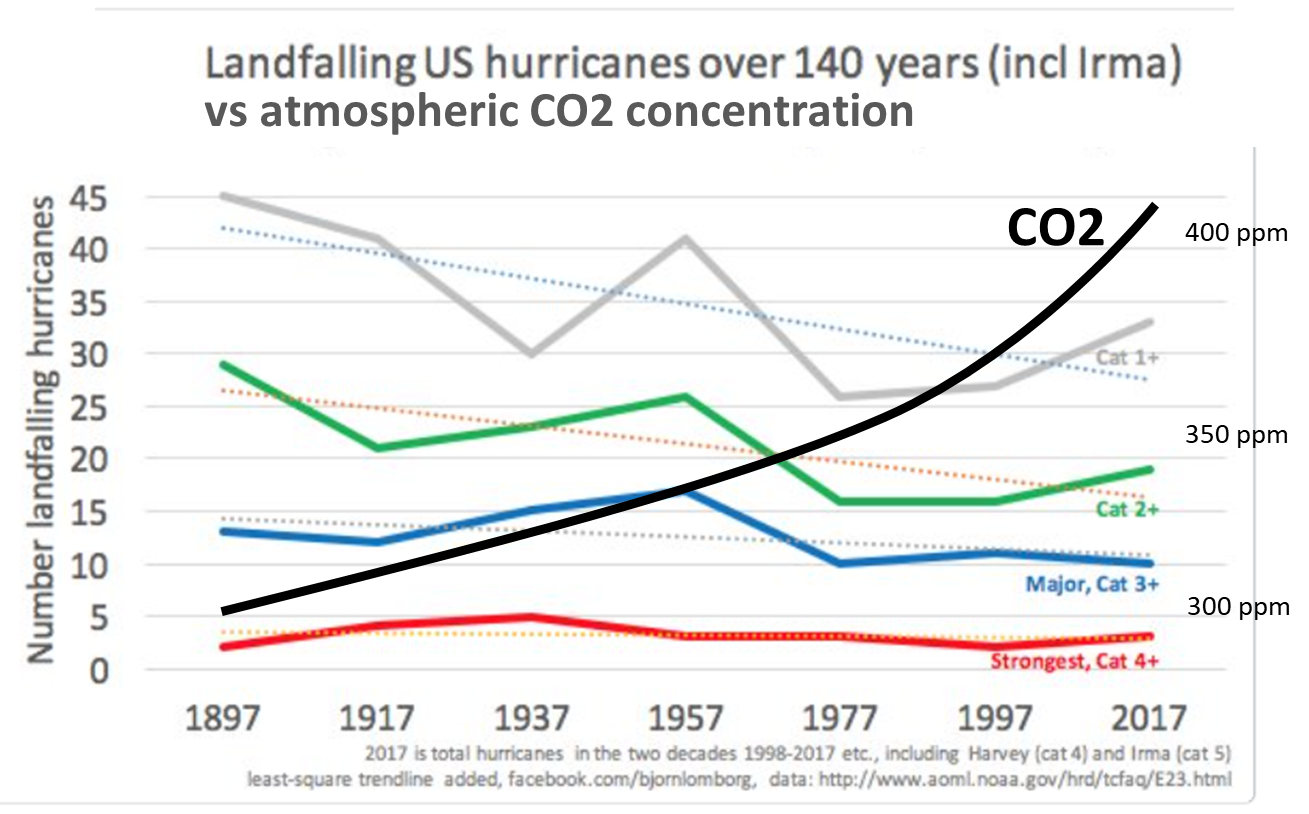 Hurricane activity has been falling over the past 140 years. CO2 curve added by NoTricksZone (not necessarily to scale).

If climate and hurricanes are indeed related to CO2, as alarmist and activist scientists insist, then the data are telling us to emit more and not less. Of course the CO2-hurricane-activity-relationship is silly, and is no solution.

Complacency after 12 years of low activity

The best advice here would be to invest the money into better infrastructure and more sensible urban planning. That lesson was learned long ago, but obviously got forgotten along the way.

Twelve years of no major hurricane strikes and decreasing activity likely led to just a little too much complacency.

17 responses to “Bad Luck: Monster Hurricane Irma Could Rack Up $1 Trillion In Damages!”