A former NOAA meteorologist and 40-year veteran of hurricane predictions believes Irma will continue to move move west toward Florida and reach near the southern tip of the Florida Peninsula around Sunday, September 11th, as a major category 4 hurricane. 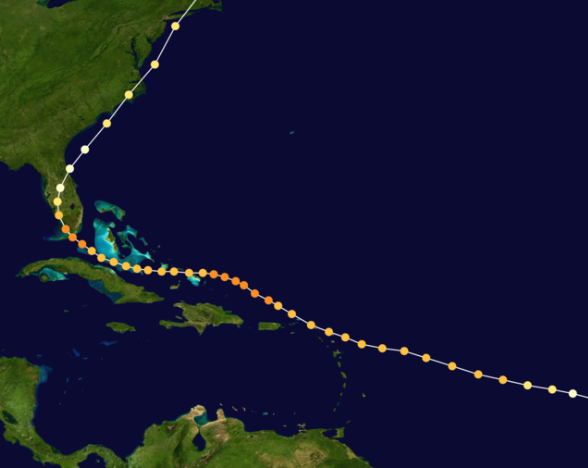 Both David Dilley of Global Weather Oscillations and the National Hurricane Center now believe Irma will make landfall near the southern tip of Florida, from near or just west of Miami to just west or near Jacksonville and then run up the coast into eastern Georgia.

Dilley adds: “It all depends on exactly when it makes the turn to the north – just 20 miles makes a big difference. Historical tracks favor a landfall near or south of Miami.”

Predictions based on natural cycles

Dilley had predicted a harsh hurricane season already back in early February, long before most forecasters were ready to go public with their forecasts.

In his February forecast, he predicted that the USA’s record 12-year run without a major hurricane hit would end in a big way.

He also predicted that the southern tip of Florida would be hit by a major hurricane, one that would move northward through the state after making landfall, and that this southern Florida zone overall would enter the strongest and most active hurricane cycle since the period from 1945 to 1950 (65 to 70 years ago).

Dilley wrote in an e-mail that during this 6-year active period, five out of the 6 years had hurricanes, and some years had multiple landfalls, adding:

So far his predictions for the current season have been impressively accurate. Dilley says he is tracking 4 historical analog years that are like the 2017 season, noting that hurricane patterns have a strong tendency to repeat in cycles.

He reminds us that three of the 6 landfalls from 1945 to 1950 were major hurricanes, with 2 of them being strong Category 4 hurricanes. There were also two category 3 hurricanes – and only one hurricane was a Category 1.

The analog years he used for forecasting the current season go back to 1910.

The bottom line, says Dilley: “This Southern Florida zone has entered the most active and dangerous cycle in 65 to 70 years. About 70% of the hurricanes that strike this zone are major hurricanes.” This year mostly likely will not be any luckier.

On what’s behind the hurricanes, the 40-year veteran does not believe it has anything to do with manmade global warming and higher atmospheric CO2 concentrations. According to Dilley: “I nailed it 8 months in advance and the likely Texas hurricane – all using natural cycles of the earth-moon-sun interactions – and No Global Warming.”

While most models predict little danger from now forming José, Dilley wrote that it will develop into a hurricane and that there’s a chance José “could pose a New England threat near the 21st“.

A New England hurricane hit was also among Dilley’s predictions from earlier this year.