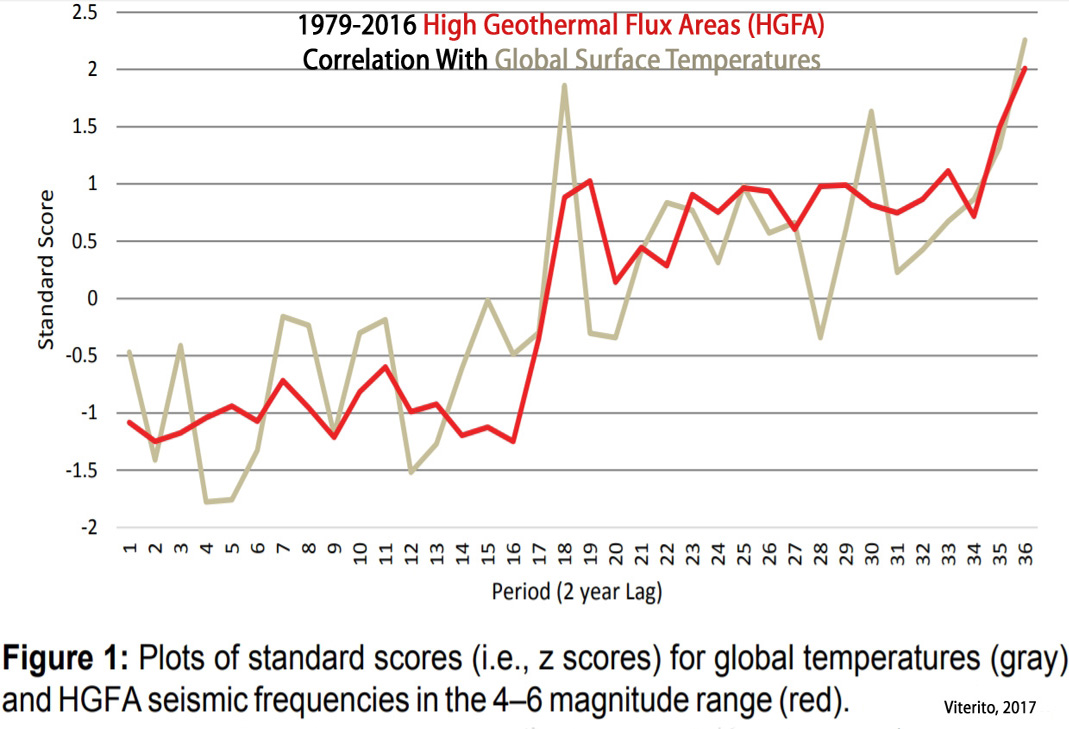 The HGFA/global temperature correlation has been found to be stronger than the correlation for CO2 concentration changes (r=0.74) for recent decades (1979-2016).

Other recent research has provided further support for the significant influence of seismic activity (i.e., there is a very high correlation [r=0.935] between geothermal flux and North Magnetic Dip Pole movement).

These robust and well-documented seismic activity associations have led Dr. Viterito to call for a reconsideration of the paradigm that says variations in atmospheric CO2 concentrations drive changes in global temperatures. 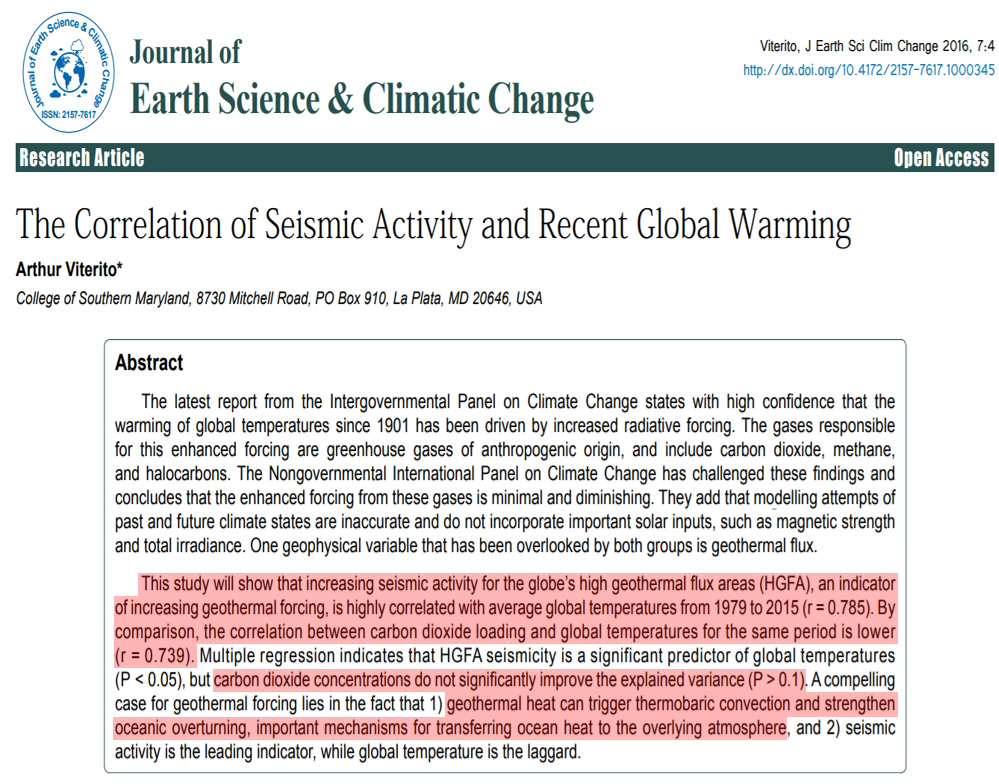 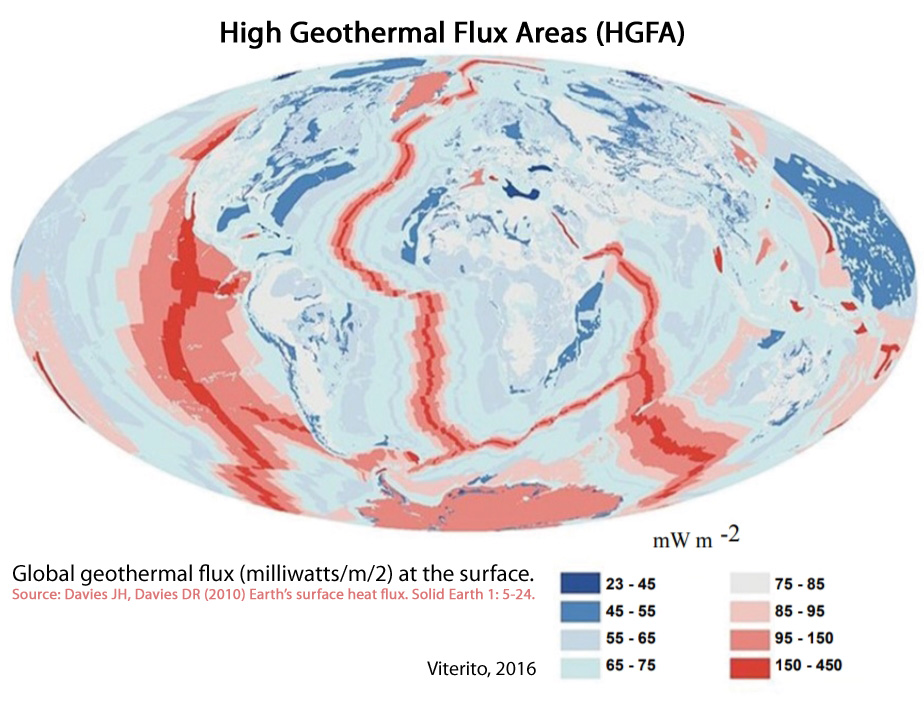 “The Correlation of Seismic Activity and Recent Global Warming (CSARGW) demonstrated that increasing seismic activity in the globe’s high geothermal flux areas (HGFA) is strongly correlated with global temperatures (r=0.785) from 1979-2015. The mechanism driving this correlation is amply documented and well understood by oceanographers and seismologists.”

“Namely, increased seismic activity in the HGFA (i.e., the mid-ocean’s spreading zones) serves as a proxy indicator of higher geothermal flux in these regions. The HGFA include the Mid-Atlantic Ridge, the East Pacific Rise, the West Chile Rise, the Ridges of the Indian Ocean, and the Ridges of the Antarctic/Southern Ocean. This additional mid-ocean heating causes an acceleration of oceanic overturning and thermobaric convection, resulting in higher ocean temperatures and greater heat transport into the Arctic. This manifests itself as an anomaly known as the “Arctic Amplification,” where the Arctic warms to a much greater degree than the rest of the globe.”

“As illustrated in CSARGW, jumps in HGFA seismic activity can amplify an El Niño event, a phenomenon referred to as a SIENA or a Seismically Induced El Niño Amplification.  Accurately predicting two of these amplified El Niños (i.e., the 2015/2016 event plus the1997/1998 episode) is an important outcome of the HGFA seismicity/temperature relationship.” 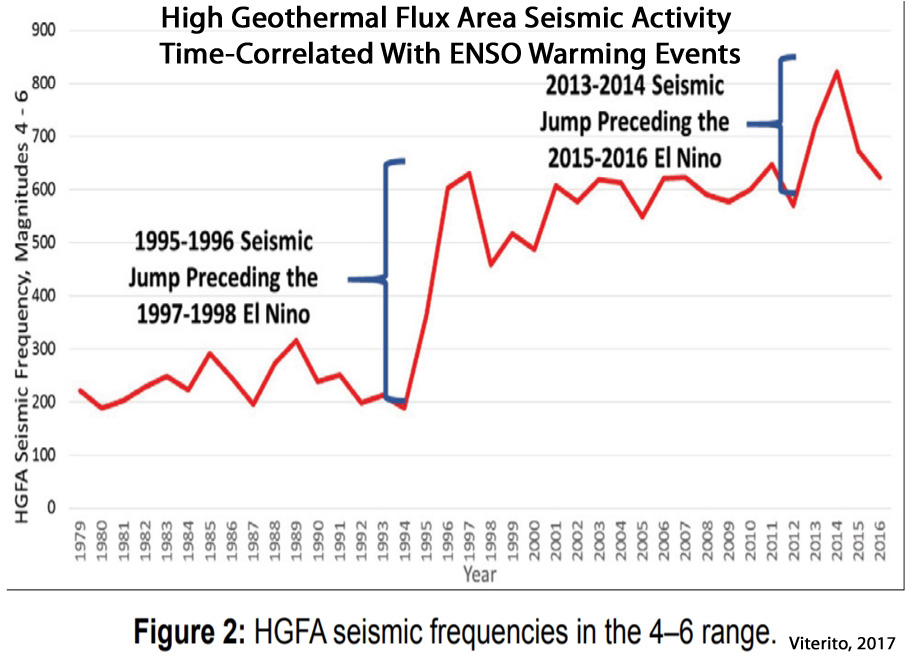 “Applying the same methodology employed in CSARGW, an updated analysis through 2016 adds new knowledge of this important relationship while strengthening support for that study’s conclusions. The correlation between HGFA seismic frequency and global temperatures moved higher with the addition of the 2016 data: the revised correlation now reads 0.814, up from 0.785 for the analysis through 2015. This yields a coefficient of determination of .662, indicating that HGFA [high geothermal flux area] seismicity accounts for roughly two-thirds of the variation in global temperatures since 1979.”

“[T]he idea that increased flux of oceanic geothermal heat (as indicated by increased seismic activity in these areas) can significantly alter temperature counters the hypothesis that increasing carbon dioxide has been the primary driver of recent global temperature change. Despite the general “non-acceptance” of this hypothesis, a recent study by Williams (2016) links a seemingly unrelated geophysical phenomenon to mid-ocean seismicity; thus a new paradigm may be emerging from this important association. Specifically, Williams shows that the speed at which the North Magnetic Dip Pole (NMDP) moves is highly correlated (r=0.935) with mid-ocean seismic activity.” 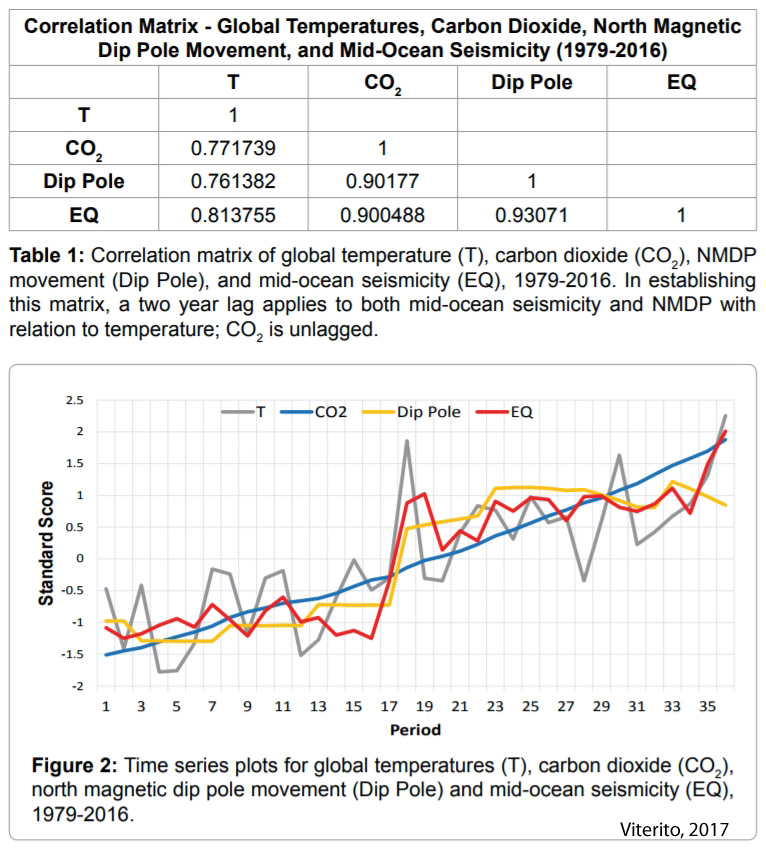 “However, CO2 concentrations, along with NMDP [North Magnetic Dip Pole] displacements, do not explain a significant percentage of the total variance (p>0.05) when they are included and must be dropped from the analysis. This high degree of multicollinearity is a prominent finding.”

“However, it is important to note that, despite high correlations, CO2 increases cannot be causing an intensification of mid-ocean seismic activity nor can higher CO2 concentrations be driving the acceleration of the NMDP [North Magnetic Dip Pole]. There is simply no plausible mechanism that can be invoked here.”

“Clearly, there is far more in play than is currently accounted for in our understanding of earth’s climate. The shifting of plates, along with the concurrent shifts of earth’s NMDP, should spur the geophysical community to create a new and enduring paradigm that links these phenomena to changing global temperatures.”