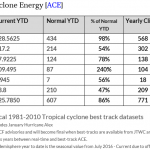 Media Baffled…”WHERE Have All The Cyclones Gone?”…Pacific Near “Quietest Season On Record”!

Share this…FacebookTwitterDr. Ryan Maue here reports at Twitter that although the Atlantic hurricane season “is going gangbusters“, the Pacific is in fact seeing “one of quietest Typhoon seasons on record“. Last month in the media, amid the aftermath of Harvey and Irma, the public heard a long stream of hysterical reports claiming that the tropical storms were sure […]