Inuit: Bears ‘Catch Seals Even If The Ice Is Really Thin’

Scientists: ‘Unlikely Polar Bears Are At Risk From AGW’ 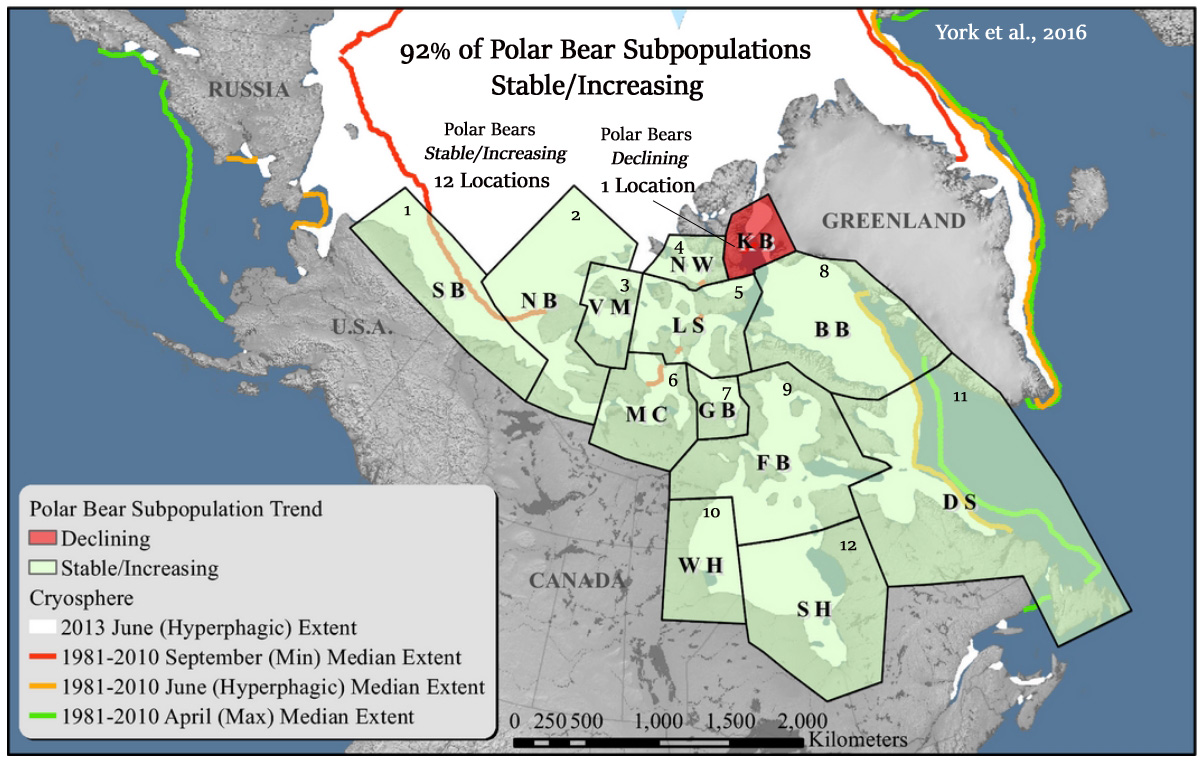 Most of the world’s polar bears live in Canada.  Hunters and elders from northern Canada’s native communities have been immersed in studying polar bear ecology for centuries.

In two new peer-reviewed papers published in the journals Ecology and Evolution and Polar Record, scientists record the observations and experiences of Canada’s polar bear “experts” — the community members who live side-by-side with these “sea bears” (Ursus maritimus).

According to scientists, no study has indicated that there is reason to presume that the perspectives of community observers are either suspect or incorrect.  In fact, there have been multiple occasions when traditional ecological knowledge gleaned from local populations accurately identified polar bear subpopulation trends before new scientific studies could be conducted to corroborate them (York et al., 2016).

The overwhelming conclusion from years of accumulated conversations with native populations about polar bears is that there is almost no connection between the long-term observations of polar bear ecology and the more recent claims that polar bears as a species are in grave danger due to climate change and thinning sea ice.

In fact, the long-term observations suggest that polar bear subpopulations are currently faring quite well, with 92% of  the subpopulations studied either remaining stable or growing in recent years.

According to Inuit observers, there may even be “too many” bears now.

Furthermore, the traditional ecological knowledge (TEK) gleaned from local populations affirms that polar bears do not need thickened sea ice to hunt seals, as they can “catch seals even if the ice is really thin” (Wong et al., 2017).

A bold conclusion from York et al. (2016) is that, given the paleoclimate record of much warmer (+4 to +7.5 °C) Arctic and much more reduced sea ice thickness and extent in the past relative to today, “it seems unlikely that polar bears (as a species) are at risk from anthropogenic global warming.”

1.  “We show that much of the scientific evidence indicating that some polar bear subpopulations are declining due to climate change-mediated sea ice reductions is likely flawed by poor mark–recapture (M-R) sampling and that the complex analysis models employed to overcome these capture issues apparently fail to provide accurate estimates of the demographic parameters used to determine subpopulation status.”

2.  “There is no trend evident from the summed subpopulation numbers from the PBSG status reports. Other indications of individual subpopulation decline are in conflict with aerial survey results, TEK [traditional ecological knowledge from native populations], or subject to sampling ambiguity, with the exception of the KB subpopulation.”

3.  “We hypothesize that when polar bear subpopulation trends are evaluated by both M-R sampling and TEK; notable differences are most likely due to errors in scientific methodology rather than mistaken TEK.”

4.  “We suggest that the difference between scientific and TEK in this case is partly caused by institutional (science establishment) reluctance to accept TEK as a valid test of correspondence between scientific predictions and observable reality (Aars et al. 2006; Resolution # 1-2005). … We did not find evidence for intentional misrepresentation of polar bear subpopulation numbers or trends from TEK, aboriginal organizations, or co-management wildlife boards. The TEK we report for Canadian polar bear subpopulation trends was a consensus from all of the sources cited above, which we believe to be a comprehensive list of available sources on the TEK for polar bear subpopulation trends.”

5.  “Scientific studies have not always agreed with TEK on subpopulation trend (e.g., NB, SB, SH, and WH), but these studies have never provided any reasons to suspect that the available TEK was suspect or incorrect. Alternatively, we are aware of multiple occasions when TEK accurately identified polar bear subpopulation trends before new scientific studies had been conducted that corroborated the TEK (S6).”

7.  “If polar bears have existed for the last 4 million years, they would have emerged during the mid-Pliocene approximately 1.25 million years before the onset of northern hemisphere glacial cycles (Bartoli et al. 2005). If polar bears emerged any time prior to or during the previous glacial cycle, they would have persisted through the Eemian interglacial period. During the Eemian interglacial, mean annual temperatures were 4°C warmer than the current interglacial (Holocene) for northern latitudes (Müller 2009), and some northern locations reached temperatures as high as ~7.5°C warmer than the mean temperature for the same area over the last thousand years (Dahl-Jensen et al. 2013).”

8.  “Given the persistence of polar bears through the current and previous interglacial periods, and their ability to accommodate extended retreats onshore and based on the empirical observations of climate and sea ice change (S7), it seems unlikely that polar bears (as a species) are at risk from anthropogenic global warming.”

9.  “Reduction in the heavy multiyear ice and increased productivity from a longer open water season may even enhance polar bear habitat in some areas (Stirling and Derocher 1993, 2012; Derocher et al. 2004; Rode et al. 2014).” 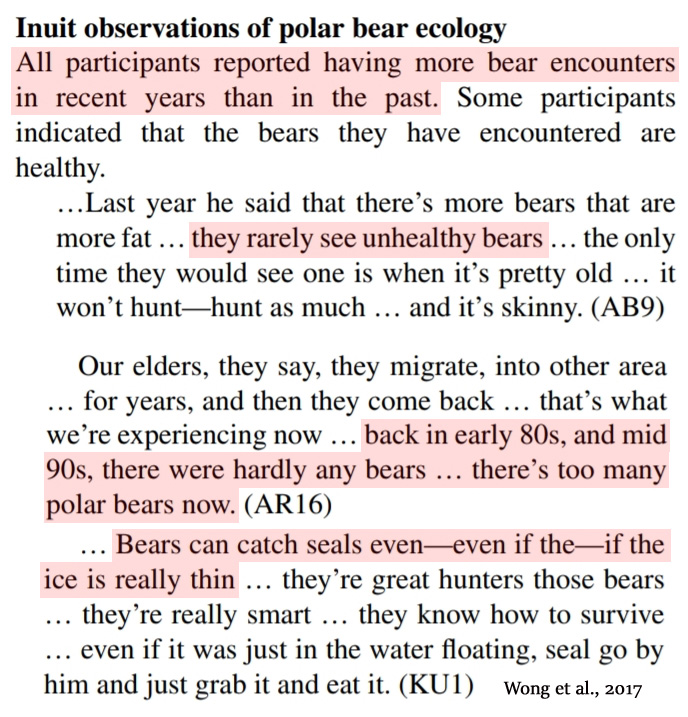 1. “From May 2011 to April 2014 over four visits, we conducted individual interviews with 23 hunters and 33 elders (48 men and eight women) comprising 32 active, 14 non-active and nine less experienced hunters.”

2. “Strong and transparent relationships between polar bear researchers and Inuit communities are necessary to overcome persisting research (and community) misconceptions.”

3. “In the past, academics have been criticised for prescribing expected research plans and outcomes in a rigid way, leading to condescending views of unfamiliar knowledge practices and unwelcoming interactions with community members (Grimwood and others 2012).  … For community members, most types of research have been viewed as inseparable from government agendas through funding and consulting programmes (Bocking 2007) and past histories and power relations have politicised views of scientific research as a whole (Reed and McIlveen 2006).”

4. “All [Inuit] participants reported having more bear encounters in recent years than in the past. Some participants indicated that the bears they have encountered are healthy.”

“Last year he said that there’s more bears that are more fat … they rarely see unhealthy bears … the only time they would see one is when it’s pretty old … it won’t hunt—hunt as much … and it’s skinny. (AB9)  … Our elders, they say, they migrate, into other area… for years, and then they come back … that’s what we’re experiencing now … back in early 80s, and mid 90s, there were hardly any bears … there’s too many polar bears now. (AR16) Bears can catch seals even—even if the—if the ice is really thin … they’re great hunters those bears … they’re really smart … they know how to survive”

6. “Though dietary changes have been attributed to sea ice changes limiting access to primary prey (ringed and harp seal; Thiemann and others 2008a), evidence for bears foraging on land-based foods (Dyck and Romberg 2007; Rockwell and Gormezano 2009; Gormezano and Rockwell 2013a) – reported as typical behaviour by most participants here – might also suggest an opportunistic feeding strategy (Thiemann and others 2008a).”

8. “Observations of bears consuming garbage are not uncommon (Russell 1975; Lunn and Stirling 1985; Gormezano and Rockwell 2013b)”