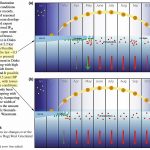 Share this…FacebookTwitterScientists have determined that today’s Arctic sea ice concentrations are still much higher than they have been for most of the last several thousand years, undermining claims that modern era Arctic sea ice changes are remarkable, unusual, or unprecedented.  Source: Kolling et al., 2018 In the graphical illustration of Late Holocene West Greenland sea ice […]