“As the sea levels have been oscillating, but not accelerating, in the long-term-trend tide gauges of Japan since the start of the 20th century, the same as all the other long-term-trend tide gauges of the world, it is increasingly unacceptable to base coastal management on alarmist predictions that are not supported by measurements.” – Parker, 2019 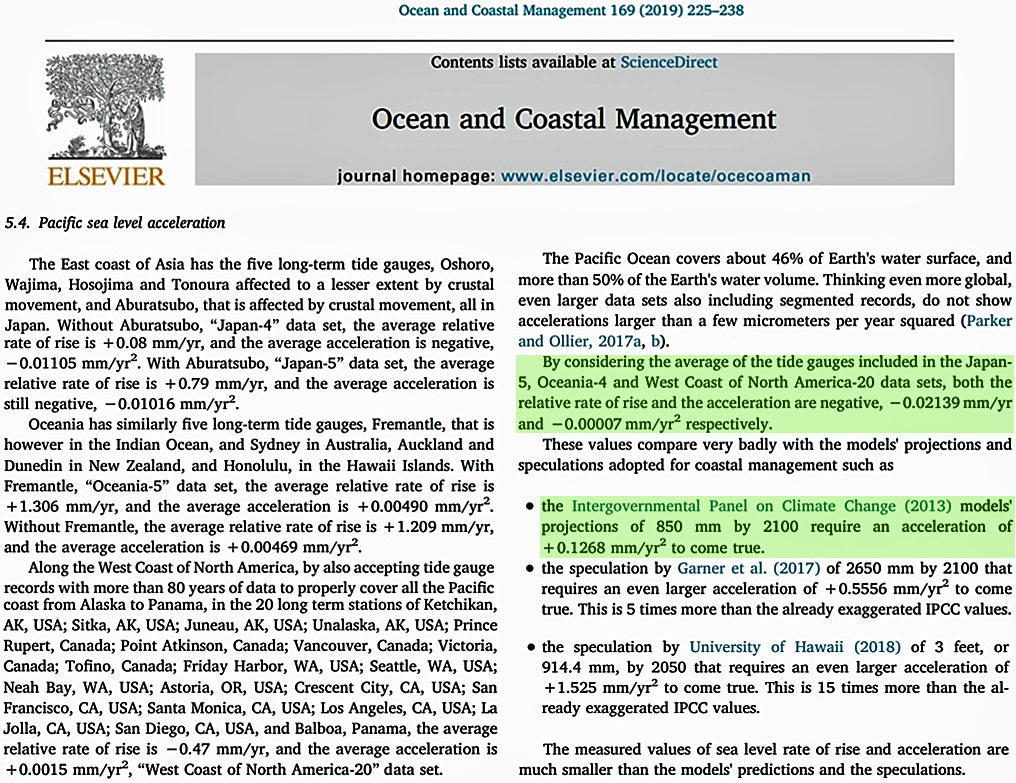 I. A Pacific Ocean-induced sea level rise catastrophe by 2100?

The Pacific Ocean encompasses more than half of the Earth’s water volume.

Anywhere from about an additional meter (IPCC, 2013) to multiple meters (Garner et al., 2017; University of Hawaii, 2018) of sea level rise by 2100 is assumed in climate modeling due primarily to the exponential rise in anthropogenic CO2 emissions since the late 19th century.

To achieve these catastrophic sea level rise amplitudes, however, both the rate of increase and overall acceleration will need to be elevated dramatically – by more than an order of magnitude – from that which has been observed in the last century.

• “Our analyses do not indicate acceleration in sea level in U.S. tide gauge records during the 20th century. Instead, for each time period we consider, the records show small decelerations that are consistent with a number of earlier studies of worldwide-gauge records. The decelerations that we obtain are opposite in sign and one to two orders of magnitude less than the +0.07 to + 0.28mm/yr accelerations that are required to reach sea levels predicted for 2100 by Vermeer and Rahmsdorf (2009), Jevrejeva, Moore, and Grinsted (2010), and Grinsted, Moore, and Jevrejeva (2010). Bindoff et al. (2007) note an increase in worldwide temperature from1906 to 2005 of 0.74 C.  It is essential that investigations continue to address why this worldwide-temperature increase has not produced acceleration of global sea level over the past 100 years, and indeed why global sea level has possibly decelerated for at least the last 80 years.”  (Houston and Dean, 2011)

II. Due to natural variability, relative sea level changes may only be gauged with long-term records

Pacific tide gauges sited in the same location for a century or longer (with consistent rates of subsidence or uplift) can qualitatively assess the overall rate or acceleration of sea level changes.

Shorter-term (less than 80 years) measurements may easily compromise the accurate computation of rate or acceleration trends due especially to the prominence of 60-year cycles of natural origin (Chambers et al., 2012).

Separating an alleged anthropogenically-forced sea level rise trend from natural variability has been a well-documented problem that has been intensively debated in the scientific literature.

• “Global sea levels have been rising through the past century and are projected to rise at an accelerated rate throughout the 21st century. This has motivated a number of authors to search for already existing accelerations in observations, which would be, if present, vital for coastal protection planning purposes. No scientific consensus has been reached yet as to how a possible acceleration could be separated from intrinsic climate variability in sea level records. This has led to an intensive debate on its existence and, if absent, also on the general validity of current future projections.” (Visser et al., 2015)

• “A proper coastal management requires an accurate estimation of sea level trends locally and globally. It is claimed that the sea levels are rising following an exponential growth since the 1990s, and because of that coastal communities are facing huge challenges. Many local governments throughout Australia, including those on the coast, have responded to the various warnings about changes in climate and increases in sea levels by undertaking detailed climate change risk management exercises. … It is shown here that the exponential growth claim is not supported by any measurement of enough length and quality when properly analysed. The tide gauge results do not support the exponential growth theory. The projections by the relevant state bodies should therefore be revised by considering the measurements and not the models to compute the future sea level rises for the next 30 years following the same trend experienced over the last 30 years.” (Parker et al., 2013)

It has already been suggested that an anthropogenic fingerprint has yet to be detected in Pacific Ocean measurements of sea level change due to the overriding presence of natural variability.

• “Sea level rates up to three times the global mean rate are being observed in the western tropical Pacific since 1993 by satellite altimetry. From recently published studies, it is not yet clear whether the sea level spatial trend patterns of the Pacific Ocean observed by satellite altimetry are mostly due to internal climate variability or if some anthropogenic fingerprint is already detectable. We show that subtraction of the IPO contribution to sea level trends through the method of linear regression does not totally remove the internal variability, leaving significant signal related to the non-linear response of sea level to El Niño Southern Oscillation (ENSO). In addition, by making use of 21 CMIP5 coupled climate models, we study the contribution of external forcing to the Pacific Ocean regional sea level variability over 1993–2013, and show that according to climate models, externally forced and thereby the anthropogenic sea level fingerprint on regional sea level trends in the tropical Pacific is still too small to be observable by satellite altimetry.”  (Palanisamy et al., 2015)

• “The tropical Pacific has featured some remarkable trends during the recent decades such as an unprecedented strengthening of the Trade Winds, a strong cooling of sea surface temperatures (SST) in the eastern and central part, thereby slowing global warming and strengthening the zonal SST gradient, and highly asymmetric sea level trends with an accelerated rise relative to the global average in the western and a drop in the eastern part. These trends have been linked to an anomalously strong Pacific Walker Circulation, the major zonal atmospheric overturning cell in the tropical Pacific sector, but the origin of the strengthening is controversial. Here we address the question as to whether the recent decadal trends in the tropical Pacific atmosphere-ocean system are within the range of internal variability, as simulated in long unforced integrations of global climate models. We show that the recent trends are still within the range of long-term internal decadal variability.” (Hadi Bordbar et al., 2016)

Further supporting the conclusion that an anthropogenic fingerprint has not yet been detected in sea level data, a compilation of records from 30 long-term Pacific Ocean tide gauges has been made available in a new paper (Parker, 2019) published in the journal Ocean and Coastal Management.

The averaged measurements from these 30 tide gauge instruments reveal a negative trend in both the rate of sea level rise (-0.02 mm/yr) and acceleration (-0.00007 mm/yr2) since the early 20th century.

Observations of negative sea level trends for the Earth’s largest ocean basin while CO2 concentrations rose from about 300 ppm (1900 C.E.) to well over 400 ppm obviously do not support the narrative that says anthropogenic CO2 emissions are a driver of relative sea level changes.

Climate model-based projections of meters of sea level rise by 2100 promulgated by proponents of human-induced climate alarm may therefore be categorized as both speculative and dubious.

since the start of the 20th century

“Recently the Japan Meteorological Agency (2018) reported an analysis of the measured sea levels around Japan in the stations less affected by crustal movement. It showed substantial stability of sea level since the early 20th century.”

“The Japan Meteorological Agency (2018) has shown that the relative rise in sea level on the coast of Japan has stabilized since the beginning of the 20th century and has not accelerated. The analysis presented here has further strengthened this result. We have also shown that the only accelerating record, the one of Hamada, is an artifact ofcoupling of the long-term tide gauge record of Tonoura, discontinued in 1984, with the short, recent tide gauge record of Hamada II, established in 1984. This latter result is consistent with the findings of Okunaka and Hirahara (2016). They verified by correcting by GPS data the tide gauge results at 3 stations, that a sea level rise of Japan was estimated largely due to the subsidence at Hamada.”

“The relative sea level rise measured by a tide gauge has a sea and a land component. The relative sea level may rise, or fall, not only because the volume of the water is increasing, or reducing. It may also rise, or fall, because the tide gauge instrument is sinking, or uplifting. The sea component has important multi-decadal periodicities of quasi 60 years. Hence, not less than 60 years of data are needed to infer a rate of rise, and many more years, not less than 100 years, are needed to infer an acceleration. … Only where the land component is characterized by a stable pattern of subsidence or uplift, an absolute sea level rise can be computed. In Japan, only few areas are relatively stable, with the rest affected by crustal movements strongly variable in time and space.”

“The Pacific Ocean covers about 46% of Earth’s water surface, and more than 50% of the Earth’s water volume. Thinking even more global[ly], even larger data sets also including segmented records, do not show accelerations larger than a few micrometers per year squared (Parker and Ollier, 2017a, b). By considering the average of the tide gauges included in the Japan5, Oceania-4 and West Coast of North America-20 data sets, both the relative rate of rise and the acceleration are negative, −0.02139 mm/yr and −0.00007 mm/yr2 respectively. These values compare very badly with the models’ projections and speculations adopted for coastal management such as

The measured values of sea level rate of rise and acceleration are much smaller than the models’ predictions and the speculations.” 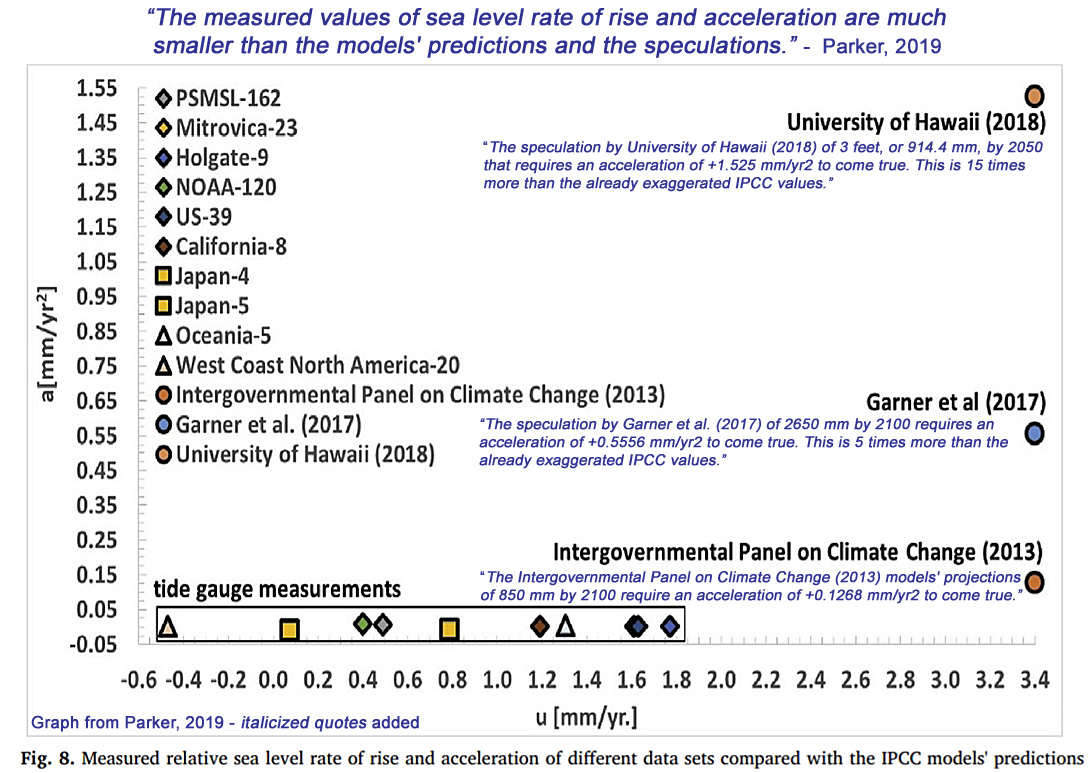 23 responses to “Pacific Ocean Tide Gauges Of 100+ Years: ‘Both The Relative Rate Of Rise And Acceleration Are Negative’”